Bargi reservoir no longer has enough fish stock. Is it because fishers have been kept out of its management? 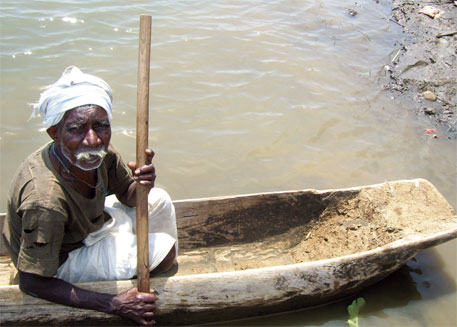 Ram Prasad Burman of Barghat village is back from fishing in the Bargi reservoir on the Narmada. He has caught three medium-size fish, barely weighing two kilogrammes. “That is the reward for a whole night’s work,” he says bitterly, receiving Rs 30 from the fishers’ cooperative of his village. His neighbour Rekha Burman has nothing to show but a net full of commercially worthless chehal—a tiny local fish variety. “The whole lot will not weigh more than 250 g,” she says ruefully. “I had better take it home for lunch.”

At the collection centre close to the dam, Nathu Lal Patel, president of Barghat Fishers’ Cooperative, is worried. “Twenty-six kishtis (fishing boats) have arrived since morning and we have received just 10 kg of fish,” he says. “There is no fish in the reservoir.”

In the upstream Piparia village, a small pick-up truck belonging to a fish contractor is returning with just one crate full of fish. The remaining 20-odd crates piled in the truck bed are empty. “This fish is not worth the fuel cost of collecting it,” says an employee. In the village, Raghubir Burman, who heads the Piparia fishers’ cooperative, brings out a golden fish trophy in a glass case. “The Madhya Pradesh Fisheries Federation gave us this award last year for catching 18 tonnes of fish,” he says. “It felt like mockery. Ten years ago, 25 tonnes was the minimum catch of each fishers’ cooperative around the Bargi.”

Once teeming with fish and offering a decent livelihood to some 3,000 fishers in its vicinity, the Bargi reservoir in Jabalpur district is losing its fish stock at a rapid pace. While officials blame fishers for overfishing, the community alleges the state fisheries federation is mishandling the reservoir and is pushing it towards deterioration.

It was a cooperative success

Traditionally, communities around the Bargi depended on fishing in the Narmada for living. After the dam came into being in 1992, the government leased fishing rights in the reservoir to private contractors. This led to intense agitations by nearly 100,000 people displaced for the dam. In 1994, the state government succumbed to the pressure and agreed to give fishing rights in the reservoir to the displaced families on cooperative basis. Soon, 54 village fishers’ cooperatives with 3,000-odd members were registered. To facilitate functioning of the cooperatives and create cooperation among them, the state government replaced the Madhya Pradesh Fisheries Board with Madhya Pradesh Fisheries Federation, set up under the Cooperative Societies Act. 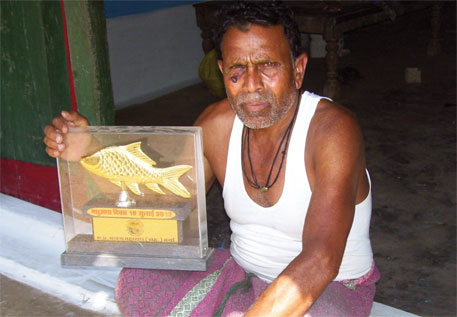 The fishers also created an umbrella marketing body, called Bargi Bandh Visthapit Matsya Utpadan Evam Vipanan Sahakari Sangh. Fishing officially began in October 1994. Under the agreement, fishers were allowed to retain 20 per cent of their catch for consumption, while the Sangh marketed the rest by paying a royalty of Rs 6 per kg to the state government. The endeavour proved successful. At the outset, the Sangh raised fishing wage from Rs 8 to Rs 10 per kg. In the first year, the government received a royalty of Rs 22 lakh. As catch from the Bargi increased by 100 tonnes within a year, the Sangh raised fishing wage further. Fishers’ earnings went up from Rs 25 lakh in 1994-95 to Rs 47 lakh.

Till 2000, the fishers caught between 430 tonnes and 530 tonnes a year from the reservoir, and the Sangh had raised their wage to Rs 14.50 per kg. It had also introduced a mechanism to make sure that fishers receive deferred wages during the spawning season from June to August when fishing is not allowed. The Sangh would deduct Rs 1 per kg from the fisher’s wage during the fishing season and pay it back during the closure period, ensuring them a steady income. But the success story did not last long.

In 2001, directors of the federation went to court against the Sangh. Their petition stated that the production average of the Sangh is 40 kg per ha, which is far lower than the state average of 62 kg per ha. Besides, the Sangh has not increased fishers’ wages in proportion to the market rate. The court allowed the federation to manage the reservoir for a year. And here began the troubles.

“The federation had moved court for raising catch and fisher’s wages. But soon after getting control of the reservoir in 2000, it dropped the catch target by almost half. This shows they had no intention of improving the fish stock,” says Munna Burman, president of the Sangh, which is now nearly defunct. Since 2001, there has been a drastic drop in the fish catch from the Bargi. Fishers say the reservoir does not have enough fish to meet even the reduced target (see ‘Dwindling hope’ on facing page). 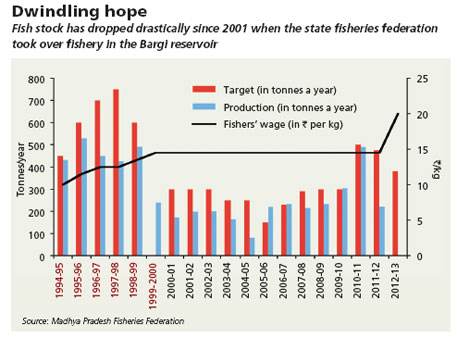 What’s more, fisher’s wages remained frozen at Rs 14.50 till 2006. It’s only after repeated agitations that the federation revised the wages in 2011—Rs 25 per kg of fish weighing more than one kg and Rs 15 per kg for smaller fish. Fishers say this is too low for sustenance considering the low catch. The federation also ignored the fishers’ rights to retain 20 per cent of the catch for consumption and discontinued the deferred wage system instituted by the Sangh.

“The federation can only float tenders and award contracts,” says Rajkumar Sinha of Narmada Bachao Andolan, who has helped the fishers organise. “The officials have little knowhow about the nitty-gritty of fishery. Their rules are not conducive to sustainable management, for which the fish stock is dwindling.” For instance, Sinha points out, the federation bars catching commercially important rohu, katla and mirgal if they weigh less than 1 kg. But there is no rule for size in other fish. With catch dwindling, fishers are taking advantage of this loophole and catching other popular fish even though they are undersize. As a result mahaseer, gigra, balai, baam, patola and kari are disappearing from the reservoir, he adds. 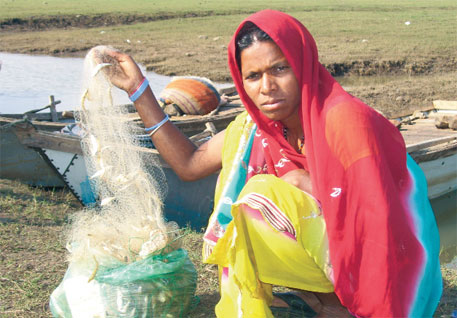 In recent years, in view of falling yields, the federation has banned the use of jhulni (fine mesh) nets. “Their logic is that these nets take out fish seeds along with small fish like morela, rekharia and chehal. But the ban has proven counterproductive,” says Raghubir Burman. The president of Piparia fishers’ cooperative explains that since small fry multiply fast, it is important to periodically remove them to restore the balance of fish population. Earlier, fishers were allowed to use jhulni nets December onwards, six months after seed release. By that time the fingerlings are large enough to be identified and released if caught. This apart, small fry provide livelihood to about 1,000 people around the reservoir, he adds.

Fishers say lack of protection during the breeding season and irregularity in release of fish seeds are two major reasons for the drop in fish stock. “During the Sangh years, fishers would take every possible step to prevent illegal fishing during the closure season. They even faced violence,” says Sinha. But now, the bad elements have evolved into a veritable mafia supported by rich contractors from outside due to lax protection, he adds. “They fish with fine mesh nets during the breeding season, stripping the river of brooding fish, hatchlings and fish seed,” says Shyamlal Burman of village Padmi. “They carry weapons, so all are afraid of them.”

There is also lack of transparency and participation by fishers in the fish-seed release process. According to rules, 3.5 million fingerlings should be released into the reservoir annually jointly by the federation and the fishers’ cooperatives. “But officials never allow us to handle the seed,” says Nandlal Burman, a fisher from Tatighat village.

When quizzed in this regard, federation’s regional director, R K Gupta, denied the allegations. However, a federation employee, who did not wish to be named, said that fish seed released into the Bargi is not always of good quality. In the absence of local hatcheries, it is carted all the way from Kolkata and many fingerlings die on the way.

The fishers have long been demanding that the federation purchase fish seed from local fishers, set up hatcheries and conduct a scientific study into the reason for dwindling fish stock. But the federation has not paid attention to their concerns, says Sinha.

When asked about the fishers’ allegations, state fisheries minister Ajay Bishnoi told Down To Earth tersely that fishers should take over management if they are not satisfied. He, however, refused to comment on the hurdles to a participatory approach.

Fishers say participatory approach is the only way to restore fish stocks in the Bargi. “There is no evidence to suggest that private contract system has benefitted the fisheries sector in the state,” says Munna Burman. “In fact, a 2007 study by the Narmada Valley Development Authority recommends replacing private contract system with participatory fisheries management system.” But, it seems, the government is in no mood to take fishers on board at the moment.