Who follows the public hearing procedures? Neither the government nor the project promoters 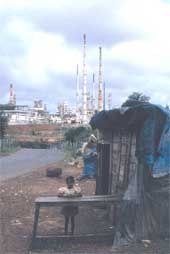 In the early 1990s, the Birla-led Indo-Gulf Fertilisers Limited was scouting for land near Mangalore to establish a copper smelter plant. Tokur and surrounding villages near Baikampady were proposed as a possible site, an area full of paddy fields and plantations. In 1994, the Dakshina Kannada Zilla Parisarasakta Okkoota ( dkzpo ) -- a district environment federation of people's organisations at various levels -- argued on the grounds of inappropriate siting and in the public hearing, a provision of which was there in the 1994 notification. On the basis of the hearing, the government decided not to clear the project. Initial euphoria, however, soon gave away to a string of disappointments.

Well - connected by rail, road, water and air, Dakshin Kannada district of Karnataka is an investor's haven. But the district -- which is blessed with the Arabian Sea, the verdant Western Ghats and where rivers, streams and estuaries abound -- is also plagued with a host of controversial 'development' projects (see table: Flashpoint Karnataka ). But the system of public hearing has continues to 'used'. Whether the people are being heard is a different story altogether.

Power struggle: Consider Cogentrix Incorporation, usa , which finally pulled out in December 1999 after hogging the limelight for seven years. Cogentrix's India project, Mangalore Power Company ( mpc ) -- the company still exists -- is a us $1.3 billion joint venture with China Light and Power Company of Hong Kong. The 1,000-mw coal-fired power plant is to be located at Nandikur-Padubidri near Mangalore. Ever since the state government signed the Memorandum of Understanding for the power project in 1992, local communities have strongly resisted the project on grounds that the proposed location is an environmentally-fragile estuarine zone. "Even within the government, some officials spoke against it, yet the government went ahead with the project," says M K Ramesh, head, Centre for Environmental Education, Research and Advocacy at the National Law School of India University, Bangalore.

Saldanha says in 1995, the state minister of forests was Siddanha Gowda. He called a filmstar and the chairperson of Karnataka spcb . The three went to Mangalore, sat in the Circuit House, called for a few more people and said this is a public hearing. When the people got wind of it, they protested. The meeting was called off saying a 'joint' hearing would be held later. "But based on the hearing, a noc was given by kspcb in 1996 and the mef cleared the project, too," says Saldanha.

Cogentrix finally pulled out of the project a year ago. Interestingly, the reason for Cogentrix walking out of the project is not public protests. According to Ranjan Rao, the Karnataka hc in early 1998 ordered a Central Bureau of Investigation ( cbi ) inquiry based on allegations of corruption levelled against the promoters by consumer activist Arun Agarwal. Negating wide public opinion favouring an inquiry, the state government went on appeal against the hc decision in sc , which stayed the order and reserved judgement after several hearings. But Cogentrix pulled out soon after. "Nobody had stopped their project from coming through and there was no stay order. They could have gone ahead but they preferred not to because they did not want a cbi inquiry. So it is a wrong notion that they have walked out because of protests," says Rao.

Trouble in the pipeline: Another storm is brewing not just in Dakshin Kannada but in six other districts too is over a proposed petroleum pipeline between Mangalore and Bangalore. Mangalore Refineries and Petrochemicals Limited ( mrpl ) was one of the first mega-industries to be set up in the region.

Hindustan Petroleum Corporation Limited ( hpcl ), which also holds equity in mrpl , markets its products. The controversy is over the proposal to lay a 364-km underground pipeline between Mangalore and Bangalore to transport petroleum products at the cost of Rs 800 crore. The pipeline will pass through 243 villages in 17 talukas across seven districts -- through the mountains of the Western Ghats and prime agricultural land. This, among many other things, has enraged farmers and environmentalists alike. Project proponents maintain that the pipeline is the 'least harmful' mode of transportation and will also minimise the risk and burden of transporting by trucks and tankers.

So far, five public hearing have been held. In the Bangalore hearing on May 20, 1998, under pressure, the deputy commissioner asked kspcb to make all the required documents available to the public. But, of the executive summary provided to the people, says Somnath of the nst -Belthangady, "It was full of factual errors and inadequate information. It did not even include a map indicating the route of the pipeline, only a general direction and some names of places."

dkzpo has demanded that the current route earmarked for the pipeline be changed because it passes through prime agricultural land and forests. "When the present route was drawn no one was consulted. When people asked, they were told that it was a Central government project," says Manohar Prasad, a journalist and member of the district public hearing committee. dkzpo has also demanded a detailed consultation with the village panchayats , zilla panchayats and affected people. Thereafter, a fresh public hearing should be held. Currently, according to Somnath, the survey is still going on.

Barging in: So far, three barge-mounted power plants ( bmpp s) have been proposed on the Gurupur river that drains into the Arabian sea at Mangalore. Suresh Prabhu, during his tenure as Union minister for environment and forests, cleared the first one, Tanneerbavi, on an "experimental basis". "How can you commit a blunder on an experimental basis?" questions Upendra Hosabettu, another leader of a fishing community. The mandatory public hearing was not conducted for this project, the 170-mw plant of the us -based Chicago Power Company and currently under construction. The rapid environmental impact assessment ( reia ) is also erroneous. "Contrary to what has been cited, the site has productive lands with paddy fields and the nearest human settlement just half-a-kilometre away," says Yatish Baikampady, a leader of a fishing community in Dakshin Kannada. Currently, the construction of the plant is going on in full swing.

The second proposed bmpp is at Bengre. Straddled between the river Gurupur on one side and the mighty Arabian Sea on the other, Bengre is a strip of land inhabited by some of the most strong-willed people. It is also here that the Netravati river, the lifeline of Mangalore city, meets Gurupur before the two drain into the Arabian. Perhaps, for all this reason and more it hasn't been able to stay off the limelight. It is a do-or-die battle for the 20,000-odd people who inhabit the Bengre.

Smith Cogeneration of the uk has proposed the 170-mw power plant. A public hearing was called on November 6, 1998, but postponed for November 23 "due to unavoidable circumstances". The hearing was one of the biggest ever, with more than 5,000 people attending it, says Ranjan Rao. "The reia was erroneous but officials dismissed it as typographical mistakes," says Ranjan Rao. In spite of all this, it has got kspcb clearance. But the company officials have not shown their face ever since. "What is stopping them from coming?" asks Shantaram, a local fisherfolk. Undoubtedly, it is the might of the fisherfolk they fear, well-organised under the Mogaveer Mahajan Sabha, an organisation of fishing communities. In Bengre, they have vowed not to let project promoters or government officials anywhere come close to their village.

The third in the series is a 195-mw plant by Euro India Canara Power Company. The public hearing for the project was held on December 1999. A large number of people turned up and voiced their apprehensions, but nothing is known further about it. The dredging to be undertaken for the project would include an estuary, which serves as a breeding ground for fishes, says Baikampady.