The government's drought relief programmes are bound to fail in the long run. Even the Planning Commission acknowledges that funds for the drought relief is becoming illegal income for officials, politicians and contractors 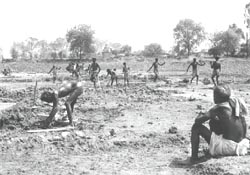 The biggest hurdle in providing the much-needed drought relief is corruption in the government machinery. Rajasthan has spent almost Rs 6,500 crore on drought relief works like employment generation, fodder distribution and drinking water facilities in the past 45 years. Another Rs 628 crore has been spent in the last 27 years to stop the spread of the Thar desert. But there is no impact. Three of the districts in the Thar, Jodhpur, Churu and Barmer, have had drought in 31 of the past 38 years. The state government admitted that there were huge leakages in its drought relief works last year, and officials say at least 30-40 per cent of the money never reached the people.

In the case of the districts in the Nasik division of Maharashtra, the public distribution system ( pds ) has collapsed. Recent raids on some pds shops revealed that the foodgrain meant for drought-hit tribal people was being diverted to black market. It might have caused the food scarcity in a drought year, which claimed the lives of 8,000 children. "Today Rs 60 out of Rs 100 in wage schemes is reserved for wages, but in reality only Rs 10-15 actually goes to the poor worker, the rest is illegal income for bureaucracy, contractors and politicians," notes the approach paper of the Planning Commission for the Tenth Five Year Plan. Whatever actually reaches the people in the name of drought relief is not spent wisely, and doesn't go a long way in drought-proofing.

"Drought is not like most other disasters: it can be seen coming, slowly, from a long way off," wrote Lloyd Timberlake in Africa in Crisis , a book on drought in Africa. India has seen it come for almost 5,000 years. How can such a frequent phenomena become a disaster in Rajasthan, where drought extended to 16 of the last 20 years? Drought becomes an annual disaster when effort is not made to drought-proof -- provide long-term relief against drought. This can be done by regenerating the natural asset base in villages, in other words, good management of land, water and forest so that there is a buffer for times when rains are below normal. But when drought occurs in the absence of drought-proofing, the only thing to do is to make sure that it doesn't become a famine. In times of famine, food for work programmes are used to provide employment, so that the people have money to buy food, water and fodder. Over the years, the Indian government has devised numerous schemes built on this concept.

India has more than a dozen programmes with a budget outlay of more than Rs 11,000 crore per year to fight drought and reduce rural poverty. The magnitude of the current drought indicates that these programmes have gone haywire somewhere. "The government emphasis is on developing infrastructure like roads and buildings. It didn't focus on the real assets of communities," says Koda Ramakrishna Reddy, expert on minor irrigation projects at the Krishna Deva Raya University, Ananthapur, commenting on drought relief work in Andhra Pradesh.


The first drought management programme in India, the Rural Works Programme, was started in the 1950s (see box: Programmed for drought ). Its focus was employment generation. It was rechristened as the Drought Prone Area Programme ( dpap ) in 1974, with the focus shifting to using employment generation for creation of assets. A recent audit report by the Comptroller and Auditor General of India shows dpap has consumed Rs 2,195 crore since 1974 (see table: Money down the drain ). Yet drought-prone area has increased from 55.3 million hectares (mha) in 1974 to 74.6 mha in 1995. Since 1995, 5. 9 mha has got added to it. This is besides the 2.6 mha which is under the Desert Development Programme ( ddp ), which started as a programme to revive the ecology in hot and cold deserts. According to estimates of the Planning Commission, up to the end of the Eight Five Year Plan, about 16.5 mha rainfed/ degraded land was treated. However, the net sown area has remained stagnant at about 142 mha. It is estimated that this might be due to an equal area getting degraded every year.


The high-level Hanumantha Rao Committee was set up in 1994-95 to review dpap and ddp . The committee observed that these two programmes had failed grossly, and recommended their implementation on watershed basis with people's participation to make the programme sustainable.dpap created physical structures that are either useless in drought-proofing to begin with or become useless without the social institutions to take care of them. Thus once the programme is withdrawn, it is back to square one. The second most important hurdle is that the programme works on a target basis. So, if 500 hectares has to be treated in five years, it would mean four years of activities and one year of gradual withdrawal. By the time the government withdraws, the structures are ready, but the village community is not organised enough to maintain it. A major survey of 70 villages in Maharashtra and Andhra Pradesh by the Indian Council of Agricultural Research ( icar ) in 1998 found that increase in agricultural production due to watershed development activities lasted no more than two years. It brought into focus the post-project bankruptcy in institutions at the village level.

"Strict orientation to achieve physical targets leaves field staff little time to promote social organisation," says the icar report. To make village institutions mature enough to take up watershed development more intensely, a watershed development fund was created in 2000 and the National Bank for Agricultural and Rural Development has been entrusted to take up 100 districts in three years. One-third of the money would be spent in empowering watershed committees. According to a undp report on environment regeneration and poverty alleviation, it takes 10-15 years for a village to regenerate its ecology and create prosperity. Villages such as Ralegan-Siddhi in Maharashtra and Raj-Samadhiyala in Gujarat have put in more than 15 years of efforts to insulate themselves from drought.

Fund crunch and institutional vacuum at the village level can threaten major watershed programmes, like that of the Madhya Pradesh government, perhaps the world's largest watershed development mission. The highly participatory programme's success has been measured by the regeneration of one of its most backward and drought-prone districts: Jhabua. Without a realistic time frame to put the ecology on a sustainable path and in the absence of empowered village institutions, Jhabua might see a reversal of fortune.

The first phase of the programme is over and 69 watersheds have been handed over to the community. But an evaluation by the Dahod-based N M Sadguru Foundation shows that due to absence of mature institutional backing, the impact of the programme might disappear in the long run. On the funding pattern, the evaluation report says that in all the sample watersheds, money was not available to take up all the activities drawn up in the project report. In October 1999, the first phase of funding under dpap stopped and by this time most of the watersheds in the districts had hardly completed 40 per cent of activities as mentioned in the guidelines.

To meet their targets, the district authorities took up the development of 113 watersheds with the money sanctioned for 54. "With the restraint in flow of money, the interaction between the villagers and the government collapsed," says Jam Singh, a former member of the watershed committee of Kakradara village, one of the most successful watershed villages in the district. Out of its 650 residents, 400 have migrated for the second consecutive year. Badli Bai, who was heading the once thriving women's thrift group in the village, says, "The awareness created in the last four years can't die. But, what we need now is a few more years of help to make our village self-dependent." One programme that can address this concern is the Jawahar Rozgar Yojna ( jry ), which for the first time gives the relief funds in the hands of the village councils.


jry was launched on April 1, 1989, by merging two other employment generation programmes. It was for the first time that local government institutions ( panchayat s at the village, block and district level) were given the charge of implementing employment generation programmes and also to maintain the assets created. While 70 per cent of the project fund was given directly to the village councils, the remaining was allocated to the block- and district-level panchayat s.

Financial bungling at the district level by government officials and, in some cases, by panchayat members, however, have made the project a huge failure. According to an evaluation by the Union ministry of rural development between June 1993 and May 1994, jry generated an average of 11 days of employment per person per year.

According to an assessment by the Planning Commission, the programme did start a process of community involvement and management in structures created by the programme and evoked a response from elected representatives. "It was an experiment to gauge the response of the village-level leaders. And it was encouraging," says NCSaxena, secretary, Planning Commission. But, the way the programme is designed has left enough scope for the district bureaucracy to manipulate it. A panchayat has to get projects technically certified before implemention begins, and then again after implementation. This only led to delays and harassment of local leaders. "Unless technical officials are also transferred to the panchayat s along with funds and functions, such dependence on bureaucracy will continue and will not be in the interest of effective implementation of anti-poverty programmes," the Planning Commission warns.

One decade later, the government has renamed the scheme Jawahar Gram Samridhi Yojana to create more wage employment and more village structures. In this new incarnation, jry wage generation was made secondary and creation of infrastructure to create sustained employment was made the priority. Again nothing substantial changes were made to the jry to right its shortcomings. Rather, it strengthened the district bureaucracy's control over the programme. Under the new programme, designed as an integrated rural development programme, villages still don't enjoy absolute autonomy. The district bureaucracy still has control over panchayat s. And the bureaucracy wrested control by bifurcating the money through the eas .