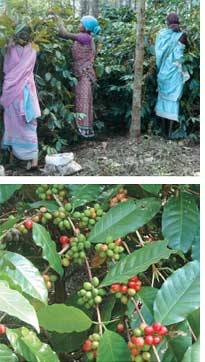 An individual promises to make Orissa the coffee hub of India

Koraput, circa 1987 the landscape comprised gorges, ravines, gullies and rocks. Breathing life into the hostile terrain, Pradeep Kumar Mohanty, a botanist-turned farmer, ventured into organized coffee plantation in the district two decades ago. The effort has transformed sleepy tribal hamlets such as Sundhiput and Nuaput and several others in the district into active agricultural zones. But coffee plantations had existed even before Mohanty made his mark. In the early 1960s, Orissa government's soil conservation department tried out the crop but the initiative lacked professional approach. Local residents give credit to Mohanty for filling up this gap in coffee cultivation practices in the region.

Today, about 72 hectares (ha) of his verdant plantation on the foothills of Deomali range in the Eastern Ghats, producing about 45 tonnes of coffee annually, say local people, represents "Koraput coffee". The lush green silver oaks and albizzia trees provide shade to the coffee plants and add to the beauty of the landscape that includes check dams and storm drains.

Affectionately addressed as 'coffee budha' (coffee patriarch) by the local people, Mohanty, inspired by stories of foreign planters, left his doctoral thesis at the Central Rice Research Institute, Cuttack, midway in 1982 to begin tour of the entire state to locate land for his "dream project". He found his destination in Sundhiput. With no roads and electricity, Mohanty operated from a borrowed portable tent trying to convince the non-tribal locals to sell him fallow tracts since there were several restrictions on sale of land that belonged to tribals. Initially he managed to get about 10 ha in 1987. Then he bought more land in the adjacent Nuaput village and involved tribals and non-tribals in his pursuit.

Besides coffee and organic farming, Mohanty also trained villagers to guard against malaria and snakebites, common during monsoons. "Quacks would mislead us, which resulted in loss of lives. Mohanty first advised us to go to doctors and take anti-malarial medicines. Also, we don't go to moneylenders anymore. We work in his plantation and get paid," says Kaushalya, a tribal woman from Nuaput who works on Mohanty's farm. The farm still doesn't get electricity regularly. "Yes, it was very tough in the initial years. But I knew what to do with the hostile terrain. Through scientific plantations, I was able to convert the adversities to advantages," says Mohanty. "I went to banks. They were not interested to give loans to a debutant planter in an inhospitable terrain. I was forced to try lentils like rajma and various vegetables to survive as it takes five years for coffee beans to grow," Mohanty recalls. However, later, a bank partly financed his farm.


Mohanty is not the lone ranger now. Many individuals from cities and other locals have started growing the crop. They even have a trade union called the Orissa Coffee Growers' Association. But what is still "shocking", says Mohanty, is the state's indifference to coffee cultivation, given that districts such as Koraput, Keonjhar, Rayagada, Phulbani, Gajapati and Kalahandi offer ample scope for its growth.

He adds that a non-traditional coffee belt like Orissa is best suited for the crop because traditional coffee growing states, including Karnataka, Kerala and Tamil Nadu, have reached a saturation point due to pressure on land and cost of labour. "Like Andhra Pradesh, it's the opportune moment for Orissa to expand and invest in the coffee sector as we have land and have relatively low labour expenses. "

The volume of coffee produced is also a problem. "Orissa produces around 250 tonnes of coffee beans per year, which is why planters like me are not able to export. I have to depend on Bangalore-based handlers. If the government extends support, I'm sure Orissa will become the country's coffee capital in future," says Mohanty. "I know how to do it," he adds.