Cities without cars, pollution and traffic. A movement is spreading across Europe to drive cars out. People are beginning to say no to cars 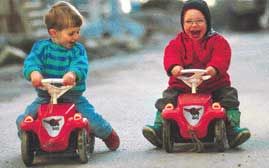 When Hannes Linck moved in August 1999 to Quartier Vauban, a newly-built neighbourhood in the southern German city of Freiburg, he decided to sell off his car. Hannes lives with his wife and two children in a flat built by a housing cooperative and he does not regret his decision. There is a bakery, a cooperative shop, a newspaper stand, a supermarket and a weekly peasants' market, all within walking distance. To the city centre, it takes him 10 minutes by bike, and there is a bus stop right at the quarter's main entrance. As a member of a car sharing company, Hannes can avail of a car any time. After making a reservation by phone, he goes to the garage where the cars of the company are parked, takes the car keys from a box and drives off. For transport needs, he can even get a small truck.

One of the most striking sights of Quartier Vauban is the number of children roaming around in the lanes on their own, playing and biking. There are no cars, no parking lots in front of the houses, no garages. The road is a riot of bicycles, toys, buggies, tables and benches, small trees and bushes. Without cars and traffic, the lanes have become an extension of the living room. A meeting place and a playground without fear of accidents.

Like Hannes, today pedestrians are back to many inner-city areas of European towns which are free of cars. In Bonn, Bologna or Vienna, access to several streets in the main shopping areas is restricted for private cars. Delivery to shops, departmental stores and supermarkets is allowed only in the morning hours. Underground garages and parking lots have been made expensive to discourage the use of private cars when going for shopping. City centres are becoming attractive again for strolling and shopping. Weekly markets have revived, streetside cafes and restaurants are reclaiming the streets from the cars.

These inner city areas are "small islands" in an otherwise nightmarish urban traffic snarl. Hannes, who is also the secretary of the Association of Car-Free Households, says that he especially enjoys the serene surroundings free from air pollution and clamour. The community life, the proximity with his neighbours. The extra space adds to his comfort.

When the former French military camp Quartier Vauban was bought by the municipality of Freiburg in the early 1990s for a housing project for 5,000 people, it was a local groups' and citizens' initiative, which introduced the concept of car-free living.

Actually, the quarter is not fully car-free, as people with and without cars stay here. But car-owning residents are not allowed to park their car in front of the house. They have to pay a hefty amount for a parking lot in a garage at the fringe of the quarter. Residents without a car just own a "virtual" parking space, a compromise that was necessary to satisfy building regulations. Every non-car owner buys a few square meters of a meadow nearby, where parking slots could be built later in case he would decide to buy a car. But this has not happened yet. Instead, a few car owners have sold their cars.