Iconic paan no more appeals to farmers, traders and common people. They say the contagious spread of chewing tobacco, especially gutkha, is fast taking over the paan market. Farmers have more reasons to shy away from the crop once referred to as green gold. Skyrocketing input costs, water scarcity and unpredictable weather mean betel gardens are no more lucrative. 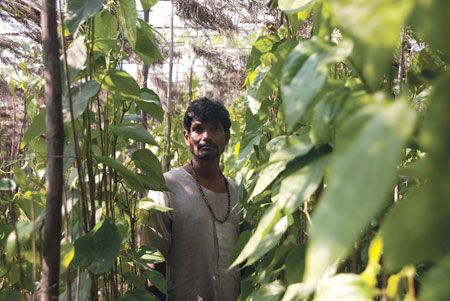 The way paan is associated with India, a Chaurasia is associated with paan. But both the equations are changing, said Lalta Prasad Chaurasia, spitting blood red betel juice into an elegantly designed brass spittoon. The 58-year-old is among the last generation of Chaurasia farmers in Mahoba district of Uttar Pradesh who have witnessed betel leaves yield a fortune. Both betel leaves and the Chaurasias are an integral part of Mahoba’s history. The district is known for its betel gardens and the Chaurasias are India’s exclusive community devoted to betel farming. But they are now finding it difficult to sustain the family occupation.

Till a decade ago, Lalta Prasad’s betel gardens extended over a hectare (ha). Now his son grows the vine on just a third of the farm. Kamlesh Chaurasia, another young farmer in Mahoba, has reduced his farm size to a decimal (0.004 ha) from nearly a hectare of betel garden he inherited a decade ago. “It is difficult to manage even this small patch,” he said. The region is suffering from seven years of drought.

Betel leaf cultivation requires regular watering: four times a day in summer and twice a week in winters. So the gardens are traditionally situated near water sources. But the prolonged drought has dried up most ponds and dug wells in Mahoba. Every day Kamlesh walks about 50 times to a nearby drain to fetch water in a vessel to irrigate his farm. “I can’t afford a diesel pump or labourers. But I have to depend on the farm as it gives me some income throughout the year,” said Kamlesh who earns about Rs 400 a month. “Sticking to betel leaf will not be a good idea. As such, fewer people consume paan these days.”

Once every three days, Kamlesh plucks tender betel leaves from his garden, neatly stacks them in a basket and takes them to a 200-year-old paan mandi (betel leaf hub) in the district headquarters. It is called Paan Bazaar. 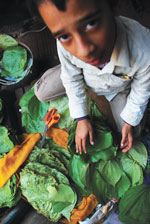 Till a decade ago, as many as 100 traders from across the country would visit the Paan Bazaar every day to bid for the famous Mahoba paan. But over the years the hustle and bustle has died down. The godown built to store betel leaves is in ruins. The paan shops around are mostly owned by people who have abandoned betel farming. But more than paan they sell gutkha, a concoction of areca nuts, tobacco, lime and flavours. In 2005, the local betel leaf traders’ association decided to trade only thrice a week. “Since betel leaf cultivation has drastically come down, there was no need for a regular market,” said Rakesh Chaurasia, a member of the association. The market is now called subzi (vegetable) market.

Betel cultivation is declining in the state, said D S Yadav, district horticulture officer of Mahoba. Uttar Pradesh is the largest consumer of paan and 15 districts grow the vine on 2,000-2,200 ha. In Mahoba alone, Yadav said, 800 farmers were growing betel on 180 ha in 2000. Just 234 are growing the vine on 80 ha this year. In Lalitpur district, the area under betel leaves has decreased by 20 ha in the past one year. “The continuous decline is due to several reasons beginning with extreme weather and shortage of water,” said Yadav. For instance, the sudden dip in temperatures between January 1 and 12 this year ruined over 80 per cent betel vines in Mahoba. Officials said the area under betel cultivation is set to shrink further because farmers are now left with very few cuttings to begin a new crop. Once planted, the perennial crop can be harvested for four-five years.

The trend of chewing gutkha has also influenced the fall in demand and cultivation of paan, Yadav added.

Betel leaf is not losing its charm for farmers in Uttar Pradesh alone. A few hundred kilometers away, another Chaurasia has severed his traditional link with betel leaves. Guruprasad Chaurasia’s father had left his ancestral home in Gorakhpur in Uttar Pradesh in the 1950s to make a career in the booming betel leaf trade. Jaleshwar town in Balasore district of Odisha gave him a head start. But within a generation, Guruprasad is out of the family trade. He now repairs televisions and runs a grocery store.

Till a decade ago, Guruprasad recalled, scores of supply agents would procure the Jagannathi patta (leaf) from farmers in Jaleswar and supply to paan mandis in Lucknow, Varanasi, Mumbai and Delhi. The supple variety of betel is grown on the sandy soil of Odisha within half a kilometre from the coast. Its cultivation was strengthened by the arrival of businessmen like Guruprasad’s father from Uttar Pradesh in the 1950s. During the mid-1980s, a family could earn as much as Rs 20,000 a month from a three decimal farm, or baraj as it is called after the migrant Barajia community from West Bengal who introduced betel cultivation in Odisha. That was the time when even fishers set up betel farms in their homestead land. About 3,000 baskets, each stacked with 2,000 leaves, were traded daily in the entire Jaleswar town, recalled Guruprasad. Unsure of prices, agents now hesitate to send even 50 baskets, he added.

“Prices nosedived in the past couple of years. I incurred a loss of Rs 2 lakh in 2008 and have since shifted to a pucca (proper) business. It’s no longer fashionable to chew paan. The young generation likes gutkha and cigarette,” Guruprasad said, artfully tucking a paan in his cheeks. 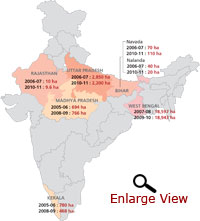 Guruprasad is not the only victim of the shrinking market. In 1990 more than 200 supply agents were operating out of Jaleswar. Only 15 are still in the business. They have mostly confined their business to the processed form of betel leaf, called the Banarasi patta. It commands a high price in the market.

Processing the Banarasi patta is a delicate task. One has to neatly pack the leaves in a cane basket after a generous sprinkling of water and cover them with wet jute bags. The basket is then put in an oven with charcoal burning in one corner. This is called paan bhatti. As heat de-humidifies the leaves after three rounds of heating and cooling, they turn pale yellow and thin. They last longer, for up to a month. The processing also imparts a sweet taste, making it a favourite among connoisseurs. Declining betel demand has also affected the processing units. Barely five of the 100 paan bhattis in the town are operational.

Afsin Ali, 40, is one of those who burnt their fingers in the processing business. In 2007, he invested Rs 5 lakh from his hard-earned savings and borrowed from betel farmers to set up a paan bhatti. He made a profit of Rs 1 lakh in the first year. But the market crashed during the summer of 2009. “Since production goes up during summer, the market usually slumps. But that year it was unpredictably steep,” said Ali. He received only Rs 5,000 for the Rs 40,000 worth of consignment he had sent to paan mandis in Uttar Pradesh. At times the consignment would rot and he would have to shell out Rs 1,000 to dispose it of at a garbage dump. Last year, he gave up the business and started working as an insurance agent.

The horticulture department of Odisha has no records of betel leaf production and trade in the state. However, Balai Mohanty, a betel farmer from Bhograi block in Balasore district, said those who have betel farms are sticking to them as market price is sufficient to meet the running cost. But hardly any farmer in the block has put up a new farm in the past few years, he added. “Betel is not as lucrative as it used to be.”

No buzz in mandis

Take West Bengal that accounts for two-thirds of the betel production in the country. Its Bangla patta is famous for the spicy taste and is in demand from several Asian countries, including Bangladesh. But bookings for Bangla patta have gone down by half in the past 10 years, said Chandi Charan Samanta, secretary of the traders’ association of the auction hub of Mechheda in East Midnapore district. Earlier, traders from Delhi and Mumbai would book consignments every day. But these days they make bookings on alternate days and at times even twice a week, Samanta added.

Rajeev Goel, member of the Delhi paan traders’ association, offered a few figures. Till 1998, the Delhi Paan Bazaar, that supplies betel leaves to the entire city, received 8,000-10,000 Banarasi patta baskets every day, each carrying 1,000 leaves. By 2005, the market received 9,000 baskets only five days a week. The number has decreased further to 8,000 thrice a week since 2008.

Betel trade has fallen by 35 per cent in Uttar Pradesh, reckon traders’ associations in Lucknow. The district has the second-largest betel market in the country after Varanasi. Farmers prefer to grow crops that give assured returns, said Shyam Prasad Chaurasia, owner of the paan mandi in Lucknow. At least 200 farmers who used sell betel leaves at his mandi have shifted to other trades in recent years.

Blame it on gutkha

As per the Economic Survey of India, about Rs 800 crore worth betel leaves were traded in 2000. The trade has dipped by 40-50 per cent since, say traders’ associations of Uttar Pradesh, West Bengal, Odisha and Delhi, though there is no official record. “Data on betel is not collected as it falls in the unorganised sector,” said Jose Samuel, chief consultatnt at National Horticulture Mission, Delhi.

Last decade is also the period when India witnessed a sharp increase in the consumption of chewing tobacco, especially gutkha. According to Euromonitor International, a London-based market research firm, 484,000 tonnes of chewing tobacco was sold in 2004. The sale went up to 639,000 tonnes in 2009. Break down the amount into six grammes, which is the standard weight of a tobacco sachet, and India consumed 80 billion tobacco sachets in 2004 and 120 billion in 2009. According to WHO, 45 per cent adult Indians were hooked to smokeless tobacco consumption in 2009.

Gutkha invaded the Indian market in the 1990s. At roadside kiosks it is as ubiquitous as tea. The success of the Rs 10,000-crore gutkha industry is due to its easy availability, smart packaging, high shelf-life and low prices; the rate of a sachet has been Rs 1 over the past 10 years. Besides, paan is a varying commodity, while gutkha has a uniform taste, said Subhash Gupta. Once a paan seller, Gupta now sells gutkha in Delhi’s Paan Bazaar. As many as 80 paan sellers in the market have shifted to selling gutkha in the past decade.

Retailers say it is easy for a bus driver or labourer to pick up 20 sachets on the go. To pick up 20 quids of paan they would have to wait for at least 10 minutes while the leaves are washed, garnished and rolled. Satish Kumar, who has been running a paan kiosk in Lucknow town for more than 20 years, said 12 years ago he used to sell over 400 betel quids in a day. “These days people hardly ask for betel quids, so I started selling gutkha alongside paan. I sell at least 100 packets of gutkha a day, each containing 60-100 sachets,” Kumar said. “People prefer gutkha because it is cheaper and more fashionable than red-stained lips.” 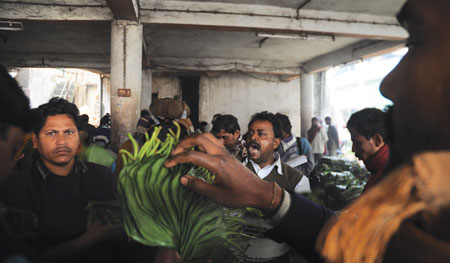