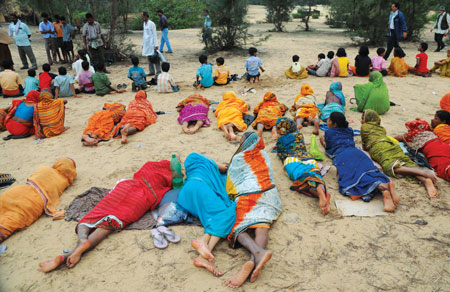 On the morning of June 13, 2011, Sukhdev Sahoo of Nuagaon in Odisha’s Jagatsinghpur district woke up in horror. The state administration had demolished his betel farm. The betel vines were in the way of India’s largest foreign direct investment: the US $12 billion POSCO project. Sahoo was threatened: “If you don’t take the compensation money you will lose everything.”

Scrounging the uprooted vines three days later, the 73-year-old breaks down. “I did not cry so much when my son died. My grandchildren will not have anything for the future.” The Rs 3.22 lakh compensation would barely cover three years of profit from Sahoo’s 28 decimal betel farm (250 decimal makes a hectare).

Only 10 of 1,100 families living in Sahoo’s village, Nuagaon, face direct displacement as a result of the project. But every family in the village stands to lose land, leaving people to survive on a one-time compensation package, which does not guarantee jobs.

A senior POSCO official, who requested anonymity said, “The local people do not have the expertise to work for us. But we can offer some jobs as gardeners or as daily wagers during construction. With a big project in their area, they will have ample scope to run small shops or become drivers.”

Leo Saldanha of the Bengaluru-based Environment Support Group and co-author of a study evaluating the environmental and social impacts of the POSCO project says, “The government never conducted a primary survey to identify households dependent on forest land and the landless agricultural wage earners.” 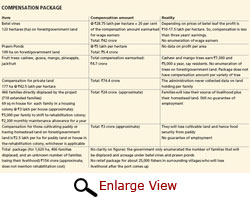 At the Bhubaneswar office of the government agency in charge of land acquisition, Industrial Infrastructural Development Corporation of Odisha (IDCO), Pradipta Mahapatra, the nodal officer for the project, claims the compensation package is the best on offer. His arrogance stems from the fact that Sahoo and other Nuagaon residents are officially encroachers on forest land after environment minister Jairam Ramesh’s final clearance for diversion of forest land for the project. The state government had struck down the residents’ claims of dependence on forest land for generations as “fraudulent”—this when successive committees appointed by the environment minister supported the claims under the Forest Rights Act, 2006. Says Mahapatra: “The people have enjoyed benefits of forest land for too long. They can take the compensation and leave. We will issue job cards for the displaced, but if they are unable to get a job, they will have a year’s maintenance allowance.”

On a cloudy June afternoon, 70-year-old Gurubari Das of Nuagaon salvages wires and poles from his demolished betel vine. He did not join the protests but remains defiant: “POSCO will not happen. They gave me a cheque of Rs 1,20,700. Once the company goes back, I will reconstruct the vine with that money.”

The state administration, however, believes there are no protests in Nuagaon. “All protests are concentrated in just two villages, Dhinkia and Govindpur. Rest of the people are pro-POSCO. The project will displace only 466 families,” reads a state government assessment. Surajit Das, rehabilitation officer for the project says, “The villagers want us to demolish their betel vines but are joining the protests out of fear of the POSCO Pratirodh Sangram Samiti. The Samiti would like us to shoot a few, but we have been cautious.”

Dhinkia is certainly the epicentre of protests, but farmers from Nuagaon claim the agitating leaders from Dhinkia have been stopped from moving to other villages. For fear of arrests, Dhinkia residents do not step outside their village nor do they allow administration entry. The agitators claim the administration has clamped 167 false cases against people of the village. Dhinkia covers 55 per cent of the land required for the project and the stalemate has affected the administration’s survey in the village.

According to a memorandum of understanding (MoU) it signed with the Odisha government in 2005, POSCO requires 1,620 hectares (ha) for its plant-power-port complex. It will also require an additional 2,469 ha for its mining project in Khandadhar hills of Sundergarh district and 809 ha for townships around the project and mine sites. The project will also require land for a dedicated railway track running over 300 km to transport iron ore from the captive mines to the plant site. In addition, land is required for road and water linkages.

The state government has not revealed as to how it will acquire this land. Mahapatra dismisses queries on this count. “Don’t worry about the additional land. IDCO has land near Paradeep for the project,” he says.

Saldanha believes the Odisha government is following a step-by-step strategy. “It arranged land for the plant site by subverting the Forest Rights Act, 2006. Next it would want the mines at Kandadhar for POSCO,” he says.

An October 2010 report by a coalition of US-based researchers, Mining Zone People’s Solidarity Group, belies the Odisha government’s claim that POSCO will displace 466 families, approximately 2,500 people. “The mining project alone will displace 12 villages in Keonjhar and an unestimated number of villages from Sundergarh district. In these two districts inhabited by scheduled castes and tribes heavily dependent on the forests, an estimated 10,000-15,000 people stand to lose their livelihood,” the report notes.

“The forests of Sundergarh are home to Munda, Oraon and primitive tribes like the Paudi-Bhuiyan. The forest rights issue can surpass the Vedanta case in gravity,” thinks Madhumita Ray of Action Aid, who has worked in these areas for more than a decade.

During a visit on June 18 to express solidarity with the protesting villagers, social activist Swami Agnivesh brought to fore a forgotten point. “There is 2,833 ha of fallow land available close by where POSCO can be shifted.” The land falls between the Jatadhari and Devi river mouths and has no claimants, informs Sarada Jena, a Zila Parishad member from Erasama block. But neither POSCO nor the government want to look into the possibility.

Less than a tenth

The rehabilitation package for 1,620 ha is Rs 154 crore (estimated cost as the administration has not revealed the real cost). But POSCO deposited only Rs 11 crore with IDCO. Mahapatra dismisses queries on the shortfall. “Don’t bother about how much POSCO has deposited. That is our headache. The company will deposit money whenever we ask it,” he says. “Remember,” Mahapatra thunders, “we have exercised restraint, but if the local people do not allow POSCO, we will make sure they do not have their betel vines on forest land.”

As this story goes to print, a beseiged state government has suspended land acquisition citing inclement weather. It has also begun work on a boundary wall around the acquired 728 ha.