Panchayat Raj Half a cheer for democracy

Panchayat Raj Half a cheer for democracy 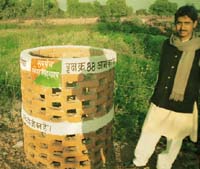 RAMESH Singh Yadav is much sought after. Especially among creditors and moneylenders, to whom he owes a total of about Rs 10 lakh. Head of the Shivpur village panchayat in Madhya Pradesh's Tikamgarh district, Yadav ran the debt for an unusual reason he tried to provide his village the benefits of the National Rural Employment Guarantee Scheme (nregs). Because, Shivpur is battling three consecutive years of drought. Farmers, mostly small and marginal, were desperate for work in the summer of 2006, and the employment guarantee provision was a boon, with its focus on water conservation and 100 days of assured daily-wage work.

A plan worth Rs 20 lakh was prepared to build a check dam, a one-km-long road, and the planting of 300 fruit-bearing trees. The technical estimates made by the junior engineer of block development office, Tikamgarh, were approved by the gram sabha (village assembly).Next, money was sanctioned by a specially appointed block programme officer, who released the initial installment of Rs 10 lakh in May 2006; this was only 50 per cent of the planned amount. Work happened between May and August. Government guidelines require officials to release the remaining amount within a fortnight after verification of the works. When this did not happen, Yadav convinced local traders to supply material like bricks and plant saplings to complete work. He also borrowed from moneylenders to meet capital requirements, promising to pay them back on disbursement of the funds by the block office.

But, a clerical mistake by the block programme officer in not sending the fund utilisation certificate to the district officer delayed disbursement. This certificate depends on a physical verification and clearance by the junior engineer. nregs makes the same engineer responsible for 10 panchayats. By December 2006, when Down To Earth visited the village the junior engineer had still not managed a visit.

Moneylenders come chasing Yadav, who has visited the block office 15 times. "It is 16 km away. Each trip there costs Rs 150, equal to the monthly honourarium I get from the state government," says he.

Shivpur has not taken on any new work under nregs, despite demands from its residents. It has another 10 rural development programmes that require the panchayat's attention, from old-age pensions to children's mid-day meals.

But Yadav is worried about recovering the dues, and has little time to attend to other work. He hasn't called a village assembly for months, fearing public humiliation and removal from office via a no-confidence motion in the panchayat--the state's panchayat law has a provision for recalling the sarpanch.

"For elected representatives, this scheme is too risky. It triggers discontent against us for no faults of ours," says Mint Ram Yadav, sarpanch of the neighbouring Hira Nagar panchayat. He, too, has borrowed money for nregs in his village, and has to chase the junior engineer and block officials for its release.

The Union government has allotted Rs 11,300 crore to nregs in 2006-07, making it the largest central rural development scheme. Under this scheme, panchayats are the nodal implementing agency. While this acknowledges the third tier of government, it adds much to their workload.

For panchayats to assert powers, they need training and capacity building. In the absence of these, critical decisions are made by local government officials, who hijack planning and implementation of village works.

So, even as more works come to panchayats, its members still feel cheated--they have to do much of the administrative work, but do not have any decision-making power.

Neeluri Govindu, sarpanch of Kesapalli gram panchayat, in Anantapura district, Andhra Pradesh abhors nregs. Govindu has no say in its implementation. A technical assistant measures the work done by the labourers and mandal officials make payments. "The 12 ward members in the panchayat do not have any specific power," he says. It lists beneficiaries and makes job cards.


T R Raghunandan, joint secretary to the Union ministry of panchayati raj, points out that panchayat heads are already paying the price of what is beyond their power "The recent panchayat elections in Tamil Nadu and Bihar show that about 80 per cent of the representatives weren't re-elected."

"nregs is the officials' baby. Even at the level of gram sabha, it is officials who control the strings," says Kullaya Swamy of the Centre for Rural Action, an ngo in Anantapur that did a social audit of nregs. A study from across 16 states by the Society for Participatory Research in Asia, a Delhi-based ngo, shows that panchayats turn out to be mere messengers of local officials. For example, in Madhya Pradesh, the tehsildar has the power to arbitrate validity of job applicants in case a complaint is lodged against the panchayat head. In many states, district collectors have been made the district programme coordinators, undermining the panchayats. Central guidelines mandate that an nregs assistant (gram rojgar sewak) should be recruited for each of 87,000 panchayats where the scheme is applicable. But most states have not made such appointments. A recent survey of 13 states by the Union ministry of rural development showed 4 states appointed such assistants to help panchayats. There is provision for a technical assistant for every 10 panchayats.

The uk government's department for international development prepared a report on panchayats in India. It showed they were not prepared to efficiently handle manifold increase in work. It gives the example of Samastipur in Pratapgarh district, Uttar Pradesh. After the gram sabha passed a proposal for desilting a tank, the panchayat was allotted funds. But in the absence of technical staff, the work did not take off for six months. The report says "it is local government officials and contractors who call shots in schemes implementation".


Panchayats to handle greater rural development traffic; there are snarls ahead

THERE are as many as 2,000 rural development programmes of the state and Union governments in India and panchayats play a major role in their delivery. Out of 606 districts in India today, 535 have elected panchayats. There are 233,669 village panchayats in India with 2,608,808 elected representatives. These represent nearly 65 per cent of the country's population, and are more directly involved in its development concerns than the Union or the state governments.

Almost all state governments are cutting down spending on the social sector, given the state of their fiscal mismanagement. The Union government has emerged as the key driver of rural development. It has started insisting on channelising rural development monies through panchayats.Data from the Union ministry of panchayati raj shows that of 214 centrally sponsored schemes (css) targeted at rural communities, panchayats implement 151 and have a partial role in 23 others. This totals to 174 schemes, which received an allocation of Rs 33,044 crore in 2005, to be used by 230,000 panchayats. In addition, the states contributed about Rs 9,000 crore to these schemes. This makes the total budget of css roughly Rs 42,000 crore in the year. In other words, on an average, each panchayat can get roughly Rs 12 lakh per annum on these central schemes. (see box The burden of being panchayats)

Panchayats also implement most of the schemes classified under 'additional central assistance', which are disbursed through specific regional anti-poverty programmes. According to the computation of the Union ministry for panchayati raj, these comprise 16 schemes operated by 11 ministries and departments, worth Rs 16,880 crore in 2005. The combined schemes add up to an estimated Rs 59,000 crore each year, which is handled through this tier of government.

The government is now in the final stages of launching the Rs 3,750 crore Backward Regions Grant Fund. This fund to be spent over five years in 250 of India's poorest districts, will be handled exclusively by panchayats.


Panchayats have huge administrative workload.They have to maintain accounts for as many as 76 schemes on an average, which gives little time for effective on-ground implementation. In a sample study in Madhya Pradesh and Karnataka, the World Bank found

that on an average, a sarpanch needs to keep track of 470 accounts and deal with 17 line departments involving 50 officials (see box Not a good career option, pg 28). Each activity has to be dealt with separately. There is no convergence of schemes at the village level.

"Half the panchayats in Bihar do not have an office or a full-time panchayat secretary. This means panchayats are operating from the jholas (carry bags) of either the secretary or the heads of panchayat," says Pankaj Anand, chief operating officer of the Centre for Communication Resources Development, an ngo in Patna. No wonder most reports indicate that panchayats are performing badly.

In the coming years panchayats will get more work, more money and more responsibilities. The Union ministry of panchayati raj has initiated a process through which all ministries implementing schemes in villages will have to look at their functions relevant to panchayats. "Centrality of panchayat in all government schemes is what we are looking forward to," says Mani Shanker Aiyar, Union minister of panchayati raj. In other words, panchayats, will be key to development in the country. But what is the state of their development?