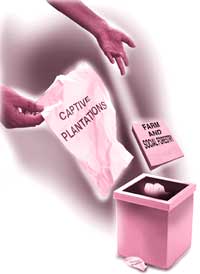 A proposal by itc Ltd to set up a pulp and paper plant has rekindled the debate on allowing the private sector access to the country's degraded forestland.

O ne of India's largest paper producers, itc plans to invest Rs 2,500 crore to set up an elemental chlorine-free plant. Only its location remains to be finalised. This decision is expected in a month or so, once the company sorts out issues relating to availability of water, electricity and, most significantly, sourcing of the raw material: wood. According to Pradip Dhobale, chief executive officer, itc Paperboards and Speciality Papers Division, Hyderabad, the plant will have an annual capacity of 200,000 tonnes, for which it will need wood from about 75,000 hectares (ha) of plantations.

However, an amendment to the Forest Conservation Act (fca), 1980 prohibits degraded forestland from being used for captive plantation by private companies. This was done to ensure continued access to poor communities dependant on minor forest produce, which provides many people their only source of livelihood. Such communities also use the forests to meet their fuelwood needs and for fodder for their livestock (see box:Loss or gain). Besides, captive plantations promote monoculture -- a poor replacement for naturally regenerated forests.

But why is itc pursuing the controversial idea of captive plantations when it has successfully implemented a better option? A similar itc plant in Bhadrachalam in Andhra Pradesh (ap) has been a model in farm and social forestry. The plant has a 300,000 tonne capacity, one third of which uses wood as raw material. The Bhadrachalam plant sources all its wood requirement from farmers -- almost 3,000 in 14 ap districts - who thereby gain between Rs 635-750 crore annually.

Dhobale justifies the company's dramatic turnaround saying, "To compete in the international market, we will have to look at a combination of approaches, including allotment of degraded forestland; we cannot depend solely on farmers as we have in Bhadrachalam."

In fact, the decision on the unit's location has been delayed for months probably on account of an assured supply of wood. A problem companies have with farm forestry is that while a particular company may invest in a farmer's plantation, the latter is free to sell his produce to anyone. For this reason, farm forestry does not constitute a source for reliable supply of raw material for the paper unit.

"No one can invest in such a huge project with uncertainty on the basic issue of raw material supply," says Dhobale. "We are still holding discussions with the governments of Andhra Pradesh, Madhya Pradesh, Gujarat and Maharashtra on details before we fix the location." The states, with an eye on the massive investment and employment the proposed plant would bring, have been vying with each other to provide sops to the company. The major issue will be availability of land for captive plantations. But the 75,000 ha figure quoted by itc appears far in excess of that required (see box: Figure it out).

The paper industry has four options for sourcing raw material: importing pulp; buying wood from trees grown by farmers or the government; and growing its own trees in captive plantations. Importing pulp is by far the most expensive option and so is generally avoided. In the last decade, paper units have come under pressure to buy wood from farmers, widely seen as the most socially acceptable option since it provides livelihood to huge number of farmers, labourers and transporters.

But for the industry, the cheapest option would be to lease forestland (for a pittance) from a willing-to-please state government and grow its own trees instead of negotiating with farmers. The industry has been lobbying for private access to degraded forestland for the purpose for almost three decades now.

The industry's case is strengthened by the government's poor performance in regenerating and maintaining forests. Says Piare Lal, pioneer of the social forestry programme in itc Bhadrachalam, "Nothing has changed in 10 years (since the intense debate in the 1990s against leasing forestland to companies) except that we have lost more top soil and more and more lands are becoming barren." He says the State of Forests Report 2003 (sfr), released recently, shows the extent of degradation in forests. It is time to give the private sector a chance to restore these lands to productivity and generate employment, he feels.

A state showing increasing interest in getting into partnerships with industry to use wastelands and degraded forestland for commercial plantations is ap. Says VR Sowmitrii, member of the Committee of ngos (in ap) in participatory forest management, "In the last 10 years of Joint Forest Management, the government has not been able to show any clear output -- either in terms of big increase in forest cover, or the promised 40 per cent increase in annual income of participating households." He adds: "The government has no faith in the forest department and would rather wash its hands off the responsibility of these forests by making agreements with the private sector." But he feels this will severely hamper food security in areas where shifting cultivation or podu is practised and doubts industrial plantation in degraded forests will bring any of the promised benefits to the local communities -- which is the stated aim of the state government.

Meanwhile, even the Union ministry of environment and forests (moef) has been arguing in industry's favour. In 1994, Union environment and forest minister Kamal Nath stated the need to involve industries in regenerating degraded forestland. A draft scheme prepared by moef had to be given up in the face of strong opposition. But in July 2005, while releasing sfr, the present incumbent A Raja echoed his predecessor, stating the "need to involve private sector participation to increase forest cover" -- this time adding the obligatory "multistakeholder approach". What remains to be seen is how moef plans to do so without going against fca.

"We will take steps to insure that fodder and fuelwood requirements of the people are met. We will also abide by any conditions to protect biodiversity," assures Dhobale. He suggests a regulatory mechanism, even a social audit, be put in place to ensure the company stands by its obligations to the local people dependant on forests.

It might be argued: who better than itc, which has the oldest farm and social forestry programmes in the Indian paper industry, to lead the way? But in giving any such incentive to the industry, one fears the interests of the local communities may be overlooked, as has occurred in the past.