The beautiful Valley of Flowers, known for its flower diversity and fecundity, is caught in a strange controversy over ban on grazing 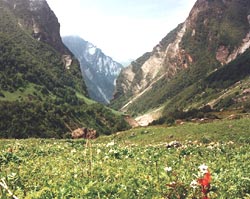 The beautiful Valley of Flowers, known for its almost miraculous flower diversity and fecundity, is caught in a strange controversy. The point of contention: is the conservation attempt proving to be the problem rather than the solution? In 1982, the valley was notified as a national park, and livestock grazing was banned in the area. For the past two decades, though, there have been a number of reports about weeds choking the plant diversity of the region. Scientists at the Forest Research Institute (fri), Dehradun, blame the weed Polygonum polystachyum. Conservationists and forest officials, on the hand, brush off this theory. They claim that the ban on livestock grazing has led to the resurgence of near-extinct plants. The author has spent about a decade attempting to arrive at an understanding of this raging controversy surrounding the Valley of Flowers.

The valley is located above the treeline zone (3,300200 m) in the Chamoli district of Uttaranchal. It takes an arduous 15 km trek from village Govindghat to arrive at the valley. Pulna is the first village on the way up. Another nine km trek, punctuated with waterfalls, wild flowers, forests and beautiful landscapes, takes one past Bhyundar -- a small migratory village surrounded by dense moist temperate forest -- and then a steep ascent to Govind Dham, just three kms from the valley that is known in Indian mythology as the 'garden of Indra'.

The ethereal Valley of Flowers is home to 520 vascular plant species, of which 498 are flowering plants, four are gymnosperms and 18 are ferns. Satellite imagery shows that of the 87.5 sq km area of the park, 63.58 sq km is under perpetual snow and glaciers, 5.29 sq km is under sub-alpine forests and 18.63 sq km is under alpine meadows. The national park, which constitutes only 1.3 per cent of Chamoli district, accounts for almost 25 per cent of its flora.

Besides flowering plants, the alpine meadows also have about 112 valuable medicinal plants. Tourists are known to flock from various corners of the world to see the magic that the valley weaves. As one season melts into another, one set of flowers in bloom is replaced by another. When the greenish-white carpet of fritillaries are in bloom, it seems impossible that anything else could grow where these flowers are so thickly packed together. Yet, as the months wear on, the land is just as packed with white anemones and then bright pink potentillas. Towards September, the creamish Polygonum polystachyum and pinkish Impatiens sulcata take over. To appreciate the true beauty of the valley, one must be conversant with the various cycles of the valley, especially the seasonal cycles: which flower blooms when, and at what altitude a particular flower is found. The arduous trek to the valley is a major deterrent, though.

The weed Polygonum polystachyum, at the centre of the present controversy, belongs to the family Polygonaceae. The people of the Bhyundar valley call it 'saran'. About 70 species of Polygonum have been discovered all over India, of which more than 40 are from the Himalayan region. The authorities have been cutting (mainly in Bamini Dhar and Lower Nagtal) saran during summer in the hope that this will promote dwarf flowering herbs. Interestingly, the Impatiens sulcata has taken over on such sites. Saran proliferates on eroded slopes and areas prone to soil erosion, thus stabilising the slopes, enriching the soil and preventing further soil loss.

Despite several evident benefits, it cannot be denied that in places, saran tends to suppress some flowering herbs and hinders a good view of the flowers. Saran mostly grows at an elevation of 3,300-3,500 m on disturbed habitats such as eroded slopes, boulder areas, avalanche-prone areas and fragmented treeline zones. Flowering plants, on the other hand, dominate stable undulating areas and slopes. Familiarity with the seasonality and habitats of these species clearly show that they do not really cross paths.

If it were true that ban of livestock grazing is responsible for the existing colonies of saran , the central valley would have seen a profusion of saran. The central valley area was blocked off with a rubble wall in 1941 to prevent cattle grazing. The wall was intended to protect a British woman's grave. However, the central valley today harbours the richest flowering plant diversity, and has the lowest saran density. The author has carried out a comparative study of the Great Himalayan National Park of Himachal Pradesh (where livestock grazing is very high) and the Valley of Flowers. The valley, he says, was much richer in floral diversity, possibly due to high habitat diversity and absence of livestock grazing.

Every ecosystem is dynamic by nature. Studies byA Bhattacharya and M S Chauhan of Birbal Sahni Institute of Palaeobotany shows that during 1235-1300 ad, the valley was dominated by Pinus (kail), Quercus (oaks) and Betula (birch) trees. Today, although there are a few patches of birch, there are no traces of kail and oaks. The conclusion that there is a correlation between saran profusion today and stopping of livestock grazing is based on mere speculation. The complete removal of cattle grazing from a heavily grazed region will only cause the natural vegetation to grow in its pristine condition.

Unfortunately, the Polygonum polystachyum controversy is clouding most other conservation issues. An example: The Dactylorhiza hatagirea (hathajari) and the Picrorhiza kurrooa (katuki), both of which are critically endangered medicinal plants, are losing the battle to survive due to the ruthless collection of these plants for commercial purposes. In 1995, the density of Dactylorhiza hatagirea was five to six individuals per sq m. Today, that figure stands at two to three per sq m.

Another matter that ought to catch the attention of conservationists is the 30 km motorable road to Hemkund Saheb via Govind Dham, the foundation for which was laid by the former chief minister of Punjab, Rajender Kaur Bhattal. This road was constructed with generous loans, amounting to Rs 50 crore, from a number of organisations, including the International Khalsa Foundation. Apart from the construction of this road, there are also plans to build parking facilities at Govindghat for 500 vehicles, and a 500 room boarding facility at Govind Dham. All the construction activity, however, was planned without sparing a thought for the fragile ecosystem of the region. Besides affecting the ecological balance, the construction work also poses a serious risk of cultural pollution and serious environmental harm to the valley. Vehicular pollution and heavy tourist influx pose a serious threat to the native flora and fauna, many species of which are already recognised as endangered.

There is another construction activity of considerable import taking place in the Bhyundar valley -- the construction of the Vishnu Prayag Project by Jaya Prakash Co Ltd. This dam, being built at the base of the Bhyundar valley is the first of its kind in Asia, as it is being constructed in an area that remains under snow for almost four months a year. The Bhyundar river catchments were also originally to be included in the project. However, considering the sensitivity of the fragile Bhyundar valley, the government decided to withdraw its plans for the Bhyundar catchment area. While this is undoubtedly an admirable decision, the present dam construction at the base of the mountain, which supports the southwestern part of the Valley of Flowers, has not been assessed for long-term impact on the delicate ecosystem surrounding it.

Another major threat to the valley's existence is the heavy deforestation of the sub-alpine forests of Govind Dham. This has led to soil erosion and landslides. The lack of any waste management programme has caused the situation to worsen, with hundreds of tonnes of waste lying in the backyard of the hotels, restaurants and dhabas that have been constructed all the way to the valley of flowers and Hemkund Saheb. Fortunately, the valley itself has temporarily escaped this onslaught of garbage, thanks to the protection the area receives. Visitors are required to take back the waste they create on their return to Govind Dham.

A S Negi, chief wildlife warden of Uttaranchal, promises measures to protect and spread awareness about the conservation of biodiversity in the valley. However, he has his limitations. When asked why he is setting about eradicating the Polygonum polystachyum if it is not a threat to the valley, he said that he has to maintain a delicate balance between scientists and politicians. Here, one must remember, the all-important balance that needs to be maintained is the delicate ecological balance of the indescribably beautiful Valley of Flowers. It is worrying that the tussle over the valley is losing sight of the fundamentals.