Minute particles have a lethal effect on human health 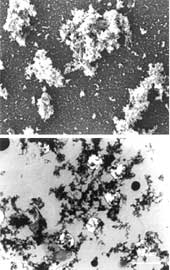 Despite the mounting evidence on the serious health risks from particulate pollution even at relatively low concentrations, the biological mechanism by which it adversely affects humans is not understood properly.

The who estimates that about 500,000 deaths are caused per year throughout the world due to exposure to particulate pollution. Shockingly, 20 per cent of these deaths occur in India, who states that in India alone 100,000 people die due to particulate air pollution -- well above 20 per cent of the total toll (see graph: Inhaling poison ). A 1999 report published in Risk in Perspective , a journal brought out by the Harvard Center for Risk Analysis, states that even in cases where air pollution is not the direct cause of death, it would have contributed significantly to accelerate the process by which people fall ill and die from other causes.

Effect on lungs and the heart: As early as 1935, it was predicted that 68 per cent of inhaled particles that measured 0.03 micron were deposited in the pulmonary passage. The discovery was ignored at that time. Today, internationalstudies have confirmed the link between high levels of particulate air pollution and the decline in lung function or increase in respiratory ailments such as cough, shortness of breath, wheezing and asthma. Research is being conducted toprove beyond doubt the biological process by whichparticulate air pollution affects human health (see box: Pollution and mortality ).

First finding: One recent hypothesis explains that on entering the lungs, particles restrict the availability of oxygen to the lung muscles, causing ischemia, a condition that affects the cardiac rhythm (heartbeat), resulting in heart attack.

Second finding: Yet another hypothesis states that particles cause inflammation of the lungs, which in turn affects the closely linked pulmonary and cardiovascular systems. It goes without saying that if the effects on lungs and the respiratory system are experienced across a population, particulate air pollution can have substantial impacts on life expectancy (see box: The US experience ).

Third finding: Epidemiological studies in the us based on the daily time-series has established the link between specific causes that lead to death with short-term increases in air pollution. These include heart attacks, emphysema (enlargement and partial amalgamation of the air sacs of the lungs, resulting in breathlessness and wheezing) and chronic bronchitis. In these studies, death which is caused by pollution occurs to people with serious pre-existing health problems, especially the elderly.

Even if the air pollution levels do not cause death, those affected can be expected to live anywhere between a few days to a few years. However, the quality of life and health will certainly be less than that experienced by a healthy individual of the same age.

Fourth finding: According to the quarterly newsletter of the Boston-based Health Effects Institute, usa , similar health effects of exposure to particulate matter have been reported in time-series epidemiological studies (daily changes in health outcomes with corresponding alteration in pollution levels) conducted in a variety of locations in which the relative amounts of particular types of particulate matter (like pm 10, pm 2.5 and so on) are different. These results give rise to further questions: what attributes of the particulate matter mixture renders it toxic? What elements in the particulate matter adversely effects the individual?

Fifth finding: The report by Harvard researchers, entitled Valuing the Health Effects of Air Pollution , states that for each premature death due to cardio-vascular causes induced by particulate air pollution, there may be several non-fatal heart attacks. It further explains that although these non-fatal cases do not result in immediate death of the patient, they may cause permanent damage to the patients cardiovascular system and induce loss of life expectancy.

Effects on children: Apart from those suffering from heart-related problems, elderly and children are most susceptible to particulate pollution. A 1997 study in the us on the relationship between selective causes of post-neonatal infant mortality and particulate air pollution found an association between increased infant mortality rates due to particles present in the air.

According to another report published in the us -based journal Environmental Health Perspectives in June 1997, there is 40 per cent greater probability of respiratory problemsand 45 per cent greater probability of death due to respiratory causes among babies who are exposed to pm 10 concentration of about 40.1-68.8 g/cum than those exposed to lowerlevels of 11.9-28 g/cum. The report was based on a studyconducted by epa and National Center for Health Statistics during the period 1989-91. The results of the study hasserious implications for cities like Delhi, where pm 10 levels reach 820 g/cum.

Increased risk of cancer: Particulates are now treated as toxic air contaminants and a safe limit cannot be ascribed to them because the end point of the risk is cancer. The only way one can reduce the risk is by lowering the exposure as much as possible. The cancer-causing potential of particulates has been studied in detail in the case of diesel particles. Scientists have conducted toxicological and epidemiological studies to examine the cancer-causing potential of diesel particles. Based on human epidemiological data, the Scientific Review Panel of the carb points out that a chronic exposure to 1g/cum of diesel exhaust will lead to 300 additional cases of lung cancer per million people .

While countries with comparatively low particulate pollution are concerned, the Indian administration is complacent

While the West is discussing the possibility of monitoring pm1, India is not even geared to monitor pm10, let alone pm2.5. Only in Delhi the Central Pollution Control Board (cpcb) has started monitoring pm10 since March 1998 and that, too, only at one station -- Income Tax Office (ito) crossing. And the pollution levels are frightening. These have remained well above the standard throughout the year. The pm10 levels were even worse than tspm levels. In November 1998, they were more than five times above the standard, and in December, the concentration reached a high of 820 g/cum, more than eight times the standard. The data available for the first three months of 1999 show that the level of PM10 was always above the permissible limit and reached as much as five times above the standard during January and February.

Now, there is medical evidence to establish its immediate effect on public health in the capital. A recent study by J N Pande, professor of medicine at the All India Institute of Medical Sciences (aiims), New Delhi, throws up more evidence to support the link. The study, conducted over two years at the emergency room of the aiims, reveals that Delhi's polluted air is responsible for over 40 per cent of the emergency hospital admissions of patients with respiratory and heart problems.