Once parched, Dewas in Madhya Pradesh is now a lush green district 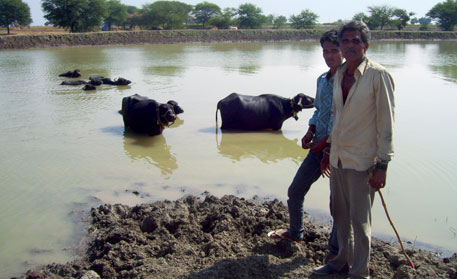 Raghunath Singh Tomar of Harnavda village in Madhya Pradesh’s Dewas district had to single-handedly construct a one-hectare (ha), two-metre deep pond to irrigate his farm. His brother was not ready to help; he thought the irrigation model was a waste of time. In a year the pond irrigated 15 bighas (one bigha equals 0.16 ha), yielding 350 kg of soybean per bigha compared to the average 150 kg yield earlier. This earned Tomar twice as much money as spent on building the pond (Rs 52,000). The feat won over the brother and the village.

Tomar had learnt the benefits of farm ponds years ago at a water management workshop organised by a non-profit in Rajasthan.

This small success story of 2004 had a ripple effect that has transformed the once-parched district in the state’s Malwa region into a lush green area. Since 2005, about 6,000 farm ponds of sizes varying from a quarter to five ha have been dug. They have changed the agricultural landscape of Dewas where water crisis had affected crop cultivation. Water levels, which had dropped to 150 metres below ground, are now up, in some areas at less than 15 metres.

Where did the water go?

Decades ago, say elders, almost every farmer had his own pond. The depletion of water table began when people started ignoring traditional irrigation systems and filled up ponds to reclaim land for farming. Powerful landowners encroached upon public water tanks, and a large portion of tanks fell into a state of disrepair. An epidemic of tubewells fanned the crisis. Some farmers have sunk 50 to 70 tubewells and some have purchased boring rigs to save costs.

Dewas was hit particularly hard as water level plummeted. Out of desperation, farmers started investing in tubewells, wading into deep debts. Single-crop farming became the norm and land prices plummeted. “I myself sunk a tubewell annually for 25 years before deciding on the pond,” recalls Tomar. “Everyone around was doing the same.”

Authorities to the rescue

By 2005, Tomar had dug a pond, with assistance from his family. Similar ponds were mushrooming in other villages of the district too.

Dewas’ collector noticed the water situation and called a meeting of farmers to decide on a farmer-friendly policy. He thought the cause was valid but was in a fix. There was neither a government policy to provide funds for pond-digging nor did any bank provide loan. However, the agriculture department, at the collector’s behest, decided to help farmers who could dig their own ponds. Mohammad Abbas, deputy director of the agriculture department in Dewas, says, “We chalked out a list of 7,000 big landowners who owned tractors necessary for digging operations.” He adds, “Then we started holding awareness and training sessions.” To popularise the idea, the campaign was named Bhagirath Krishak Abhiyan. Farmers who dug ponds were given the honorific title “Bhagirath Krishak” and ponds were called Rewa Sagar ponds. Farmers were given free technical guidance and were advised to set aside 10 per cent of their land for ponds. They were also provided assistance in accessing necessities like tractors at a reasonable cost. “The cost of digging a 0.4 ha pond, three-metre deep, did not exceed Rs 3 lakh, which was the maximum the farmers could afford,” says Abbas.

The efforts bore fruit. Some 600 Rewa Sagar ponds were dug in 2006. In response, the state announced a subsidy of Rs 16,350 per pond. When this paltry sum failed to rouse enthusiasm, a subsidy of Rs 80,000 per pond (any size), and an additional Rs 20,000 for scheduled castes and tribes was announced. 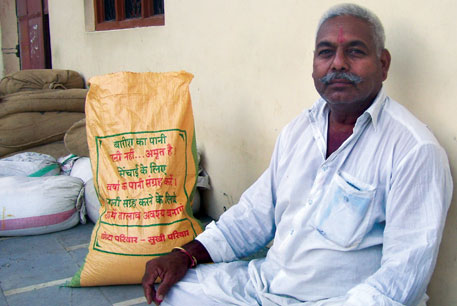 Banks changed their policy after the district administration assured them that every beneficiary farmer will make a fixed deposit in addition to paying back loans. At last there were enough funds, says Abbas. “For small farmers who wanted to dig 0.2 ha or smaller ponds, the subsidy was sufficient, and those opting for bigger ponds could get loans,” he adds. “Till 2006 this area used to look like a wasteland,” says farmer Raghunandan Jalodia, as he squats against the backdrop of lush green chana (chickpea) seedlings. “There was a single kharif crop, either jowar (sorghum), maize or soybean. For the rest of the year, farmers played cards out of boredom,” he adds.

Today, the 300-odd family village of Dhaturia in Tonk Khurd tehsil has 150 ponds, all constructed after 2006. Every farmer in the village has paid back his loan within two years. “The entire landscape has changed,” enthuses Jalodia. “We grow moong (Vigna radiata) and urad (Vigna mungo) along with soy and grains in the first crop. In the second, we grow chana and chandoshi wheat (fine quality, water intensive traditional wheat). We also grow potato, onion and chilli. During summers, we grow vegetables through drip irrigation,” Jalodia adds. “As for cattle, we used to buy fodder earlier, but now we sell it. Only the old folks play cards now,” he adds.

Milk production has also increased with the rise in fodder supply. “The number of dairy cows in our village has risen by 100 heads since we started digging ponds,” says a resident of Bhairwankhedi. This village of 70 families has few and small land-holdings, where the main source of livelihood is milk. The village has 18 ponds, and 10 more farmers are in queue for subsidy. What’s more, the ponds have become a haven for buffaloes, the most popular dairy cattle in Dewas. They provide the cattle a good wallowing place. “Most of the buffaloes are yielding half to one litre of extra milk daily,” says a farmer in Bhairwankhedi.

With assured water supply, many farmers are opting for orchard crops. In Chidavad village, which has 500 houses, 70 ponds have been dug. Several farmers have planted orchards of oranges, sapodilla (chikoo) and drumsticks.

“The best thing about a pond is that one does not have to own it, or the land where it is dug, to benefit from it,” says Jalodia. The ponds have recharged the tubewells of small and marginal farmers who do not have sufficient land. A case in point is that of Subhash Mandloi of Bhairwankhedi, who owns 15 bighas in three separate holdings. “My holdings are too small to support a pond, but two of my three tubewells have been recharged by neighbouring ponds,” he says. He now cultivates two crops on 11 bighas and owns five buffaloes as against just one earlier.

The landless have also benefitted. Elderly Dalawar Singh of Tonk Khurd, who depends on buffaloes for a living, says, “No one minds our buffaloes wallowing in the ponds or grazing along them.” Before ponds, he had four buffaloes, now he owns seven. For years, Dhaturia village lived in fear of Kanjar tribals settled nearby, who indulged in petty crime. But after the ponds were dug, things have changed. “About 75 per cent of the community has given up crime,” says Krishna Singh Hada, a Kanjar. “Two persons, including myself, have dug ponds. Tubewells of the rest have been recharged due to 150 ponds in the village.”