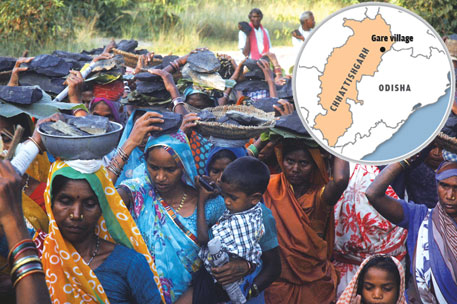 RESIDENTS OF coal-rich Gare village in Chhattisgarh’s Raigarh district have found a unique way to assert their rights over the natural resources found on their land—they have floated a company to mine coal and generate power. Inspired by Mahatma Gandhi’s principles of self-sufficiency and non-violence, the residents started Gare Urja Private Limited in June 2013. Registered in Gwalior, Madhya Pradesh, the company today has more than 250 farmers from 10 villages as shareholders. The farmers own 450 hectares that fall in the coal block, Gare IV/6, which holds high-quality coal.

The idea of floating a cooperative mining company was born in 2006, when the Centre allocated the block to Jindal Steel Works (JSW) despite opposition from the residents. And this was not a one-off instance in the coal-rich Tamnar taluka. “In the past few years, the Centre has allocated land in Gare and its adjoining villages to coal mining, power and steel companies, such as Jindal, Jaiswal Neco and Monnet-Ispat, against people’s consent,” alleges Harihar Patel, former sarpanch of Gare.

Interestingly, Gare IV/6 is one of the 218 coal blocks whose mining leases were cancelled by the Supreme Court in August this year because of their arbitrary allocation (see ‘Coal quandary’, Down To Earth, September 16-30, 2014). Residents say the Centre’s decision to allocate the coal block to a private firm without their consent is also illegal as per the Supreme Court judgement on July 23, 2013, which states that the owner of land has absolute rights over the minerals under or over it. The 2013 Supreme Court order was passed on a petition filed by a group of Kerala farm owners who challanged a Kerala High Court verdict which said the state had rights over natural resources in private land. “After forming the company, we are now ready to bid for coal blocks underneath our own land once the Centre opens an allocation bid,” says Patel, one of the 10 directors of Gare Urja.

Though the Gare residents are yet to earn from the natural resource underneath their land, they have begun asserting their rights over it. Since 2013, they have been celebrating birth anniversary of Gandhi by staging coal satyagraha. This year, over 700 residents, including 500 women, met at the village temple in the morning and marched to the bank of the Keloriver, a tributary of the Mahanadi. After a community feast, the group collected coal from an exposed seam and marched on to submit the pieces at the agricultural market cooperative office in Gare in the presence of government officials.

“It was a protest against companies that forcefully wanted to acquire people’s land to mine coal,” says Patel, also a member of Jan Chetna Manch, a non-profit working for the rights of people affected by mining.

Rajesh Tripathi, land rights activist with Jan Chetna Manch, says the satyagraha is a departure from the previous protest in 2008 that had turned violent. On January 5, 2008, JSW had called for a public hearing, a requirement to get environmental clearance. But residents staged protests at the hearing. In response, the police lathi-charged the crowd, leaving 122 people wounded and 22 critically injured, says Tripathi.

A hectare of agricultural land in and around Gare holds coal reserves worth Rs 55 crore, says Mishra. But JSW was offering only Rs 10 lakh per hectare to the land owners. “This is when our calculation shows that after paying royalty and other taxes, a farmer can earn up to Rs 11,000 per 2.5 tonnes of coal mined from his land. This translates into an income of about Rs 3 lakh per month. So why do we need a company to come and mine here?” he asks.

Between 2012 and 2013, Delhi-based non-profit Mines, Mineral and People organised a series of workshops in Gare, sensitising the residents about their land rights, cost of coal and power.

The cooperative mining business model, Mishra and Patel agree, is far more sustainable and can take care of local energy needs. Mishra points out that a community mining company similar to that of Gare is already successfully operating in Jharkhand’s Dumka town. A three kilo-Watt power plant is operating with coal mined by villagers. It generates enough electricity to light up houses and run fans in the surrounding villages, says Mishra.

“Electricity plants in our vicinity have failed to stop power cuts. In summers, when cities need more electricity during peak hours, the coal mined from our villages can fulfill their need,” says Patel. Unlike big coal mining companies, Gare Urja would also ensure that once the coal is mined, the abandoned mine is backfilled.

“I want my children to study well. With a compensation of Rs 10 lakh we would have had nothing. But with this new model, I can afford good education for my children and have enough to lead a comfortable life,” says Manjula Oraon, whose two hectares are located on the Gare Palma IV/6 coal block.

Gare Urja will soon carry out its first audit. Directors have shelled out Rs 10,000 each to form a corpus, while their accountant recently informed that a Permanent Account Number for the company has been allotted by the Income Tax department. “We have collected about Rs 10,000 each from 10 directors as a corpus to start the company, while land would be used as collateral to raise money to start mining,” says Patel.

He says Gare offers a sustainable mining model and that the government should support the residents to strengthen their novel initiative.