Proposed seaport in Vizhinjam can spell disaster for fishers, tourism and biodiversity in Kerala 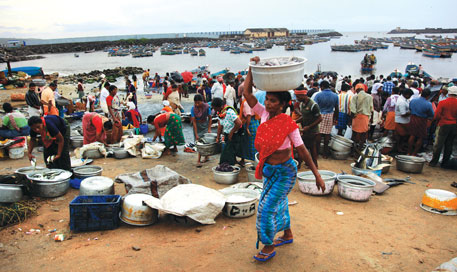 Despite warnings, the Kerala government has decided to go ahead with the construction of Vizhinjam seaport which, according to marine experts, would be an ecological disaster. The international container transshipment terminal, highlighted as a dream project that would bring huge investments, would not contribute to economic development of the state either, say finance experts.

The Rs 6,595 crore project was showcased in Emerging Kerala, a global investor’s meet held recently in Kochi. The terminal would act as a cargo switching point for deep-sea vessels operating on trans-continental trade routes. The state will soon call international tenders for engineering, procurement and construction contract worth Rs 1,600 crore. The project is being implemented by the Vizhinjam International Seaport Limited (VISL), a special purpose company formed by the state government. In 2009, the government had chosen International Finance Corporation (IFC) of the World Bank Group as lead transaction adviser to assist in structuring and implementing the project.

“The Kerala government is committed to clear all hurdles and realise this project fast,” says K Babu, the state ports minister. An environmental and social impact assessment (ESIA) study has just been completed by the Asian Consulting Engineers Private Limited, an accredited agency hired by VISL, and a public hearing would be called soon, says the minister. Civil works will begin once the government gets clearance from the Union Ministry of Environment and Forests (MoEF).

The site is 18 km from the Malacca strait, which is one of the busiest international shipping channels, and the sea water along the southern coast of Kerala near Vizhinjam has a natural depth of up to 22 meters. These two factors will enable the port attract big container ships, says A S Suresh Babu, chief executive officer of VISL. “At present, almost 40 per cent of India’s transshipment is done at the Colombo port in Sri Lanka. If the Vizhinjam port is built, it can contribute significantly to the container transshipment business of the country,” he says. Since the seabed is rocky, the port does not need maintenance dredging either, he adds. 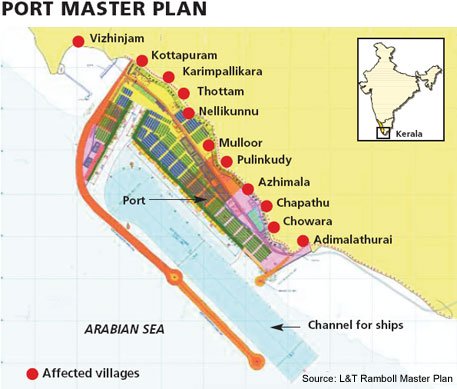 Nearly 80 hectares (ha) of the sea would have to be reclaimed and about 85 ha of land would be purchased for the project. VISL has already spent Rs 260 crore on purchasing some of the land from private parties and has completed the last stretch of a road leading to the port site, even though a clearance for the project from MoEF is awaited. The company even called tenders last year for a private operator and a consortium led by Welspun Infratech Limited (India) qualified. But the firm demanded Rs 470 crore for operating the port for 15 years and the negotiations failed. “After completing the construction we will again call tenders to finalise the private operator,” says the ports minister.

The proposed port site is just 250 metres south of the ever-busy Vizhinjam fishing harbour. This would spell doom for the booming fishing industry and the marine biodiversity of the region. Over 20,000 fisher families live in 11 villages close to the site. Fishers say they will lose their means of livelihood if the government goes ahead with the ambitious project. Marine experts warn the port would damage the ecologically fragile coastal belt of southern Kerala, hurt the marine fauna and flora, change the shoreline and erode the popular Kovalam beach north of the project site.

Just like Vizhinjam, Adimalathurai, a village south of the port site, too, is an important fish landing centre. “If the port is built here, the area will come under the port authorities and fishers will be denied access to the sea,” says T Peter, the state president of Kerala Swathanthra Matsya Thozhilali Federation, an independent federation of fishers.

Marine scientists say that underwater rock dredging, rock removal, reclamation of sea, sand mining, construction of breakwater and quay walls for the port and the resulting pollution will cause substantial damage to the coastline and the fisheries resources. “The affected coastline will most likely extend to 10 km north and south of the proposed port,” says Sanjeev Ghosh, former additional director of the department of fisheries of the Kerala government. He points out that the Wadge Bank, the main fishing ground in southern India, is just 50 km off the Vizhinjam coast. “It is a breeding ground for over 200 varieties of fish and is the largest coral reef of the Indian Ocean,” he says.

The Wadge Bank is home to more than 60 species of ornamental fish and other oceanic animals. Commercially important fish such as squids, cuttle fish, carangids, tuna, anchovies and lobsters are abundant there. Ghosh wrote a letter to MoEF on July 10, 2012, pointing out the ecological importance of the area. “Wadge bank is currently being considered to be classified as a Marine Protected Area. The government should take the opinion of marine experts before going ahead with the project,” he wrote.

When questioned about the possible damage to biodiversity, Ajith S, executive engineer and head of the environment division in VISL, says, “I don’t want to make half-baked comments. Let the ESIA report be published. Those who have objections can raise them in the public hearing. There are vested interests behind the allegations,” he says.

There are 31 beach resorts on the Vizhinjam coast. They cater mainly to foreign tourists who come here for ayurveda treatment and employ nearly 3,000 people. The resorts will go out of business once the port is built. The owners of these resorts point out the proposed port would offer only 500 jobs.

The dynamics of sea currents along the southern Kerala coast is such that any construction into the sea would erode the coast to the north of the construction and cause the sand to collect on the stretch towards the south, says Ghosh. “This trend has been noticed wherever breakwaters have been constructed,” he says. This means the Kovalam beach, just 1.5 km north of the proposed port, would get eroded. Kovalam is one of the most sought-after international tourist destinations in Kerala. 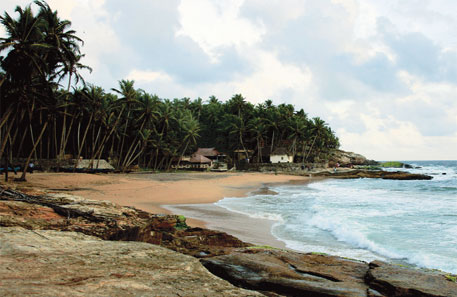 Kerala Hotels and Restaurant Association has protested the project. Of the Rs 18,000 crore generated a year by the state’s tourism sector, over 30 per cent come from the Kovalam-Vizhinjam-Poovar belt, say the owners of the resorts on the Vizhinjam coast. At least Rs 20,000 crore has been spent for developing the tourism infrastructure in this belt and all of that will go waste if the resorts are shut due to the port development, says M R Narayanan, secretary general of the South Kerala Hoteliers’ Forum.

The hoteliers also allege that VISL has falsified the facts to get clearance for the project from MoEF. The firm had hired L&T Ramboll, a leading consultancy firm in the country, for a site selection study in 2004. “The study says there are only three resorts in the project area,” says Cyriac Kodath of Coconut Bay, a resort that falls within the project area. VISL seeks ESIA approval in the public hearing based on this study. The study does not say a thing about the possible environmental damage, biodiversity destruction and the peculiar erosion pattern in the southern coast, allege the hoteliers.

A debt trap for Kerala?

The proposed port is a public-private-partnership. The state will take up the civil work—sea reclamation, dredging, rock removal construction of breakwater and quay wall, land acquisition, road and rail connectivity and ensure water and power supply. The private party will just bear the expenses for superstructure of the port which includes cranes and equipment. Of the total revenue generated, the private party will collect cargo charges and the state will get vessel charges. Projections based on market studies show that the private player will make an estimated Rs 21,346 crore over 30 years that it would operate the port, leaving the state with a paltry Rs 2,181 crore.

It submitted a report, “Vizhinjam : Strategic Options”, to the state government in 2010 that warns the project could push Kerala into a debt trap, considering the huge cost involved and the low returns for the state. The report says that being new in the business, the port would attract ships only if it gives at least 40 per cent concession over the charges in the Colombo port in Sri Lanka.

Interestingly, all the local political parties and people’s groups like Janapaksham strongly support the project. They insist the project would pave way for regional development. But the IFC report clearly says Vizhinjam will have stiff competition from Dubai, Singapore and Colombo ports. It also says that since the focus is on transshipment, the project will not contribute much to regional economic development.