Perjury and other afflictions

While the market for herbal preparations is maturing, laws and regulations have failed to keep pace with it

Perjury and other afflictions 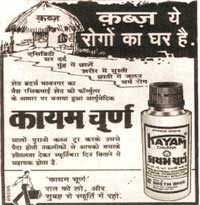 plants are used in both traditional and allopathic drugs. Around 600 million people in the country depend on Indian systems of medicine -- Ayurveda, Siddha and Unani. Export of crude herbs has also grown. A 1997 World Bank report says that revenue earned by India from export of crude herbal drugs in 1994-95 was us $53.2 million (approximately Rs 197 crore). While no precise figure is available, the size of the domestic market is nearly ten times the export market. According to one estimate, about Rs 900 crore worth of herbal medicines are produced annually in India. This excludes illegal trade and sales by unregistered firms.

While the average success rate for enterprises in other sectors is rarely above 10 per cent, this sector of the industry has faired better. Both small and big fish thrive. According to the office of the Drug Controller-General of India, there were 7,843 licensed pharmacies manufacturing drugs used in the Indian systems of medicine (ism). Currently, over 7,000 licensed manufacturers supply 55,000 pharmacies and 14,000 herbal dispensaries with plant-based products. There are also some unlicensed enterprises producing these medicines.

In this market, small companies may be doing as they will, but the big ones are raking in profit by the millions. These large manufacturers -- which almost constitute an oligopoly -- claim to have perfected the quality of their products, which sell well. Until a new brand arrives, that is. Even so, none of these products meets the standards laid down in the ancient texts. Unfortunately, only a handful of people know about the originally prescribed ingredients and there is no system to check up on standards. The law, too (the Drugs and Cosmetics Act, in this case), is silent on many points.

"One does not get the ideal combination of ayurvedic ingredients in commercial preparations. These 'herbal products' contain 90 per cent chemicals and only 10 per cent herbal material," contends Vaidya Balendu Prakash, director of the Vaidya Chandra Prakash Cancer Research Foundation, and chairperson of the Ayurveda, Siddha and Unani Drugs Technical Advisory Board (asudtab). He alleges that mass manufacturers resort to this tactic to make easy money.

Traditional practitioners agree that most medicines of herbal origin available in the market are spurious and adulterated, and violate the standards of the Drugs and Cosmetics Act (dca). "These preparations are quasi-ayurvedic and quasi-allopathic", says Hakim M A Lari, in-charge of the Unani section and head of the department of tashreeh (anatomy) at the Ayurvedic and Unani Tibbia College, New Delhi.

Preparations that are toxic are being openly sold in the market (see box: Lead in the medicine). Exaggerated claims about the effectiveness of herbal medicines through advertisements have become quite common. To check violation of standards, asudtab recently approved guidelines for punitive action against manufacturers and advertisers of these medicines under the Drugs and Remedies (objectionable advertisement) Act, 1954. There are 51 diseases for which advertisement of treatment is prohibited under Schedule J of the dca . These include aids , cancer, encephalitis, leukaemia, blindness, bronchial asthma, diabetes, change in sex of the foetus through drugs, disease and disorders of the uterus, baldness, obesity and paralysis. Violation of the prohibition is punishable by imprisonment or fines, or both.

Some drug manufacturers have represented to the department of Indian systems of medicine and health, as well as to the Drug Controller-General of India, asking for change in the rules governing use of certain chemicals mentioned in the section on patent and proprietary (p&p) medicine of the dca. State authorities have been issuing licences for manufacture of p&p medicine, but these often contain chemicals that are not included as ingredients of ayurvedic medicine in Schedule I of the dca.

"A number of herbal cosmetics available in the market are labelled 'ayurvedic drugs', even though they contain preservatives, additives and foaming agents, which should not be present. This way, manufacturers evade the higher excise duty applicable to chemical cosmetics," says Balendu Prakash. The duties payable for the p&p items and cosmetics are 8 per cent and 40 per cent, respectively. A case in point is Shahnaz Husain's upmarket 'herbal products' (see box: In the dock ) which had been doing well at home and abroad.

But even regularly sold downmarket products are below standard. "Take any brand of chyavanprash available in the market," says Ranjit Roy Chaudhary, chairperson of the scientific advisory committee on traditional medicine, Indian Council of Medical Research (icmr). "You will not find the date of expiry of the product." (see box: Chewing trash ) "There is no control over manufacture of these products in India. On the other hand, traders are exporting herbs used in these preparations, which are standardised in other countries," he adds.

It is not that ayurvedic products last forever. Like all organic things, they decay. Moreover, the potency of the organic chemicals in the herbs decreases over time. Unlike allopathic drugs, these preparations depend on low to moderate levels of chemicals. For this, it is necessary to determine even the season or month for collection of the herbs used, according to ancient ayurvedic texts. So the practitioners of the ancient system were fully aware of the limitations of time on potency and efficacy of a medicament.

A second and related problem is that no tests are carried out for toxicity of the drugs. Allopathic drugs are subjected to a battery of tests. Tests for harmful effects are carried out on at least two mammals, including their foetuses. If a drug passes these tests, it goes for a three-stage clinical trial and field trials. Some 15-20 volunteers, whose blood pressure, rate of perspiration and breathing is monitored, are administered the drug in the first phase. If it passes this test and no side-effects are noted, the drug is tested on 50-100 patients under close observation. In the third phase, it is given to 250-300 patients at three or four centres to test its efficacy. The drug is then ready for marketing. After this, however, a fourth and final test is conducted on over 2,000 patients -- a field trial.

But clinical and field trials are rarely undertaken for ayurvedic and unani medicines. Consequently, manufacturers can make claims which would be hard to substantiate. "Companies are simply collecting plants, making a preparation and marketing it -- without data to substantiate claims about their effectiveness or knowledge about its side-effects," points out Roy Chaudhary. "Sometimes ingredients are substituted, accidentally or by design, with dangerous consequences for the consumer.