One of the first species domesticated by man, the pigeon is now an invasive species and a pest in many parts of the world 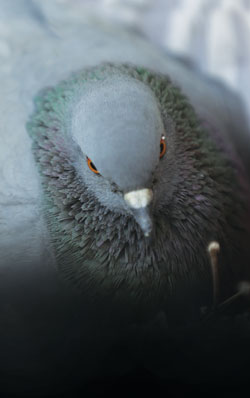 THEY ARE not the cleanest neighbour unless you prefer a house that looks like someone is throwing raw eggs at it on a regular basis. Almost every day, we have to scrub away crusty pigeon poop,” lamented Durban resident, Walter. He believes the South African city has been overrun by pigeons. “They get easy access in open plumbing ducts and find good nesting area on pipes and parapets inside the duct. They make nests and lay eggs there. The ducts are full of bird droppings,” says his neighbour, Chandran.

Durban is not the only South African city with a pigeon problem. A document of the country’s urban affairs ministry notes, “The appearance of many of our finest buildings is marred by the birds. They render foodstuffs inedible; introduce insects, mites and diseases harmful to man and cause breaches of the Public Health Act. Pigeon droppings damage masonry, block drains and cause structural damage.” The pigeons in question are feral. In August 2014, the country’s Department of Environmental Affairs listed the feral pigeon as an invasive species. “Activities including importing, breeding, trading and translocation of pigeons are now listed as prohibited,” according to a press release of the department.

Daniel Haag Wackernagel, a biologist based in Basel, Switzerland, who has studied pigeons for more than 20 years, says that several other countries, including the US, have declared the feral pigeon as a pest and their menace has earned them the derisive moniker, “flying rats”, in many parts of the world. “Feral pigeons are free-roaming descendants of once-domesticated birds. The pigeon was one of the first bird species domesticated by man, more than 5,000 years ago. Millions were raised in ancient and medieval Asia and Europe. They arrived in Africa and the Americas with the Europeans in the 17th century. Another batch appeared in Africa with the Asians two centuries later,” the biologist explains.

Wackernagel ascribes the menace from the birds to several factors. “The ideal habitat and nesting sites for pigeons are sea-cliffs, preferably those affording caves and crevices. But the pigeon is a highly adaptable bird. High buildings that border streets form gorges resembling rocky cliffs, their original habitat. Pigeons, thus, adapt easily to the structure of our towns. Vast food sources are available nearby through accumulation of rubbish, accidental spillage and deliberate feeding by people,” he explains.

Wackernagel adds that in most parts of Europe, Asia, North America and Africa there is one pigeon for every 20 human beings. “The explosion of the pigeon population in many parts of the world is, in some measure, due to the large food supply. After World War II, food became cheap in relation to income. This was initially so in parts of Europe and America, where society produced abundant pigeon food through wasteful practices. Pigeons living in urban areas have expanded their originally granivorous diet to eat all kinds of filth, to the extent that town pigeons are now omnivorous,” says the biologist. Besides, in most parts of the world, feeding pigeons is regarded as a wonderful experience. “Feeding animals is probably an innate human instinct. Children in particular enjoy feeding pigeons,” he adds.

Chandran agrees, reminiscing days when he would huddle with his grandparents feeding grains to pigeons. Wackernagel says this is not necessarily a healthy practice (see “The Basel experience”). “Pigeons are extremely fast learners and immediately get used to a reliable food source. Knowing quickly the habits of their fanciers, the birds arrive in good time for a rendezvous with the food provider. Pigeons can eat their daily food requirements of 20-50 gram within a few minutes. And as they are fed, they no longer have to look for food by foraging for hours and can spend their gained ‘spare time’ in breeding instead,” he explains.

Curt Vogel, a German biologist who has studied the feeding habits of pigeons, says, “Pigeon milk is produced under the influence of the hormone prolactin, by cells in the wall of the crop of both parents. It is extremely nourishing since it consists mainly of proteins and fats, together with water.” This concentrated, rich nutrient enables nestlings to double their weight within 34 hours after hatching. That is why pigeons are one of the fastest-growing vertebrates. Crop milk makes the parent pigeons independent of special foods during the breeding season, while an insect-eating bird like the great tit, and even seed-eating birds like finches, have to search diligently for adequate nutritious food—small insects—to offer to their nestlings. “So parent pigeons can simply enjoy chocolate, sausage or whatever they find to eat and transform it into ‘all-round baby milk,’” Vogel adds.

Pigeons also transmit diseases and parasites that can attack man, says Wackernagel. “They pass infections like ornithosis, cryptococcosis and toxoplasmosis to people. Soft ticks like Argasreflexus, fleas and red mites that disperse from pigeon-breeding places can attack people,” he adds.

The expansion of the bird population, besides being inimical to humans, is not good for the pigeons themselves. “As the density of nesting and roosting pigeons increases, the quality of life of a population deteriorates, just as in human populations,” says Wackernagel. Excessive population density exposes the bird to diseases and attacks from parasites. Crowded breeding places make pigeons behave more aggressively, which mostly affects nestlings and juveniles that are the weakest members of the population. “Pigeons would probably never behave this way in their natural environments. Territorial behaviour as well as other regulatory mechanisms, including predation by birds of prey, would keep pigeon population at levels where they lead less stressful lives,” he adds.