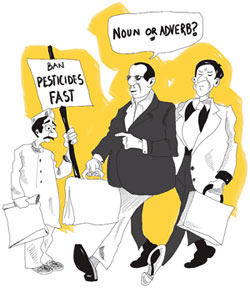 In May when Kerala banned seven highly toxic insecticides so that it switches to safer chemicals, it did not fare better. It ended up replacing them with six others, banned or severely restricted in most parts of the world.

For instance, it replaced carbofuran, a pesticide that affects the nervous system and is highly toxic to birds and bees, with quinalphos and carbosulfan, which impact the nervous and endocrine systems (see ‘Kerala’s faulty choice’).

Currently 67 such pesticides, banned or restricted abroad, including in the EU and the US, are in use in India. But this information is not there in the public domain. The government's response to RTI (right to information) applications filed by the Centre for Science and Environment (CSE), a Delhi non-profit, reveals names of the pesticides. Most of them are used extensively in the country.

The list includes insecticides, herbicides, fungicides and plant growth regulators that are known to damage the nervous system, induce genetic disorders, wreck the reproductive system, can cause cancer and are toxic to bees and aquatic animals (see ‘Controversial 67’).

Consider chlorpyriphos. This pesticide is banned for domestic purposes in the US, but is allowed in India for getting rid of termites and borers. Because of its unrestricted use traces of chlorpyriphos are found in fruits, vegetables and food grains beyond the maximum residue limits (MRL) permissible in food items, shows the pesticide monitoring report of the All India Network Project on Pesticide Residues for 2009-10. Chlorpyriphos is known to affect nervous system and is a suspected hormone system disruptor.

Endosulfan, another controversial agrochemical that induces genetic disorder and was voted to be banned globally at the Stockholm Convention in April, was a widely used pesticide in the country until May when the Supreme Court ordered a temporary ban.

Answering a question in the Rajya Sabha in March, Union agriculture minister Sharad Pawar admitted that the government was aware that pesticides banned in other countries were being used indiscriminately in India. However, he justified their use saying the government appoints expert groups from time to time to review the pesticides that are reported to cause any adverse effect or are banned or severely restricted in other countries. Action is taken on the basis of these recommendations, Pawar had said.

No doubt, the agriculture ministry has formed several expert committees over the years to review these controversial pesticides. But they have failed to yield any results. Barring a few like DDT, methyl parathion and monocrotophos that are allowed for restricted use, others have been permitted to continue.

In 1995, an expert committee headed by agriculture scientist K V Raman recommended that alachlor (herbicide) and phosphomidon (insecticide) be banned. But they are yet to make it to the list of banned pesticides put on the website of the Central Insecticides Board and Registration Committee. 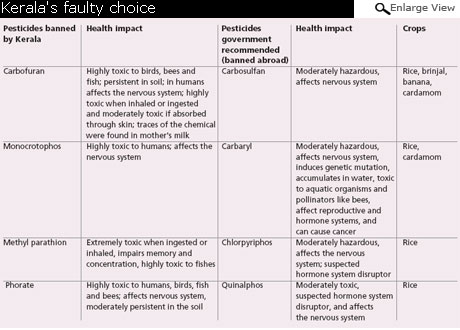 This apart, there are pesticides for which no MRLs have been set. A response of the agriculture ministry to an RTI application filed by CSE shows of the 229 pesticides registered for use in the country, 39 do not have MRLs. Included in the list are metaldehyde, thiram and dezomet, which are banned in other countries.

R Sridhar of Thanal, a non-profit working in Kerala on the impact of pesticides, calls this a scandal.

Hinting at the proximity between the agriculture ministry and pesticide manufacturers, he points out that in 2002, some 32 pesticides banned abroad were used in India. The number has more than doubled since. “While countries across the world have replaced them with lesser impacting or safer molecules, why does India use them,” Sridhar asks.

Agriculture scientists are usually tight-lipped on the issue. “Banning or restricting use of a pesticide is done on the basis of local agro-climatic, environmental conditions and safety standards,” says a senior official with the agriculture department requesting not to be named.

But studies have proved to the contrary. A study by the Kerala State Council for Science, Technology and Environment (KSCSTC) in Kasaragod district of Kerala found traces of endosulfan in the soil and sediments 10 years after spraying of the pesticide was banned in the state. This bioaccumulation of the pesticide indicates that endosulfan was not suitable for Kerala’s climatic condition, but was sprayed continually for 20 years. “This study shows the argument given by the agriculture scientists and our ministers for all these years are clearly not valid,” adds Sridhar.

“The ban in foreign countries is on the basis of scientific studies. We look up to them for almost everything.

Why not in this case?” asks P Karunakaran, member of parliament from Kasaragod. Kerala pioneered in banning endosulfan. Now it should ask the Centre to ban the other 66 pesticides, he adds.