Pet in the zoo

Pet in the zoo 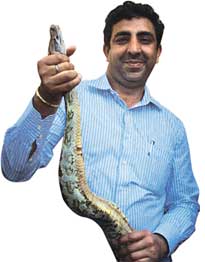 "She is glossy, dark brown and four-metre-long," said a grinning Abhinita Das, law student from Indore. Abhinita adopted her on January 2 to celebrate New Year. But Abhinita's new pet cannot live with her. It is an Indian Rock Python.

What prompted Abhinita to adopt a snake and not a cuddly Labrador or a Persian cat? "I visit Van Vihar National Park in Bhopal frequently. When the park authorities came up with adoption scheme for wild animals, I volunteered," she said. The rock python appealed to her the most and she could afford its upkeep. She paid Rs 720--monthly zoo expenses on a python--from her first internship's salary. Seeing her name on a plaque at the python enclosure makes Abhinita feel good.

The Van Vihar National Park in Bhopal launched its animal adoption scheme on January 1 to spread awareness about wildlife conservation."The idea came from human adoption," said Surendra Singh Rajput, director of the national park. "Like humans, animals need care and the idea is to involve people in wildlife conservation," Rajput said adding that developing a bond with zoo animals will help the cause.

The zoo sprawls over 445 hectares and is located in the heart of Bhopal. It has the multiple status of being a large zoo, a rescue centre for wildlife and a tiger and vulture breeding centre. It has a wide range of animals-- lions, tigers, leopards, bears, hyenas, jackals, crocodiles, alligators, pythons and 207 bird species. Under the adoption scheme, park authorities invited visitors to adopt an animal of their choice by remitting a reasonable fee needed to meet its expenses in the zoo. This covered food and medical bills and upkeep of the animal's surroundings.


The fees have been kept low to avoid the mistakes of an earlier initiative. Karnataka's Mysore Zoo pioneered a similar scheme in 2006 where the minimum adoption period was one year. This did not work. People had to cough up large amount to show that they cared. "We have not launched the scheme to generate funds. The park has sufficient funds," said Rajput. Before launching its adoption scheme, Van Vihar officials carried out a survey. "Most tourists appreciated the idea," said Rajput. The authorities tweaked the Mysore Zoo scheme a little to widen its appeal among animal enthusiasts. The upkeep of large animals cost more. So small animals were also included and the minimum duration of adoption was kept to one month. This worked.

Abhinita came forward just a day after the announcement.

The plaque bearing Abhinita's name has another--Rakesh Kumar Guglani. The chartered accountant from Panipat, Haryana, was not aware of the scheme when he visited Bhopal in early January to participate in a cricket match. After the match got cancelled, he visited Van Vihar and saw Abhinita's name displayed. "I was curious. A park attendant told me about the scheme and I immediately decided to contribute," said Guglani. He paid Rs 1,800, the quarterly adoption fee for the python. 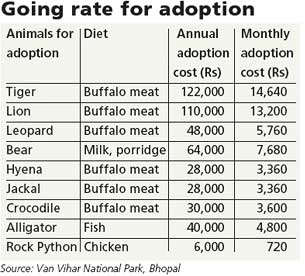 Many people have volunteered since the zoo started the initiative. On January 23, Gulrez Ahmed, 28, an entrepreneur, sponsored a tigress, named Era. He paid Rs 36,000 for adopting Era for three months. "I have visited Kanha and Satpura national parks in Madhya Pradesh, but I didn't see a tiger," said Ahmed. "Adopting Era was my bit to save the wild cat." A week later, M K Gupta, professor at Benazir College, Bhopal, adopted a panther named Trega. He adopted Trega for a month by sending a draft for Rs 5,760.

Park authorities said the money collected through the adoption scheme is used for the particular animal and the donor is regularly informed about the animal's status. They also offer some perks apart from putting up a plaque with the sponsor's name, the donation amount is exempted from income tax. The sponsor is given a certificate of adoption and is allowed free entry once a week. Those adopting an animal for a year can have their names displayed at both entrances of the national park.

Park authorities say every day they receive 10-12 enquiries from across the country and abroad. Though the scheme is now open only to Indian nationals and organizations, they are debating procedures for accepting overseas requests.