A range of financial options to choose from

City buses need to be affordable as well as comfortable and efficient. It is well known that bus operations would cost anywhere between Rs 20 per km and Rs 50 per km, depending on the cost of the bus and its operating cost (particularly fuel efficiency and staff). Who will pay this cost?

In Delhi, for instance, a two-km trip costs Rs 3, and no trip costs more than Rs 10. "The answer," said Dinesh Mohan, professor at the transport department of IIT-Delhi, "is that buses not only need to lure motorists but also motorcyclists." A motorcyclist spends as low as Re 1 per km--in order to compete, the bus needs to carge a fare that will attract two-wheeler riders, he said. "There is also about 30 per cent people in a city like Delhi who survive by doing petty jobs, and for them spending even Rs 10 a day or Rs 300 a month only on travel is out of question; hence the fares are low," he said. 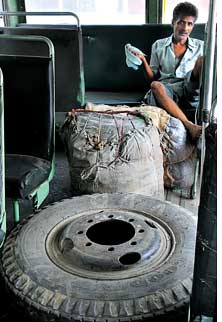 How can bus companies operate on low fares? A toolbox of options came from the non-profit Centre for Science and Environment--ways to reduce the bus cost and ways of paying for bus operations. "It is ironical that buses were charged more excise duty than cars till recently," said Anumita Roychowdhury of its Right to Clean Air Campaign. She had written to the Union finance minister to waive off the excise duty in the last budget. "Instead, we got a 8 per cent reduction, which puts the bus carrying more people per litre of fuel consumed in the same class as the small car," she said.

She suggested ways to reduce the running cost of the bus by reducing passenger and other taxes, and neutralizing it by higher tax on private transport. Cars and two-wheelers pay a small life-time road tax now, while public transport is taxed every year, it pointed out, calculating that cars pay a measly tax of Rs 533 computed annually, as compared to Rs 13,765 that buses pay as annual tax. "This needs to be corrected and reversed," the proposal stressed.

In addition, it proposed a kind of congestion tax as also increased parking rates to finance public transport. In Delhi, the traffic volumes at key intersections and stretches of central business districts like Connaught Place far exceed their designed capacity, observed a city plan made by ILF&S Ecosmart. This area around Connaught Place, along with a proper buffer zone, can be designated a congestion-charged area. This would mean private vehicle owners entering or exiting it would be charged a specified amount as congestion tax.

A 2002 traffic study by the Central Road Research Institute computed a large revenue potential from congestion levies. Another way to collect money for public transport is through a strict parking policy that forces car owners to pay by the hour. A graded fee can also be introduced to have separate rates for parking during peak hours and non peak hours.

For those interested in finding the money for public transport, there are options. But will bus makers build a bus version of the Nano; an ultra-modern bus that is affordable? Would Indian cities find business models to run these buses efficiently? Would these cities let a bus system drive their lives? There is clearly more to the bus, than its idea.