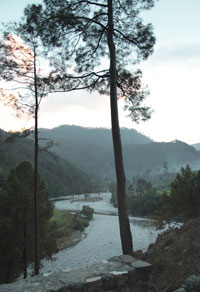 The people of Chepdu village in Pindar valley treasure the fair held every June in memory of an army man from the region who was posthumously awarded the Ashok Chakra. This year, however, his widow Bimla Joshi has cancelled it. She cannot accept Rs 3 lakh that the Satluj Jal Vidyut Nigam Limited (SJVNL) offered for arrangements. The public sector undertaking plans to build a 252-MW hydel project and a dam on the river Pindar in Uttarakhand’s Chamoli district.

The village agrees with Bimla. The Pindar is the only tributary of Alaknanda whose flow is yet to be obstructed by a dam. “When we are born, the water of the Pindar is poured over us. Our last rites are performed in the same river,” says Bimla, who has lived half her life as a widow. “I cannot allow the company to capitalise on my husband’s name,” she says. The dam would threaten the life and ways of 20,000 inhabitants of the district; it will reduce the river’s 22-km stretch to a mere trickle. According to the project documents, 491 families from 16 villages may get affected while agricultural land and homes of 26 families could get submerged. The valley also falls in a sensitive seismic zone. It is prone to landslides that can isolate the residents of the valley for weeks.

Earlier, the plan was to build a 90-metre-high dam, but stiff opposition forced the Uttarakhand government and SJVNL to moot a new plan in 2007 to convert the project to run-of-the-river type.

The height of the dam is proposed to be reduced to 35 metres. Energy generation potential, however, has not been reduced much—from 300 MW to 252 MW. The water of the Pindar will be diverted through a 17.9 km tunnel running parallel to the river, which will lead to the powerhouse downstream. As a result, the river’s downstream stretch will have reduced flow (see map).

The project will cost an estimated Rs 1,358 crore at June 2010 price levels. The Centre will bear 70 per cent of the cost and SJVNL 30 per cent. The company has allocated Rs 35.4 crore to rehabilitate those affected.

“The government says the hills in the state are getting empty. But migration occurs because of such projects which destroy the culture and the landscape,” says Vimal Bhai, activist with Matu People’s Organisation, a campaign front against dams. He, along with Bhu Swami Sangharsh Samiti, a local organisation, is trying to convince Union environment minister Jairam Ramesh to allow the Pindar to flow unrestricted.

To reach a concensus on the project, the authorities organised two public hearings in October 2009 and July 2010. But the residents vehemently opposed them. The district administration alleges the mob went out of control, broke chairs, television projectors and destroyed official documents. So when the third public hearing was held in January this year, the administration set up the dais about 3.5 metres above the ground.

“This is just a smear campaign,” says Vimal Bhai. “Our protest is non-violent. We have videographic evidence that people were not given a fair representation,” he adds. Barricades were set up to prevent entry. Only those associated with SJVNL were allowed on the dais. When an anti-dam activist got on the stage, the public address system was allegedly tampered with.

SJVNL hired about 25 students for Rs 10,000 from Government Degree College Karnaprayag to display supporting banners during the public hearing, says Dinesh Misra, a Sangharsh Samiti leader. “They also got support from households that earn rent for letting out their property to the company. But they are in minority,” he says.

The consent of all affected panchayats is necessary for the project. SJVNL claims five village pradhans have already given their consent. While speaking to Down To Earth, the pradhans of Chepdu and Tharali villages denied the claim and alleged their signatures were forged.

In December 2010, the Chamoli district Block Development Committee, comprising 66 elected members—20 panchayats, 44 pradhans and two zila panchayats—expressed its opposition to the project. The committee’s chairperson D D Kuniyaal, however, changed his stand at the January public hearing. “After committing to the cause, he compromised our interests. He said we can progress only if the dam comes up,” says Pushkar Bisht, a committee member.

Matu Jansangthan and Bhu Swami Sangharsh Samiti organised a “people’s public hearing” in April where environmentalists and academics were invited.

The environment ministry’s expert appraisal committee (EAC) has received demands to hold another public hearing. “We have sought more details from the company and will take a decision after it responds,” says Sanchita Jindal, member secretary of the EAC. SJVNL officials say they will respond by mid-July.

The most important issue is flow of the river. According to the project documents, reduction in the flow is unlikely to have an adverse impact on the river’s downstream users because people there use water of rivulets. While this is true, those engaged in fishing, collecting and selling sand, limestone and drift wood will lose their source of livelihood.

The document admits the project will bring about significant changes with the fast-flowing river transforming it into a quiescent water system. During the dry season, from December to March, 2.97 cumecs of water is proposed to be released from the dam. About 1.75 cumecs get added to the river through nine rivulets between the dam and the powerhouse. Thus, the flow of the downstream stretch till the powerhouse during the dry season will be about 5 cumecs. The current flow of the river is about 20 cumecs.

According to the EAC, details of the flow of downstream rivulets are sketchy and do not specify that the dam will not cause any ecological damage. While considering the project for environmental clearance, the EAC asked SJVNL on April 29 to study the project area and ensure that aquatic life, including snow trout and mahaseer, is not disturbed.

This tributary of the Ganga is believed to free the souls of the departed. It is a place where the last rites, or pind daan as they call it, are performed. Hence the name Pindar. “Our lives and death depends upon the free flowing river,” says a Chepdu village resident. 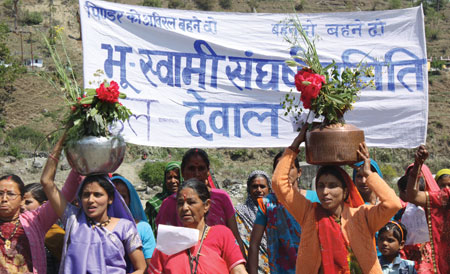