Incorrect data spurred on the discovery of Pluto 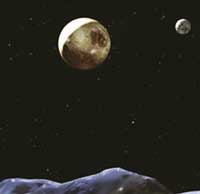 On March 13, 1930, the Lowell Observatory in Arizona, usa, announced the discovery of the ninth planet of the Solar system, bringing an end to an exactly 150-year old search. On March 13, 1781, the German-born English astronomer William Herschel (1738-1822), more or less accidentally discovered Uranus using the biggest telescope then available. It was a momentous discovery: no one in recorded history had till then ever discovered a planet. The five planets, Mercury, Venus, Mars, Jupiter and Saturn, were easily visible to naked eye and every ancient civilisation worth its name had recognised them. But the discovery was to trigger some disquiet among astronomers culminating in the discovery of Pluto.

For, Uranus was not moving through space as astronomers had calculated using the Newton's laws of gravity. To tide over the problem some questioned the validity of Newton's laws over large distances; others suggested the existence of a planet beyond Uranus that was exerting gravitational influence on it, thereby making Uranus stray from its computed orbit.

That planet, Neptune, was discovered in 1846. Nonetheless, the discovery could not account for all observed disturbances in Uranus's orbit. Moreover, Neptune itself was seen to have orbital influences of its own. So, was another planet waiting to be discovered?


Born into a wealthy and well-known Bostonian family, Percival Lowell showed interest in mathematics and astronomy even in his graduate days, but spent his first 17 years in business and served in the American diplomatic mission in Korea. Lowell called the unknown planet, Planet x -- x being the symbol for the unknown. Using the perturbation theory devised by other astronomers, Lowell made a rough calculation of the likely location of the speculated planet. He used a telescope in his private observatory at Arizona.

The first search started in 1905 and lasted three years. By then the perturbation method was abandoned. The new method relied on taking photographs of night sky, days (or years) apart, and comparing them. Four hundred photographs of the sky were taken with the same area photographed twice. The painstaking examination led to the discovery of variable stars, comets and asteroids -- but no new planet.

Taking two photographs and comparing them was fine, but it was not humanly feasible to pore over countless dots hoping to find one that moved between one photo and another. In 1911 Lowell obtained an ingenious mechanical optical device, the Blink Comparator. The contraption relied the human eyes' ability to detect motion or change. Two photographs were kept side by side in precise alignment and the two images were flashed back and forth in rapid succession. Against the backdrop of stationary stars any speck on the two photographs that brightened or dimmed or shifted position between one to another, became immediately apparent. Thus in plates taken a few days apart, rapidly moving objects such as asteroids and comets would stand out, because they would appear to be jumping back and forth between two positions, while all the other fixed stars stood still. Plates taken at longer intervals could be used to detect stars with large proper motion, or variable stars, or to distinguish binary stars from optical doubles.

But Planet x remained undiscovered. Lowell died in November 1916, bequeathing a large sum to the Lowell observatory. In 1929, Vesto Slipher, the then director of the observatory re-started the research. On the lookout for a suitable assistant, he chanced upon 24-year-old Clyde Tombaugh.

Tombaugh recast the programme by taking three instead of two sets of photographs, each one to two weeks apart. The campaign began in April 1929, but the year went by and there was no sign of Planet x.

On February 18, 1930, Tombaugh was scanning a pair of plates taken on January 23 and 29, when he noticed a minute speck of light, shifting from plate to plate exactly as a trans-Neptunian planet should. Within a month he announced the discovery of the new planet, Pluto. Even then, calculations indicated that Pluto was still too small to account for the perturbations in the orbits of Uranus and Neptune. But it has now become clear that actually there were no residuals in the orbit of Neptune or Uranus; the then calculated disturbances were based upon incorrect data.