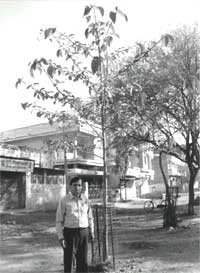 born in 1950 in Ratlam district of Madhya Pradesh, Rakesh Trivedi has a multi-dimensional personality. A professor of zoology in the Gujarati Science College in Indore, he is also director of the ecoestate faculty of the Centre for Environment Protection, Research and Development ( ceprd ) and writes for Naiduniya , a Hindi daily. But it is his obsession with trees that has earned him the title of "Vrikshya Kumar" (Tree Man).

This obsession dates back to his school days, but the real work started in 1975 when he joined the college as lecturer. He began motivating a number of organisations, social clubs, schools and colleges to plant trees. "At that time, it was difficult to locate him as he was always on the move," recalls Trivedi's wife Rekha.

Two years later, supported by friends, retired officers and students, Trivedi formed a voluntary organisation called Ecosociety, and began spreading the message through slogans. "It was widely appreciated, but there was no participation from the people," says Trivedi. Mobilising people was a tough job so he started a campaign called "Smriti tree plantation" in 1978, where relatives of deceased persons were persuaded to plant trees in their memory. To begin with, the society prepared a list of dead persons. Then the relatives were approached and persuaded to plant trees.

This campaign was covered by the media and, soon, people were approaching the society with requests to plant trees. Finally, in the month of July, the tree plantation campaign was launched at Sukh Niwas Road in Indore, which is now officially known as Smriti Marg (Memory Lane). The saplings were freely provided by the forest department and the four-month monsoon showers helped the young saplings grow roots.

This campaign continued until 1985. Unfortunately, when Trivedi stopped the campaign, there was no one to take it up elsewhere. "Neither the people, nor the government," says Trivedi. "But it is still one of the best tree-laden roads in the town," says K Wagela, who was involved in the drive and currently works for the Madhya Pradesh Pollution Control Board. "He single-handedly established the scheme when nobody thought about the environment," says Abhay Chajjlani, editor of Naiduniya .

Until 1985, about 3,000 trees had been planted along the road. However, if trees planted by the society in the entire city are taken into consideration, the number goes up to 6,000, says Trivedi.
What started as an aggressive campaign to spread environmental awareness, however, has failed to spread outside the city. Trivedi blames it on the lack of infrastructure. He sought help from the government to extend the idea to other villages and towns though panchayats and municipal corporations, but it did not work. The tree man, however has not lost heart. He feels it is all due to lack of environmental awareness among the people.

So, from 1985, he began getting involved in environmental education. Trivedi began writing in newspapers and magazines regularly and giving lectures in educational institutions. He has already formed eco-clubs in many schools and colleges. He has also written a book on environment called Hamare gaon ka paryavaran (The environment of our village) and has also co-authored Science and India , published by the mp Granth Academy, Bhopal.

He is also busy with the new "Keep Indore Green" project he initiated as director of ceprd . Under this project, neem trees are being planted on the 8-km stretch of the Mumbai-Agra highway that passes through the city. In the first phase, some 300 trees were planted along a 1.5-km stretch. This time, Air Tel, the State Bank of India and the IndusInd Bank have been involved in the plantation drive. For three years, ceprd will maintain the highway, after which it will be handed over to these organisations.

But Trivedi still has not been able to forget the Smriti campaign. He is now planning to revive the campaign once again "though, this time, it will extend to smriti van (forest) and smriti street", he says.