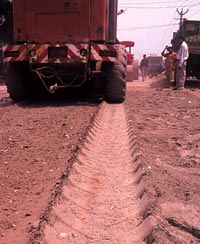 is there a way to deal with the incessant solid waste of India? The answer could be yes, if two technologies are given impetus. Both involve the use of waste material like plastic bags to make roads.

The first technology, developed by Bangalore-based K K Plastic Waste Management Limited, entails using plastic waste along with bitumen -- the conventionally used ingredient to make roads. There are two ways of doing so: dry mixing and wet mixing. Dry mixing implies that plastic waste (mainly polythene bags) is shredded and then mixed with bitumen. In wet mixing, plastic is reduced to a powdered form and then mixed in bitumen. "Our study shows that in the powdered form, plastic is able to bind better with bitumen," says Sunil Bose, deputy director of the New Delhi-based Central Road Research Institute (crri), which has approved the technology for countrywide use.

The technology can help overcome the drawbacks of conventional system -- roads containing plastic do not easily develop cracks when water seeps in. Plastic also resists the softening of bitumen at high temperature and friction.
The Delhi government has shown keenness to promote the technology. The Municipal Corporation of Delhi has already identified a one-kilometre-long stretch of the Underhill road near Delhi University to implement a pilot project. "But at present, there are no plants in the city to process the waste. Hence, only a few projects will be undertaken in the near future," reveals an officer of the city's Public Works Department. New Delhi will be the second city after Bangalore to use the technology. The Bangalore City Corporation has used it for laying down roads in areas having high traffic density.

The only downside of the technology is the capital cost -- for any given stretch of road, cost of using dry mixing will be 15-20 per cent higher than that of conventional technology; cost of wet mixing will be about 30 per cent more. "But the expense can be recovered in the long-run, as these roads require less maintenance. Moreover, using plastic means solving a mammoth environmental problem -- on an average, two tonnes of polyblend (plastic bags) is required for each kilometre of road," asserts Bose.
For those troubled about outlay, there is another technology, not only cost-effective, but helps dispose of any type of waste, including hazardous substances. It involves the use of fujibeton -- a material developed by the Japan-based company Fujimasu Synthetic Chemical Laboratory Corporation. Fujibeton is an polymer that binds with all compounds. In other words, it can artificially fossilise any substance, including soil, which can then become the base of a road.

The process of using fujibeton to make roads is simple. Surface soil is first loosened with the help of a cultivator. Then a mixture of fujibeton, cement and any waste is spread on the soil. Subsequently, all the ingredients are mixed and water is sprinkled. Thereafter, the materials and soil are again mixed. Finally, a thin layer of concrete is laid. Using the process, a one-kilometre-long and seven-metres-wide road can be build within three days.
As part of its pilot project, Haryana-based National Council for Cement and Building Materials (ncb) laid down a 0.3-kilometre-long road within its campus on May 10, 2002. Evaluation of the road shows that it is stronger than the conventional roads and almost maintenance-free. Tests conducted by ncb also prove that the waste material encased in the road do not leach and hence do not lead to health problems. Furthermore, the cost of the technique is less -- for a road that is one-kilometre long and seven metres wide, the cost of using fujibeton is Rs 10 lakh, but that of bitumen is Rs 12 lakh.

"The biggest advantage of using fujibeton is that the road is free of aggregates (rocks). This means that there would be no mining of rocks to make the road base," says Shiban Raina, director-general of ncb. Conventionally, coarse aggregates are used for the construction of roadbeds. But in case of the fujibeton technology, the hardened soil itself becomes the base. "Moreover, no money is spent on purchasing and procuring the rocks from long-distance. This also reduces the cost of operation. Construction time is also very less," states Satish Sharma, group manager, construction development and research, ncb. Use of the technique also means that even the remotest parts of the country could be connected to the cities. According to Shiban, the technology can even help provide employment to many, as no skilled labour is required for the road construction process.

In Japan, the technology has been used on a wide-scale. But why is the Indian government not adopting it? "We keep informing the officials. But when it comes to implementation, the government gets changed and the situation comes back to square one," asserts Raina. With any luck, the present Union government would ensure the effective implementation of both the technologies.