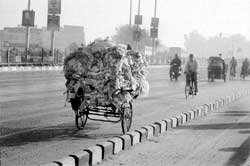 the Union government notified the Recycled Plastics Manufacture and Usage Rules, 1999, in September last year. They were supposed to do away with the menace of plastics. But a year down the line, it is evident that the rules have fallen flat. In fact, they may have abetted the growth of plastic trade in India.

The government of Sikkim had banned plastic bags way back in 1998 after the demise of 27 people in a landslide caused by dumped plastic bags. Other states too have come up with their own regulations and rules to restrict or ban the use of plastics and plastic bags. These include Goa and Maharashtra (see box: Goa and Mumbai: choking the bag ) and Himachal Pradesh. In the state of Delhi a bill on the issue has been pending approval from the assembly for quite some time now. Evidently, a plethora of laws and regulations do not go into ensuring a clean environment. Especially when they have been made with a muddled perspective. Ravi Agarwal, director of, Shrishti, a Delhi based non-government organisation ( ngo) says, "The rules are without rationale."

The Union ministry for environment and forests ( moef) had set up a National Plastic Waste Management Task Force ( npwmtf ) to 'formulate a strategy and action programme for the management of plastic waste'. The task force was chaired by the Central Pollution Control Board ( cpcb ) chairperson and had representatives from the municipal corporation of Delhi, the moef , Confederation of Indian Industries, Federation of Indian Chambers of Commerce and Industry and the plastic industry. No ngo was invited to participate. The task force submitted its report in 1997. The government made its rules, supposedly, on the basis of recommendations of the task force.

The central government notification included rules on two important issues, besides others:

• No vendor shall use carry bags or containers made of recycled plastics for storing, dispensing or packaging of foodstuffs.

Down To Earth investigated the origin of the 20-micron rule. "It was one of the suggestions of the task force to increase the thickness of plastic bags so that they are easily picked up by the rag pickers," says D K Biswas, chairperson of cpcb . "If we increase the thickness, the prices will go up which will result in restricted use of these bags. On the other hand the desire to throw it everywhere will also get reduced," he added. But the 20 micron limit is not specifically mentioned in the task force report. Agarwal says, "The central government has no particular logic for creating this 20 micron thickness limit." Officials of the moef, when quizzed, claimed that the task force had recommended the limit. Arun Kumar Attri, professor at the School of Environmental Sciences in the Jawaharlal Nehru University, New Delhi, says, "I could not understand how the Union government's ban on plastic bags with thickness less than 20 micron will help in bringing down the amount of plastic in the environment." And this is reaffirmed by Shanta Bhushan of Kalpavriksh, a Pune-based ngo, who says, "After the successful drive against plastic bags in Pune, small vendors stopped using plastic carrybags thinner than 20 micron. But now thicker bags, especially granulated ones, have appeared. This has now begun creating problems. This is what we had feared." 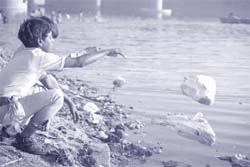 Technically too, the imposed limit does not hold good. "Thin bags are more efficient in terms of energy conservation as they reduce the amount of plastic in the environment by weight," says Attri. "Plastic bags of more than 20 micron are ultimately going to produce more plastic. Greater thickness means more amount of plastics in the environment," says C K Varshney, professor at the School of Environment Science, Jawaharlal Nehru University, New Delhi. "The increase in thickness from 10 micron to 20 micron will require double the amount of plastic for the same level of usage and will therefore add considerable amount of plastics to the environment," he adds. According to him plastic bags should be completely banned. Even if the thickness is increased the 'throw away tendency' of these bags will persist. "One needs to think over the entire issue again," says Raghunath Mashelkar, director general of the Council for Scientific and Industrial Research (csir). Down to Earth took a few bags and got them measured at the physics department of the Indian Institute of Technology, Delhi. The thickness of the bags can be measured with the help of an instrument called the micrometer screw gauge. Measuring the bag, once a person has the screw gauge is not a problem. The question which needs to be answered, therefore, is: do all people have the screw gauge and if the difference in thickness is not visible then what purpose does this arbitrary limit serve? "We pick up all the plastic bags. We do not consider the thickness," says Mohammed Saiddul, a rag picker based in Saket in Delhi. "Why do we need to distinguish between a thick or a thin bag when we get the same rate for them?" adds another rag picker Alamin. The market reveals more about the issue than the endless debate.

"At present there is no way but to slowly phase out plastic products like polythene bags which have a short useful life," says Bharati Chaturvedi of Chintan, an environmental research and action group, based in New Delhi.


The muddle in Goa is an indicator of how the laws have themselves obfuscated perception regarding the issue. The term 'plastics' encompasses a wide range of materials that are capable of being moulded without a permanent change in their chemical structure. It is composed of small chemical units called monomers (constituted of atoms of carbon and other chemicals) joined together to form a string (polymer). 'Plastics' is, therefore synonymous to polymer (poly -- many, mer -- units). Polymers such as polyvinyl chloride ( pvc ), polystyrene ( ps ), polyamides (nylon), polyethylene ( pe ), polyethylene terephthalate ( pet ) are the ones commonly used for making a variety of plastic products. And the plastic bags are nothing but the polymer polyethylene. Polyethylene, combined with chemical softeners and other additives can be modified into high density polyethylene ( hdpe ), low density polyethylene ( ldpe ) or linear low density polyethylene ( lldpe ) to produce different type of plastic bags and other materials like cans and bottles. They are non-biodegradable.

And the bags can be made by using only virgin plastic or by mixing used plastic in different proportions. The used plastic may have been recycled just once or multiple times. But every time the plastic is recycled it loses some of its desirable characteristics like carrying strength and toxins are realised in the process of recycling. The Bureau of Indian Standards and the Union government notification concur that no recycled plastic should be used for foodstuff.

Consider the size of the vexing problem. Plastic waste comprises 1-4 per cent of the total 80,000 tonne of Municipal Solid Waste ( msw) generated everyday in India in terms of weight, says the task force report. This works out to 800-3,200 tonne of plastic each day. In India 60 per cent of the plastic waste collected gets recycled. The rest remains on the streets or dumps, choking open drains and animals; in extreme cases it causes landslides, such as the one in Sikkim. The plastic recycle trade is carried out by small time businesses in an unregulated manner. The polymer and virgin plastic market, demanding high-end technology and high investments, is the monopoly of few big players. Robert Edwards and Rachel Kellett in their book Life in Plastic say 'only two companies dominate the polymer industry in India. Reliance Industries Limited and Indian Petrochemicals Corporation Limited. Reliance alone held a 56 per cent share of the plastics market in 1998 with market shares of competitors gobbled by the huge capacity built over years.

Assuming that the plastic waste collection level remains the same and that the demand for the bags or other plastic-based goods does not increase, both hopeful impossibilities, India's streets will be littered with 116,800 tonne at the best or 467,200 tonne of uncollected plastic waste in the worst case scenario each year. The task force estimates that the post consumer plastic waste will reach 3.6 million tonne by the year 2006-07. And that plastic consumption will increase from 1.8 million tonne in 1995-96 to 8 million tonne in 2006-07. Now, if in this scenario is factored in the fact that the 1999 notification bans the use of recycled plastic in producing carry bags used for food products it becomes evident that the demand and consumption of virgin plastic is bound to increase over the coming years.

Who gains? Manufacturers of virgin plastic and polymers. The Recycled Plastic Manufacturers and Traders Association ( rpmta ) claims that these rules will mean adding at least 3,000 metric tonne of extra plastic daily to the environment. Anjum Vijay, a representative of rpmta says that if the notification is enforced strictly, an extra 100,000 tonne of pe may need to be produced to meet the current consumption . The moef or the task force has not undertaken any quantitative research to find out how much plastic the notification may add to the augend. Vijay says, "the recycling community was not consulted during the task force meetings and consequently the government, with its rules, has played into the hands of vested interests."

He adds, it is against the international trend in plastic trade. Internationally, he claims, the focus is on the three 'R's

This notification, he claims will not achieve what it means to. Incidentally, a look at the Annual Report of ipcl for the financial year 1999-2000 shows an increase in installed capacity for polymers from 863,657 metric tonne (mt) in 1998-99 to 992,690 mt in 1999-2000. The figures are for all kinds of polymers produced by ipcl , including polymers used for plastics. The annual report claimed the ldpe and hdpe plants worked close to the plate capacity. Sets one thinking, if the notification is reducing the plastic in the environment how come one of the bigger players in the plastic trade is having a booming business. Edwards and Kellett say the central aim of reducing the resource flow of virgin materials seems to have been forgotten.

The task force's terms of reference included 'to propose incentives, penalties, levies for checking of plastics packaging wastes. But paragraph 2.11.4 of the task force report says, "To sustain the image of plastics through carry bags, certain gradation and acceptable consumer quality must be insisted and adhered to by the manufacturers to dispel the concept of 'Ban use of carry bags'." The task force report gives a clean chit to the virgin plastic-based bags, saying, "virgin plastic bags are desirable in the market". The larger goal of the entire exercise -- that of reducing plastics -- seems to have been lost.

The Delhi Plastic (Manufacture, Sale and Usage) and Non-biodegradable Garbage Control Bill, 1999 has been hanging fire for long as well. It too fails to address the core issue and skirts it by just regulating the type of plastic being used for food products. In the second chapter of the bill it prohibits "manufacture, sale etc of any recycled non-biodegradable bag, containing inorganic or organic pigment liable to cause damage to human beings and environment" to be used for carrying or packing food. Notably, the bill forgets to mention the virgin plastic bags. If the bill does see the light of the day, more plastic carry bags may engulf the residents of Delhi.