An affidavit filed in the Supreme Court by the Indian automaker TELCO suggests a misinterpretation of the WHO's views on air pollution. The motive is easy to guess: to protect the commercial interests of the company, even if it means obfuscating the serious threat to public health. Anumita Roychowdhury investigates 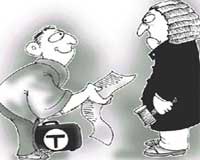 the Tata Engineering and Locomotive Company ( telco ) filed an affidavit in the Supreme Court in the case regarding air pollution in Delhi on October 4, 1999. It appeared to misrepresent the World Health Organisation's view that there are no safe levels of particulate pollution, and undermined the seriousness of air pollution and the death and disease that results from it in Indian cities, Delhi in particular. But the who official who was quoted in the affidavit was present in Delhi on that very day to verify the organisation's stand and prove the company wrong.

Two explanations are possible: either telco does not understand the significance of who 's views or it is trying to spread misinformation on the issue of particulate pollution. The first would indicate that the company does not have enough professionals who can understand scientific matters and thus is not serious about the slow murder that air pollution is causing in Delhi. The second could mean an effort to mislead the Court on the sensitive matter. The affidavit is in response to a proposal by the Environment Pollution (Prevention and Control) Authority ( epca ) to ban registration of private diesel cars in Delhi that is being considered by the Court. epca has made this proposal as part of its ongoing efforts to find solutions to the air pollution problem.

While there is alarm all over the world about the deadly effects of suspended particulate matter, especially in view of who 's warning that there is no safe level for particulates, telco has obfuscated the issue by interpreting who 's position as follows: "...(the) threshold for the onset of the health effects has not yet been detected for particulate emissions. This means that the safe levels have not yet been identified, which is totally different from stating (as epca has done) that there is no safe level of particulate pollution." Thus, telco 's effort could amount to misleading the Court by claiming that who is yet to 'identify' the safe level, as against who 's findings that there is no safe level.
It was a fateful coincidence that Dietrich Schwela of who , scientist and an expert on air pollution who had been quoted extensively in the affidavit, was present in Delhi on October 4 to participate in a three-day conference on Health and Urbanisation organised by the Centre for Science and Environment, New Delhi. He called telco 's bluff the same day. When his attention was drawn to the text of the affidavit for clarification, he tried to hide his amusement, and said, "This interpretation is certainly not correct (see interview: "You cannot deny the truth indefinitely" ).

"I presume they are quoting from what we have on the Internet. What we are saying is that effects occur at any concentration . There is no threshold for the onset of effects. Meaning that for each concentration of particulate matter, there are already observed effects, starting from the lowest concentration of about 10 microgrammes per cubic metre (g/cum) and going up to 150-200 g/cum (which is the point till which who measured). So, at each intermediate concentration there are health effects. There is no safe level. Particulate matter is treated like the way experts would treat carcinogenic compounds. For this, we use unit risk, which tells you about the probability of developing cancer during a lifetime with the exposure to 1 g/cum of a carcinogenic compound."
It is clear that telco has resorted to misrepresenting scientific facts simply to protect its investment in diesel cars. The dieselisation of the Indian car market is under attack due to serious public health concern over toxic particulate emissions and severe particulate pollution load in the capital. telco 's move almost amounts to a panic reaction following the submission of epca 's fifth report to the Supreme Court, which presents the enormity of the particulate pollution problem.The levels of respirable particulate matter (particles that are extremely small and penetrate deep into the respiratory tract) reach eight times the permissible standard in Delhi - far beyond the levels for which who has measured their health effects, because they are just not found at those levels in Europe, for which these studies were conducted.

Schwela pointed out the alarming effects of particulate pollution on daily mortality and morbidity at an ambient concentration of only 200 g/cum. When asked what would be the burden of death and disease in Delhi, where the levels reach 800 g/cum, he said this was a cause for serious concern.

telco 's strategy to counter the campaign against the dieselisation drive is getting to be increasingly tricky. Paranoid about its business being affected by the growing realisation of the harmful effects of diesel emissions, telco has resorted to a campaign to mislead people about the risks. telco has gone to the extent of hiring a public relations agency, Burson-Marsteller Roger Pereira, to prepare pamphlets espousing diesel as a green fuel and as the "fuel of the future". This came to light when the agency approached V Ramalingaswami, national research professor and president of the National Institute of Immunology, with a newsletter published by the agency. Ramalingaswami is one of the 17 eminent physicians and health experts of the country who had signed a statement of concern about the particulate pollution levels of Delhi and the need to control the dieselisation of the private vehicle fleet. When Down To Earth approached the agency, it was asked to get in touch with J Ramnath, consultant adviser to telco .

The situation is quite ironic. While telco is trying to garner support for their dieselisation drive on the ground that the number of diesel cars are increasing in Europe and elsewhere with the active support of governments - and down-playing the gravity of the particulate problem - representatives of the environmental authorities from those countries are presenting an entirely contrary picture.

One such expert is Shankar Prasad, community health adviser to the California Air Resources Board ( carb ), usa . "If small particulate pollution level in California ever reached the same levels as in Delhi today, Californian environmental authorities would have declared an emergency, shutting all emission sources in the city and taking vehicles off the road," he noted during a public lecture held recently in the capital (see graph: Life is cheaper in urban India ). In his lecture on translating health concerns into air quality regulations, Prasad discussed the acute and toxic effects of air pollution and strategies to control them (see interview: "There is enough evidence available to help India act" ).

Prasad said that particulate matter, along with ozone, tops carb 's list of priorities for pollution control, even though the ambient concentration is close to the standard and only on rare occasions reaches the maximum level of 170-200 g/cum. As compared to this, the level in Delhi is always 3-5 times the standard.

According to Prasad, carb has been most successful in putting in place well laid out processes to identify toxic air contaminants ( tac s) as special targets for controlling air pollution. "The pollutants that may cause or contribute to an increase in death or serious illnesses are identified on the basis of a scientific assessment," he pointed out. This process became well known in 1998 when diesel particles were formally designated as tac s after almost a decade of assessment. Once a substance has been identified as a tac , actions to reduce risk from it are instituted, he said. As part of this risk management, carb consults the local air districts, affected industries and the public to strengthen regulatory actions in order to protect the public from exposure to a tac .

Diesel exhaust was included in the tac designation process in 1989 and has undergone repeated reviews, elaborate processes of public consultation and a series of scientific conferences. Despite opposition from the trucking industry and engine manufacturers, the process led to the final endorsement of diesel particles as a tac by the California Scientific Review Panel in 1998.

"Identification as a tac will now begin the long process of actually controlling diesel emissions under Californian law," said Prasad. "We are looking at all the possible options for best and immediate effect. Now, our focus is on reducing risk from diesel particles and, therefore, it is our conscious decision to shift towards alternative fuel."

Reports are pouring in on how California's South Coast Air Quality Management District ( scaqmd ) is crafting a new strategy to reduce the health threat from diesel exhaust. "The ambitious plan, already under attack from the trucking industry, could lead to the nation's first comprehensive regulations for battling air--borne toxic substances," reports the September 1999 issue of Car Lines , a us journal on emissions, engine technology and fuels. Because diesel engines are blamed for most of the high risk, scaqmd is laying the groundwork for regulations as early as next year that might force some fleets of vehicles, especially trucks, to use alternative fuels rather than diesel.


Even the air quality regulators of California have had to face strong opposition from the industry. Prasad says that carb received a petition signed by 7-8 groups, including the Engine Manufacturers Association and the American Trucking Association, saying that the risk number is wrong and that they will have to vacate the tac identification process.

They cited a report from the Health Effects Institute ( hei ) in Boston, usa , which apparently had recommended another quantification of the risk assessment. Industry was using hei 's recommendation to confuse the issue by implying that risk assessment for diesel exhaust is wrong, a situation that bears a striking similarity to telco 's desperate bid to misrepresent who views on particulate pollution.

carb rejected the petition and forwarded a copy of the petition to the office of Environmental Health and Hazard Assessment ( oeha ) to find out the validity of the claim. "The hei study is just another inter-pretation of the existing epidemiological studies. hei does not say that diesel exhaust is not a carcinogen," Prasad pointed out. In a letter to the petitioners, hei has clarified and corrected several areas where the petition either states or implies conclusions that hei did not reach.

Similar resistance surfaced when the us Environmental Protection Agency ( epa ) proposed tighter standards for particles smaller than 2.5 micron in diameter. The proposal was challenged in the courts. But Prasad believes that epa is going to stand by the standard it has proposed: "They are very satisfied and feel that the court will not vacate the standards."

Clearly, industry is not going to take kindly to any environmental challenge to their business plans, be it in India or elsewhere. telco 's recent move to attack the epca report only proves the point. What remains to be seen, how-ever, is whether the attempts to confuse the issue will succeed or not? They seem to have failed in the us .