Information technology professional John Alexander, 58, had diabetes for 15 years. About two years ago, he shifted to a widely accepted Ayurvediac therapy of consuming cinnamon to control his blood sugar levels. In the course of time he developed an abnormal liver. Doctors could not figure out the cause of his disease as his diet and lifestyle did not warrant such problem. His wife, Mary, looked up for information on the Internet and realised that the cinnamon Alexander was consuming could be the culprit. There were reports saying a harmful species of the spice was being sold in the name of cinnamon. “John stopped taking cinnamon the day we read the articles. In three-four months his liver tests showed substantial improvement,” Mary says.

Cinnamon is a must spice in an Indian kitchen, be it for preparing the famous Hyderabadi biryani and desserts or spicy curries. It is also an important ingredient in the Ayurvedic medicines. Apart from lowering blood sugar levels, cinnamon can help reduce cholesterol levels significantly, fight nausea and prevent arthritis.

However, what is primarily available in the Indian market in the name of cinnamon (Cinnamomum zeylanicum) is its alter ego—cassia or Cinaamomum cassia. This fake cinnamon contains a chemical, coumarin, which is used for making rat poison, according to the German Federal Institute of Risk Assessment. Coumarin can damage liver and kidneys in humans even if taken in relatively small doses. The daily tolerable intake of coumarin is 0.1 mg per kg of body weight and it is estimated that one kilogram of cassia powder contains 2.1 to 4.4 g of coumarin, says the institute. In September 2012, it issued a note, advising people to stop using casssia. 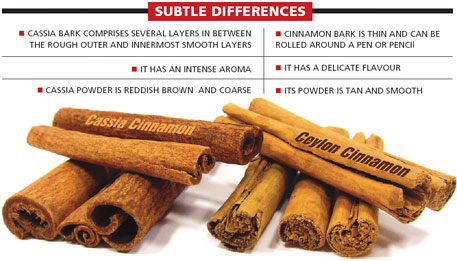 Traditionally both cinnamon and cassia have been used worldwide as spices and for manufacturing perfumes and cosmetics. But with studies showing health problems caused by cassia, several countries have imposed restrictions on its imports. So far, most European countries have banned the use of cassia in food items, while countries like the US, Germany and the UK import it only for making rodent poison.

India, the world’s leading spice producer, exporter and consumer, is yet to act against cassia despite several studies documenting its harmful effects. In 2010, the Indian Institute of Toxicology Research (IITR), Lucknow, found that coumarin can damage liver and kidneys. “Oil extracted from cassia leaf also contains 8 per cent of coumarin. It can cause intestinal ulcer if consumed in large quantities,” says M Ananaraj, director of the Indian Institute for Spices Research in Kozhikode, Kerala. Cinnamon contains negligible amount (0.004 per cent) of coumarin, he adds.

Absence of regulatory mechanisms also means the poisonous alter ego of cinnamon continues to flood the Indian market. Though they do not look identical, they have similar smell and flavour due to the presence of chemical cinnamaldehyde. Consumers, and even retailers, unaware of the fraud get easily duped. “Most people do not know what a true cinnamon looks or smells like,” says a spice grower from Cochin who does not wish to be named. “People prefer cassia as its smell and taste is sharper than cinnamon. My wife insists on buying cassia saying it gives more fragrance to food,” he adds.

Traders are cashing in on this ignorance as well as the low price of cassia.

The import cost of a kilogram of cassia is Rs 35, while that of true cinnamon is Rs 200. Retailers sell it anywhere between Rs 150 and Rs 600 a kg. In a letter to the Directorate General of Foreign Trade (DGFT), S Kannan, director (marketing) of Spices Board wrote, “Since the price of cassia is far below that of cinnamon, traders misuse and encash the opportunity for their benefit by misdeclaration of the product.”

P S Sreekantan Thampi, deputy director (publicity) of Spices Board, says, the average production of cinnamon in India is 80 to 100 tonnes per annum. This is miniscule compared to the annual demand of 12,000 tonnes. To meet this growing demand as well as for re-exporting cinnamon after value addition, India imports about 10,000 tonnes of cassia and 200 tonnes of cinnamon a year, says Thampi. Cassia is imported from China, Indonesia and Vietnam, while cinnamon is mostly imported from Sri Lanka as Ceylon cinnamon.

Leonard John, a cinnamon grower in Kerala, says production of cinnamon in the country can be increased by banning the import of cheap cassia. John and a group of cinnamon growers and activists in Kerala have been demanding the ban since 2007. They have written to various government authorities, including the Union Ministry of Commerce, Spices Board and Food Safety and Standards Authority of India (FSSAI). In a letter to Spices Board, the growers have questioned the import figures of cassia cited by the board. A trader in Kanpur alone imports 9,500 tonnes of cassia. It is impossible that only 10,000 tonnes of cassis enters the country annually, notes the letter.

Following petitions by John and his fellow cinnamon growers, several government agencies have acknowledged the health risks of cassia, but the government is dragging feet over regulating its sale and imports (see ‘Just words’).

In 2008 the Spice Board wrote to DGFT, asking it to list cassia as restricted item for import. “We have also informed the Union Ministry of Health and Family Welfare for taking necessary action,” says Thampi.

FSSAI has acknowledged that cinnamon and cassia are two different plants and classifies cassia an an adulterant. Its website now mentions the difference between cassia and cinnamon. In 2011, it wrote to all food and health authorities to ensure that cassia is not sold as cinnamon. But the sale of cassia as cinnamon continues unabated.

On February 2, John filed queries to FSSAI under RTI, asking the reasons for the delay in taking action against sale of cassia. All that FSSAI said in its reply, dated March 22, was that the authority is in the process of uploading the harmful effects of cassia and that the issue has been referred to scientific panel for analysis of coumarin’s health impacts.

Talking to Down To Earth, a senior official associated with the Spices Board said regulation of cassia should not be a matter of grave concern as the quantity consumed by the Indians is very low.

But what about people like John Alexander who consume two spoons a day? Lack of willpower among the regulatory authorities means even though the harmful effects of cassia have been established, consumer is left with no option but to buy it.