A constable who gets corrupt officials behind bars

Surprise was in store for Sushil Kaushik when in 1989 he first joined duty as a constable in Serkot in Uttar Pradesh’s Bijnor district. He had no idea how corrupt police officials can be.

He saw policemen taking bribes, and superiors deducting constables’ salaries without giving any explanation. Kaushik questioned his bosses on the irregularities he came across.

In Serkot his colleagues would take bribes from villagers who brought fire-wood illegally from reserved forest areas. First he tried looking the other way but he knew he was party to the crime if he did nothing to stop it. He started reporting such incidents to his superiors, but investigations would be hampered by secret deals between cops and villagers. A sting operation by a media organization in 2000 inspired him not to give up.

Kaushik saved money and bought a mobile phone with a camera. Over the years he has recorded and filed countless cases of bribe and illegal custody. He once exposed policemen in Jhansi who kept the money meant for panchayat elections. The district court fined and suspended eight policemen.

He did not spare his own brother even. Kaushik raided his brother’s medicine store because he was selling unpackaged medicines. The family paid the penalties, counselled his brother and sent him to their village Mirzapur in Gautam Buddha Nagar district. Kaushik now lives in Faridabad in Haryana with his father, wife and two children, his brothers and their families. “My family is my support. I often wonder what I would have done if my wife nagged me for saris and jewellery,” said the 40-year-old who believes in leading a simple life.

But other policemen kept their distance from him. They did not want Kaushik in their patrolling team. Ostracization never troubled Kaushik; he believes it is more important to be true to one’s self than to have friends. In any case, he was too busy to let anything else affect him, he said.


Since 2005, Kaushik has filed 150 applications under the Right To Information Act. His recent application is against five superintendents of police (SPs) of Baghpat district in Uttar Pradesh. The police department there has been deducting Rs 10-15 every month from the constables’ salaries. “We did not get any acknowledgement or explanation for the pay cut. So I decided to file an rti appli-cation,” said Kaushik who is awaiting reply. The good thing, though, is the department stopped deducting the money since the application. In another case, he managed to stop an SP from sending constables regularly to work in his sister’s hotel in Bengaluru. Records always showed the constables were on duty in Baghpat. 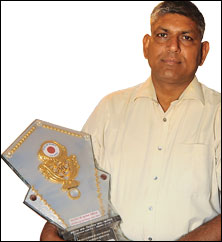 Kaushik’s unpopularity in his professional circles led to several transfers—must have been more than 50 in a career spanning 21 years, he estimates, and adds that he has been transferred 15 times since 2005. At some places he was posted for a day or two.

Set to put in his papers in 2010, Kaushik plans on social work full time. He is currently attached to Swaraj, a project run by the non-profit Parivartan in Delhi on administrative reforms in Indian villages. They have started with awareness programmes in Uttar Pradesh where panchayat elections are due in September this year. On medical leave from work, Kaushik has visited 300 villages in the state in the past two months to talk to villagers on electing an efficient representative.

Arvind Kejriwal, head of the non-profit, said he had rarely seen anyone who was part of the establishment and yet so critical of the corruption in it.

When Kaushik joined the police, a senior officer had advised him caution. He said he was too honest for his own good and needed to be extra careful to survive. “But survive I did, without giving up my values,” Kaushik said.