Does emissions trading adhere to this principle? 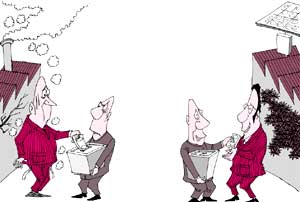 Market-based instruments (mbis), such as effluent taxes and subsidies for using environment friendly technologies, are increasingly being projected as efficient and cost-effective methods of environmental management all over the world. Economists have long argued for the greater use of such methods; over the last decade and a half, international conventions have also advocated greater use of mbis to control pollution. For example, article 6 of the Kyoto Protocol recognises emission trading as an effective means of pollution control. The declaration after the Rio Earth Summit of 1992 also argued for greater use of mbis . However, India -- and many other developing countries -- still persists with the command and control approach to check pollution.

The command and control approach is based on setting pollution standards and then monitoring their adherence. The standards can be on discharge limits, it could stipulate use of specific pollution control technologies or, in some cases, even ban the use of certain pollutants. India's environment protection rules, 1986 -- issued under sections 6 and 25 of the Environment Protection Act, 1986 -- are typical examples of the command and control approach. The rules lay down detailed emission limits, water quality criteria and norms for smoke emission from motor vehicles. However, these measures rarely attain their desired objectives.

mbi s are used in a very limited form in India. Currently, only the Water (Prevention and Control of Pollution) Act, 1976 makes use of such instruments. The act requires industries to pay a cess based on the amount of pollutants they release into waters. The funds collected from the offenders are used to run the state pollution control boards. This mbi is also based on the polluter pays principle. In 1997, while adjudicating a law-suit between the Vellore citizens' welfare forum versus Union of India, the Supreme Court (sc) declared the application of the polluter pays principle as a constitutional obligation. T he sc also stipulated that the polluter pays principle is consistent with the principles of international law.

What then is the polluter pays principle? The term was first used in a 1974 declaration of the Organization for Economic Cooperation and Development States (oecd). T he declaration stated that, "The polluter should bear the expenses of carrying out measures...to ensure that the environment is in an acceptable state. In other words, the costs of these measures should be reflected in the costs of goods and services which cause pollution." The oecd recommendation was never formally ratified by any state and hardly any member country brought out comprehensive legislation incorporating the polluter pays principle. However, there are stray instances of adherence to the spirit of these principles. In the us, for example, a few provisions of the Clean Air Act, 1970, the Clean Water Act, 1977 and the Compensation and Liability Act, 1980 impose costs on polluters.

In the Vellore citizens' forum case, the sc elaborated the polluter pays principle: "The absolute liability for harm to the environment extends not only to compensate the victims of pollution but also the cost of remedying environmental degradation. Remediation of the damaged environment is part of sustainable development and as such, the polluter is liable to pay the cost to the individual sufferers as well as the cost of reversing damaged ecology."

The polluter pays principle is thus based on the premise that neither the government nor the society at large should subsidise pollution and polluters. But then who is the polluter? One school of thought lays the blame squarely on producers. But another school of thought contends that it is not correct to regard only the manufacturers as polluters; they point out that consumers are the ultimate polluters and argue that the offending product would not have been manufactured if there had been no demand for it. This view has, however, not found favour from governments or even industries worldwide -- for obvious political reasons.

The second aspect of the polluter pays principle is: what should the polluter pay for? The sc judgment -- as well as jurisprudence from other parts of the world -- is quite clear on this; the polluters must pay for two costs. They are: the cost of restoring the environment and the cost of compensating victims of pollution. There is also agreement over the view that in case of aggregate pollution -- one caused by large number of polluters -- the cess must be divided equally among the offenders and paid to the government. This is because the harm caused by aggregate pollution is over the long-term and it is difficult to identify individual victims. Recently, another school of thought has emerged; this holds that people must pay for using the environment -- a kind of user charge. However, this does not strictly fall within the polluter pays principle. Both polluters and non-polluters use the environment. Why should the latter pay up?


This is an mbi that is fast becoming very popular. These instruments received a big fillip after receiving sanction of the Kyoto Protocol. Under a tradable pollution allowance regime, the government issues 'allowances' that authorise the holders to emit a certain amount of effluents over a given time. The regime follows three steps. First, the government determines emission standards of particular pollutants and the extent of pollution over a given geographical area. It then assigns 'allowances'. This is done by breaking up the total estimated pollution into a number of permits. The precise rights that go along with each permit are then determined. The final step is auctioning off these permits.

A slight variation of emission trading is the carp and trade approach, where the government sets a baseline level for pollution by each source. An industry -- or a manufacturer -- obtains emission reduction credits (ercs) by keeping emissions below baseline levels. This manufacturer is then free to sell off these erc s to others -- who might not actually comply with the standards but can atone by buying these credits.


But how does emissions trading conform to the pollute-pays principle? Let us consider a hypothetical situation. Aseem, the owner of a polluting plant, has to pay us $10,000 to bring his unit in compliance with the government's emission limits. But he can also purchase allowances worth us $2,000, which allow his plant to remain in operation without having to reduce its emissions. Aseem buys the allowances from Salma -- another plant owner -- who has managed to reduce emissions far below the required level to allow her to sell off us $2,000 worth of allowances. Salma had to spend us $500 to comply with the government's norms. But by spending another us $500, she can lower the pollution level of her unit to an extent that she can then sell of her pollution control allowances at us $2,000. W ithout the benefit of such trade, A seem and Salma must make a combined expenditure of us $10,500 to reduce pollution in their units . B ut now both the players end up spending a substantially less us $3,000. Aseem has paid for his unit's culpability in pollution. At the same time, the net pollution by both Salma and Aseem's unit does not exceed the norms. But what if they do? So, regulators must step in to ensure that emissions trading do not betray their real purpose


However, all is not hunky-dory. Emission norms are region-specific. Implicit in this is the assumption that a pollutant has same effects throughout the region. But this is not always so. The same amount of pollutants from Salma's and Aseem's unit can have radically different effects on their respective environments. In that case. the trading would betray the spirit of the polluter pays principles. So, policy-makers and regulators must take care of such nuances to ensure that mbis attain their real objective.

Pankaj Singh and Dharamveer Singh are at the National Law Institute, Bhopal