The consciousness of being urban is all powerful today. What will it lead to? 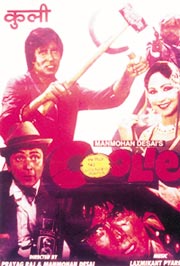 "...the medium of film. Of course, as a cultural product is not rooted in the villages; it is clearly an urban phenomenon. In the popular Hindi film, village life is depicted as the world 'outside' or the world where 'our roots lie'. But this is an urban reflection. It does not reproduce the villagers' needs, neither emotional nor aesthetic. For them, the medium of film represents the 'outside world' which has no relationship to their own social and psychic world."

Migrants have occupied centrestage in popular Indian cinema from its early days. From Balraj Sahni in Do Bigha Zameen, to Amrish Puri in Dilwale Dulhaniya Le Jayenge. But the division of the B grade rural market and the upmarket multiplex is ominous. Earlier, the same films were seen across the country. "When I came to the film industry in the late 1960s, the mantra was that a film would be successful if it did well in the small towns. That's where the money was. The big cities didn't matter," says Javed Akhtar, poet, writer and lyricist of numerous films. "Today's films are mostly set in a Neverland or the Underworld. This train has no other stations. The big producers think only of the upper middle class and NRIs. These people don't want to see that which pricks their conscience." This demand for the consumption of urban culture is rising fast in the villages, a trend that satellite television is encouraging. Major directors acknowledge the TV as a very important marketing tool for the villages, and say that they do not feel it competes at all with cinema.

So, what is the socio-political significance of this class-based cultural breakdown? Sociologist Ashis Nandy uses the example of the West, which has two types of culture: the classical and popular. India, however, has a third category: the folk, he says. "Culture assumes a certain rootedness in the folk. But the folk culture we see in popular films is severed from its sense of community. So what is happening in India is that the folk culture is receding into the popular culture."

What does this mean in terms of economics? "Well, larger markets. More homogenisation. Siphoning of folk talent and resources to popular forms." And what does it mean in terms of politics? "This means more political inter-linking and the assimilation. Those on the peripheries of society will become more accessible to city dwellers. So, a political whizkid sitting in the Delhi party office with a cell-phone and a laptop computer will be able to control things in a faraway place. Centralised campaigns of politics and marketing would be more successful." Can India take in rapid urbanisation of this kind? How will such a large population urbanise so rapidly? Aren't we looking at more slums in Indian towns and cities?

"The dominant view of slums is that of the middle class, which sees them as a problem. Slums of developing countries are not the same as those in industrialised countries -- they are interesting places where the underclass can dissent with the middle class. Cities have gained immensely from slums, from their sense of defiance of the dominant culture, from their sense of community." Nandy says a poor migrant can find shelter only in the slum, not the organised parts of the city.