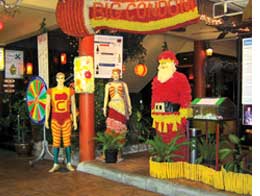 Pa, a 45-year-old woman from Bang Khen district in Bangkok, works with a massage parlour in Cabbages and Condoms, an upmarket restaurant in Bangkok. Pa is hiv positive. This drastically limits her livelihood options, made worse because banks don't usually give them loans. But Pa is one of the beneficiaries of positive partnership programme of the Population and Community Development Association, called the pda, in Bangkok.

With an initial loan of us $300 from the pda, she now earns 4,500 baht (about us $135) every month. The business has helped her save enough to invest in a snack shop where she works during the day.The group of 10 people in the massage parlour contributed 6,000 baht (about us $180) each for this venture.

The pda rules ensure that the other partner in the programme has to be an hiv negative individual. "The project provides opportunities for people with hiv/aids to work with partners who are not hiv positive. This increases the former's acceptability in the society," says Kannikar Kijtiwatchakul, who is with Medecins sans Frontieres (msf) Belgium, Thailand Mission.

The partnership project benefits 900 pairs all over Thailand. Buying, selling and cattle rearing are the most common partnerships. Agriculture, bike repairing, silkworm growing, cloth making and mushroom farming are also taken up. Between 2004 and 2006, loans worth 16.2 million baht (us $484,304) were given out and the recovery rates were 91 per cent. pda also trains people on ways of running the business. 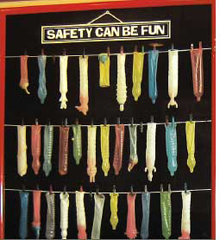 To fund such programmes, pda runs a variety of initiatives such as the restaurant Cabbages and Condoms. Cabbages are a cultural symbol in the country and the idea behind the name was to make condoms as common as cabbages there. It brings in about 300,000 baht (about us $9,000) everyday. There are currently 12 restaurants in Thailand. The chain has gone abroad to Japan with one restaurant in Osaka; a second one is being planned for Tokyo. Money also comes in from its eight resorts, five clinics and 11 handicraft shops. The money earned from these ventures provides for around 70 per cent of the money (about 200 million baht per year) required for its philanthropic activities. The organization spends 200 million baht (around us $5.9 million) every year.


pda came into existence in 1970 and has been a part of the country's family planning programme ever since. It developed a system to distribute condoms and contraceptives through varied sources, from nurses to shopkeepers. It did this at a point when it was illegal for anyone but the doctor to prescribe birth control pills. The annual population growth rate fell from 3.3 per cent in the 1970s to 0.8 per cent in 2002. The number of children per family fell from 7 to 1.6. The pda then decided to tackle the growing hiv/aids cases in the country. It is widely acknowledged that the pda, through education and prevention programmes, has saved millions of lives.

Other pda initiatives include programmes on nutrition and sanitation. In its Thai Business Initiative in Rural Development project, the pda partners with a village and one of the 80 companies involved with the project. The idea is to ensure that people do not migrate to find work. There have been problems too. pda promoted Monsanto's patented seeds in villages. The programme was suspended after there was public outcry against the controversial seeds.

"pda also plans to work on diabetes and cardiac problems. We are also promoting income generation among the elderly where the older person can partner with a younger person in the family and apply for loans," says Praween Payapvipapong, vice president, pda.