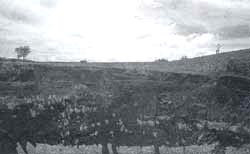 TUCKED away in tehsil Ambajogai of Beed district in Maharashtra, water shortage forced the inhabitants of the tiny village of Manganwadi to migrate every year for six months to Pune, about 250 km away, to eke out one square meat a day. "We would lock the whole village and go," says Bhularao Kundakar, a marginal farmer with a mere 0.6 ha field. But all that is history now. The mass exodus has met its end. A micro-watershed development project, introduced in the village by an NGO, the Marathwada Navnirman Lokayat (Manavlok),,has totally changed the lives of Kundakar and his fellow villagers. "Nobody leaves the village today to work outside, as we now produce enough foodgrain and get not just one but two crops a year," says Ganesh Devekare, another villager.

A watershed is an area with an uniform drainage pattern. In other words, the land area from which the water drains into a given section of a river is the watershed, relative to that section of the river. Depending on the length of the section, it could be as large as the entire Indo-Gangetic plain or as small as a village. Selecting a watershed as a unit assures the sustainable development of the area by empowering people at the local level to manage their own resources.

The Maharashtra government laun c*hed its Comprehensive Watershed Development Programme (COWDEP) in 1983 for an integrated development of the drought-prone areas of the state. But a variety of reasons led to the government's relative failure with the programme and consequently, COWDEP could not contain the heavy migration of people to other towns and even to the neighbouring states.

Ambajogai block in Beed, with a hilly terrain and an annual rainfall of only 630 mm, where 95 per cent farmers produced just one crop a year, was the ideal launching pad for the project. The target was a three-tier water harvesting' system, envisaged to double the current percolation rate of about 15 per cent. The highest point, which is most susceptible to erosion, is planted with trees. Grass is grown to arrest further erosion. The intermediate stretches house physical structures like contour bunds and earthen stone bundings to obstruct free- flowing rainwater. At the very bottom, water harvesting devices like check dams, overflows and farm ponds have been constructed. The water accumulating structures, usually community wells, complete the picture. The use of locally available materials has brought down the cost of the check dam by 40 per cent when compared to the government project.

In Beed district, these micro'-watershed projects have effectively utilised rainwater resulting in an increased yield of kharif crops. About 8,000 ha in its project area today boast of a hitherto unraised second rabi crop. It has successfully reclaimed about 1,000 ha of wasteland too. "We can turn this area into the food basket of Marathwada, if every farmer adopts these micro-watersheds," says Chintamani Kulkarni, sarpanch (village headperson) of Yelda village. Along with higher crop yield, fuel and fodder availability has also been taken care of.

The people of Beed have actively participated in this movement through the network of krishak panchayats (farmers' fora). Any farmer, small or marginal, can voluntarily join the krishak panchayat in his village. The panchayat elects its own office bearers and fixes its own agenda, meeting at least once a month. It undertakes the responsibility for coordinating and monitoring watershed development and other programmes sponsored by Manavlok.

The villagers have learned how to manage these projects. "We know how to measure total land required for the project, depth of the check dam, its height, length of contour bunds and also the amount and direction of the flow of rainwater," beams Shrirang Bobade, president, krishak panchayat, Bobewadi village.

"Regular monitoring of these projects by Manavlok and krishak panchayat members has revealed that the rate of percolation has increased from 15 to 25 per cent, resulting in an increased availability of water to the fields," claims D S Lohia, secretary, Manavlok.

But this was not sufficient for achieving a higher yield "Hence, krishak panchayats decided to provide interest-free loans to their members to purchase quality seed and fertiliser," says Balbhim Karhar, president of the krishak panchayat in Year. Given for a period of six months at the beginning of each harvesting season, the loaning scheme has reported a 100 per cent rate of recovery. "Members are aware that it is their own money and know that only its timely return ensures the smooth functioning of the panchayat," says Govind Devgate, the panchayat's secretary.


But these projects are not an end in themselves. "To achieve sustainable development in the villages we need to raise the incomes of the villagers, in particular that of the women," says Lohia. Women organised through the Bhoomi Kanya Mandal (BKM) carry out many income generation activities to attain self-sufficiency. In Kuranwadi village, a group of 11 women are running a poultry farm for which Rs 22,000 was provided as an interest-free loan by Manavlok in 1992. "Not only have we returned the loan, we have also earned an equal amount by selling 500 birds," says Premkala Kotlapure, president, BKM.

Even though several problems like those of the three FS (food, fuel and-fodder) have reduced the dependency of people on the rain god, the people's reliance on the NGO itself has not been reduced. Although Lohia assures that the organisation would gradually withdraw from the areas under the project as they become self-dependent, the villages are not yet ready to manage on their own. Bhavthana, where Manavlok started its activities in 1982, for example, is far from achieving self- dependency in the near future. "We do need someone's support to initiate watershed development. We cannot do it ourselves," says Vishnu Jadav, president, krishak panchayat, Bhavthana. Echoes Hariban Rathore, sarpanch, Rajwadi village, "We still need Manavlok for financial, technical and logistic support." The locals need this support for the routine maintenance of projects too.

Fundamentally, it is the uninterrupted supply of money needed for the smooth functioning of the project that has become the main reason for the growing dependency of these rural folk on the NGO. In the summer of 1995, a watershed project in Sabla village was developed. Aimed at irrigating about 20 ha, the project comprised a check dam, farm land and an overflow, costing about Rs 98,000. The villagers had to pay just a token sum ranging from Rs 25 to Rs 250 per ha, depending on each farmer's level of income. The labour for the project was not voluntary but paid for. The generous financial cushion offered by the NGO makes even krishak panchayats like the one in Bhavthana, having Rs 25,000 in its kitty, unwilling to take up a project on their own.