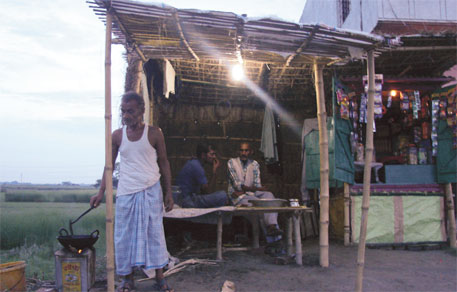 It is 10 pm. Too late in the night by village standards. But the four ben¬ches around Mote Singh’s tea stall are occupied. People are chatting while sipping tea. More than a year ago, the stall in Sahe¬bg¬anj village of Bihar’s Muzaf¬fa¬rpur distr¬ict used to be empty by 6 pm. Singh’s fortune has been illuminated by a 15 Watt CFL. The village has an electricity grid but supply is negligible. “Till mid-2011, I used to close my stall by sunset. Managing with kerosene lamp was expensive,” says Singh, the sole earner of a fa¬mily of five, who used kerosene to light his house. Kerosene costs him Rs 250 a month.

In June last year, life changed for many in Sahebganj as they started getting electricity every day from 6 pm to 12 pm. The residents thank Husk Power Systems (HPS), a company in Patna, that has installed two off-grid biomass gasification plants with 32 KW capacity each in the village. These plants convert solid biomass into gas which is then used to generate electricity (see ‘How biomass gasification works’). Each plant uses 300 kg of rice husk every day to power 40 per cent of the ho¬useholds in Sahebganj. HPS monthly charges Rs 50 per household for a 15 Watt connection for six hours a day. Money is collected in adv¬ance to avoid defaulters. Plant operators say village resi¬dents essentially require power for six hours. HPS has set up 80 such plants of varying capacities across Bihar.

When small is better, almost

With big grid-connected biomass plants failing across the country, the Ministry of New and Renewable Energy (MNRE) is pushing for small off-grid plants. “They need less biomass and villages prefer selling biomass to the developers because they get electricity. Transmission and distribution losses also reduce,” says D K Khare, director of biomass gasification, MNRE.

Although most experts hail the HPS model, there are a few critics. Sunil Dhingra, sen¬i¬or fellow at Delhi NGO The Ene¬rgy and Resource Institute, says developers are charging unreasonably due to unregulated tariff for off-grid energy solutions. HPS charges Rs 18.51 per unit, while an average consumer pays Rs 4 per unit for conventional energy.

“States should decide on a reasonable tariff and some of it should be subsidised,” suggests Dhingra. For instance, if the government decides Rs 10 per unit as tariff and the cost of generation is Rs 13, then the balance (Rs 3) should be subsidised, he says. Ratnesh Yadav, co-founder of HPS, clarifies that if a developer charges an exo¬rbitant amount the public will not pay.

“We operate in a market where the moment we charge irrationally someone will replace us,” he adds. Residents of Sahebganj are happy with the tariff they are paying. “It is cheaper than kerosene and die¬sel,” says Sohan Ram, who has taken a 30 Watt connection. For diesel operated energy, a 15 Watt connection costs Rs 100 for four hours.

Despite large-scale availability of biomass and the subsidies provided by MNRE, the power developers are charging more tariff, says Dhingra. The ministry gives Rs 15,000 per KW and Rs 1 lakh per km for a transmission line of up to 3 km. Going by this, if HPS—which says its 32 KW plant costs Rs 18 lakh—avails the maximum subsidy, then 45 per cent of its cost would be subsidised.

The developer differs. “It costs me Rs 7 for generating a unit of power,” says Yadav. Com¬paring off-grid renewable energy solutions with grid-connected conventional power to calculate per unit cost is irrational, he adds. “Our tariff is inclusive of transmission and service cost, which is not present in grid-connected power. The latter is hugely subsidised by the government to take the burden off the consumer.”

Greenpeace India, which advocates the HPS model, proposes an alternative for tariff regulation: the government should set up small distribution networks (mini-grids) in villages. “It can enter into a power purchase agreement with the developer to buy power at a preferential tariff from the developer and collect the standard tariff amount from the consumer,” says Manish Ram, renewable energy analyst, Greenpeace India. Suppose, the government is buying power at Rs 10 per unit from the developer, it can charge Rs 4 per unit from the consumer and subsidise the rest over a period of time until they eventually reach grid parity (the point at which the cost of renewable energy equals the cost of utility power from conventional sources). Later, the mini grids can be interconnected with the main grid.

But an MNRE official, who wished to remain anonymous, says HPS is charging what people can pay. The debate is useless be¬cause the Electricity Act exe¬mpts developers from taking any licence to provide power in rural areas. “The Act also says the tariff should be decided by the electricity regulatory commission after consultation with the consu¬m¬ers,” says Ashwini Chitnis, senior researcher with NGO Prayas Energy in Pune. The developer should not be given free hand, adds Chitnis. HPS says it cons¬ulted with Sahebganj residents before deciding the Rs 50 tariff. Decentralised distribution guidelines of the Ministry of Po¬w¬er say that tariff in an off-grid village sho¬uld not be more than the ta¬riff in the neighbouring grid-connected village.

Ram, along with rest of the residents of Sahebganj, says he would prefer uninterrupted full-day supply of electricity, if tariff is reasonable. But developers say 24-hour supply would increase generation cost which will have to be passed on to the consumer. “If a developer runs the plant for the whole day, an optimum load needs to be maintained. If tariff increases, people may reduce power consumption to save cost. The unused power is a cost to the developer,” says H S Mukunda, senior scientist at the Indian Institute of Science in Bengaluru. To ma¬tch the extra load, small industries can be set up in a cluster of villages, he adds. The dev¬eloper may then charge higher tariff from the industry and lower tariff from domestic users. “Such an experiment is yet to happen,” says Sangeeta Kohli, professor at IIT-Delhi, who has worked as a consultant with biomass power developers.

Last year, the World Bank published a report on the status of MNRE’s Village Energy Security Programme (VESP) under which off-grid biomass plants were set up across the country. The report, India: Biomass for Sustainable Development, said that since 2005, when VESP started, only 45 of the proposed 95 projects have been commissioned. Most of the commissioned projects were closed for long periods because of poor aftersale service. Other reasons include inadequate training and lack of interest among people in operating the plant and supplying biomass due to absence of incentives. The programme was discontinued in 2009. N P Singh, director of biomass, MNRE, says community-based projects fail because villages do not take responsibility. “They want the government to perform all tasks,” he adds.

Kohli of IIT says to increase acceptance among people for off-grid energy solutions, employment generation is the way to go. Yadav of HPS agrees. He says, “We have employed women to make incense sticks out of char, a by-product of biomass gasification.” Of the total biomass used in a gasifier, 40 per cent converts into char.

A major problem in the gasification process of biomass is the production of tar and wastewater. The gasifier runs best on woody biomass because light biomass, like rice husk which is used in most plants in Bihar, can choke the reactor where combustion takes place. Rice husk has the highest content of ash (20 per cent) among all the agricultural residues of the gasification process. If this husk is burnt at the regular temperature of 1000°C in the gasifier, the ash will produce clinkers that will jam the reactor. To avoid clinkers, temperature needs to be lowered at 850°C, but this drop in temperature results in more tar. 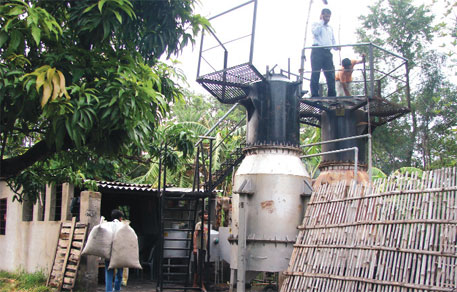 To reduce tar, briquetting technology has to be used. “If husk is made into briquettes of appropriate size, say 5 cm by 5 cm, it will reduce the surface area of biomass which is inversely proportion to tar production,” explains Mukunda of the Indian Institute of Science. Briquettes also increase the density of husk, facilitating its flow inside the reactor. In its original form, husk gets stuck inside the reactor. Despite the positives, developers stay away from briquetting machines because they increase operation cost by 30 per cent. Yadav of HPS says, “We clean our system regularly and mix the tar with char.”

Inside the gasifier, water is used to clean the gas of impurities by cooling. Impurities either condense or get dissolved in water. This water can be used for a month in the system, after which it becomes saturated with impurities. “It needs to be treated before letting it out of the system,” says Mukunda. With no checks in place, plants often avoid it.

At present, there are no standards for gasifiers, which affect their efficiency. “Bureau of Indian Standards is working on them,” informs Khare. For HPS, efficiency of the gasifiers is not a priority. Most of the existing plants are based on the basic technology with efficiency of 65 per cent. “Technology with up to 85 per cent efficiency is costly and requires skilled and expensive manpower,” says Yadav. A 35 KW plant with 85 per cent efficiency would cost Rs 30 lakh. “Our priority is to give employment to village residents, who may not be able to operate plants based on a sophisticated technology,” he adds. Yadav’s plant directly employs four people in a village of more than 1,000. “People can be trained to run a sophisticated system,” contends Mukunda.

Sophisticated technology like fluidised bed biomass gasification system, where air carries biomass in the gasifier, is yet to be successfully experimented. This system is used in coal-fired power plants. In conventional plants, biomass has to be manually churned to avoid choking of the reactor. As a demonstration project, MNRE is supporting a memorandum of understanding (MoU) between Ruchi Soya Industries Ltd and Thermax Ltd to set up a 1 MW fluidised bed biomass gasification system in Mahar¬ashtra. The MoU claims the system will be 95 per cent efficient. Mukunda doubts this figure. “Fluidised systems produce 20-50 per cent more tar,” he adds. But Thermax stands by the system’s efficiency. “We have the technology to reduce and manage tar,” says R R Sonde, executive vice-president of Thermax.