Proliferating grassroots level activity in Orissa is empowering villagers, taking them closer to a fairytale end to unending tales of poverty and exploitation 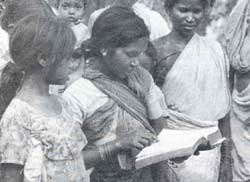 The hatchery must go. The decision was unanimous and it bound together the 100 odd fisherfolk -- men and women -- with a common purpose. They had gathered under the red tiled roof of the New Baxipalli Mahila Sangho in Gopalpur-On-Sea, about 100 km from Orissa's capital, Bhuvaneshwar. The mid-March heat matched their ire against the Deepson Hatchery, which was defying the Orissa government's orders for closing 4 hatcheries and suspending work on 8 others. The hatchery was "poisoning" the sea.

This stridency in peoples action is just one example of the rapid growth of the grassroots movement in Orissa, which is fast changing things here. The women of Suguba village of Gajapati district, for example, are struggling to improve living standards through community action. Although cattle is an individual's property, in this village of Shabar tribals, each family, by turn, takes the cattle out to graze. Today, the village has 52 cattleheads, each family owning at least 1 goat.

The people of Bettigonda, another village in Gajapati district, had to walk 20 km to catch a bus from the nearest roadway. "In January 1994 the mahila and gram sanghos of our village issued an ultimatum to the bdo to release funds for road construction," informs Prashant Manjhi, the samiti secretary. In March they gheraoed the bdo. Today an asphalt road links Bettigonda and 5 other villages to the Panigonda panchayat.
Till about 15 years ago, though, all this would have been unthinkable. But around that time, the People's Rural Education Movement (prem), a Berhampur-based NGO, started organising the villagers. Says Jacob Thundyil, president of prem , "Over the years we have turned the odds a little in favour of the poor and the powerless." Today there exists a network, linking organisations from the village levels to the state level. They operate like parallel centres of people's power.

The movement operates through a hierarchy of samities. At the village level are 2 committees: the gram sangho (the village committee), with 1 male member from each household, and the mahila sangho (women's committee), with 1 woman from each family. These sanghos elect their own presidents, secretaries and treasurers. Meetings are held once a month to discuss and solve the problems.

The village of Kharikua, a cluster of 25 Saura tribal households, opted for agro-forestry 3 years ago. Perched on a plateau, the village has little agricultural land and the villagers practiced bagada chasha, or shifting cultivation. "We realised that it was doing us no good. With the forest cover shrinking fast, and the continuing harassment by the forest officials, we thought of planting trees that would yield fruits as well as fuelwood," says Premika Shabar, secretary of the mahila sangho. The village has 12 ha of land. The villagers now grow pineapple, mango, lemon, acacia, teak and bamboo. Niranjani Shabar's fruits from her 0.4 ha land sold last season for Rs 3,000 in the Mahana market, 10 km away.

Barring programmes which need supportive finance, the village level organisations enjoy a measure of autonomy in deciding upon their programmes. They also take up issues at the panchayat or block level. The mahila sanghos of 5 villages of the Ratnagiri-Udyagiri block wanted the government's food-for-child scheme extended to their villages, but their sarpanch (village headman) did nothing. It was only when the blpo, Janashakti, took up the issue, that the scheme could be realised.

Last year the mahila sangho of Aliganda village decided to wipe the area clean of liquour. The villagers vowed not to drink or sell liquor. The women picketed the liquor dens. But the powerful liquor lobby, with its political backing, was adamant. In December last year the women took out a rally, and young Ireni, a mother of 4, died when the liquour goons opened fire. But today her sacrifice has seen the shops finally closed.

The social profile is changing fast due to ngo activity. In the 261 villages of Mohana block, the bgks has achieved a literacy rate close to 65 per cent. The Pindiki panchayat samiti has invested Rs 10 lakhs during the last 3 years in various developmental activities in its 47 villages.

In 1993, prem decided to make 34 blpos independent in all respects. "It was done to give them freedom, which is essential for an organisation's self-development," says Thundyil. It, however, continues to extend them the much needed technical and financial support.

But the leaders soon realised that people's initiative, bereft of political backing, can achieve little. It was essential to get into politics to effectively fight vested interests. "We decided to participate in the panchayat elections in May 1992," says Sadhana Singh of the Panigonda panchayat. Sixty five out of the 82 candidates, who contested as independents on the platform of the Orissa Agrarian Workers Union, won their seats.

Over the past 3 years, these elected members have tilted the scale a little in favour of the common folk. Rupees 16 crores have been pumped into village development from government funds which were lying idle, and the problem-ridden Jawahar Rozgar Yojana is now being implemented smoothly by the village level organisations.