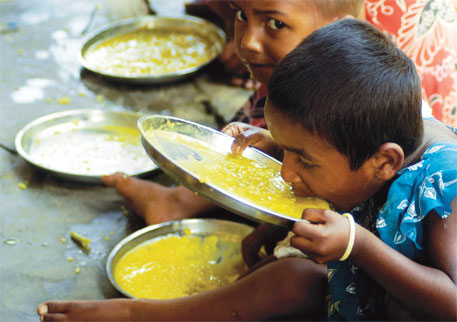 GLOBAL CHRONIC hunger has declined significantly despite sharp increases in the prices of primary food products since 2008. Price hikes have limited effect on consumers, states Food and Agriculture Organization (FAO), in the report, The State of Food Insecurity in the World.

According to FAO, chronic hunger is when a person does not regularly get enough food to lead an active life.

The report, released on October 1, this year, contradicts its own Food Price Index (FPI) report of 2009-2011 which predicted that large swings in primary food product prices that take place due to short-term changes in economic environment, would severely affect food security of the poor and break the declining trend of global chronic hunger. 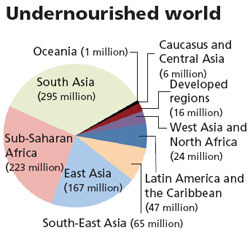 The new report, which FAO prepared with the help of the International Fund for Agricultural Development (IFAD) and the World Food Programme (WFP), states that when prices rise people tend to shift to cheaper and less nutritious foods rather than going hungry. This increases the risk of micronutrient deficiencies and foments malnutrition which can have long-term effects on people’s health.

The report, thus, considers hunger synonymous with undernourishment and states that despite a decline millions are still chronically hungry across the globe. In 2011-13, one in every eight persons suffers from chronic hunger. In the same period, as many as 842 million people in developing regions suffered from chronic hunger, down from 868 million in 2010-12. Compared to this, 15.7 million chronically hungry people live in developed countries.

In 1996, WFP had targeted to halve the number of chronically hungry people in developing regions to 498 million by 2015. It looked like a distant dream, but 18 countries achieved the goal in 2012. Most of these countries were from Central Asia, Latin America, Southeast Asia, Africa (Ghana) and North America (Cuba).

In 1990-92, UN’s Millennium Development Goal-1 (MDG-1) had aimed to reduce the number of chronically hungry people in developing regions from 24 per cent to 12 per cent by 2015. The present trend indicates that prevalence of undernourishment in developing regions would be 13 per cent, marginally above the MDG target (see ‘Trend of hunger decline’). 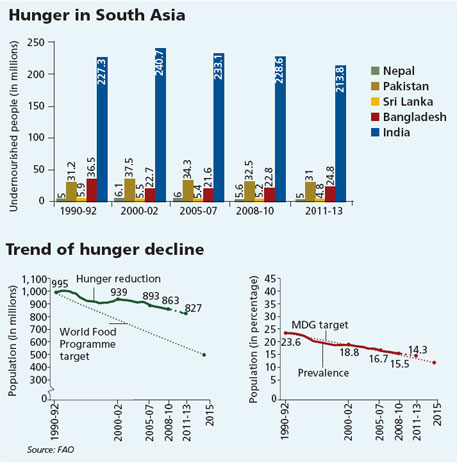 With the target year close by, the report stresses the need to initiate programmes that would deliver fast results. Besides measures to improve access to food through safety nets, it also talks about the need for cash transfers and cash-and-voucher schemes to raise local demand for food, which would stimulate production.

The three organisations have urged countries “to make considerable and immediate additional efforts” to meet the MDG and WFP targets. “With a final push in the next couple of years, we can still reach the MDG target,” write heads of FAO, IFAD and WFP, José Graziano da Silva, Kanayo F Nwanze and Ertharin Cousin respectively, in their foreword to the report.

They have also called for nutrition-sensitive interventions in agriculture and food systems as a whole, and in public health and education, especially for women. “Policies aimed at enhancing agricultural productivity and increasing food availability, especially when smallholders are targeted, can achieve hunger reduction even where poverty is widespread. When they are combined with social protection and other measures that increase the incomes of poor families, they can have an even more positive effect and spur rural development, by creating vibrant markets and employment opportunities, resulting in equitable economic growth,” they said.

Regional disparities persist in hunger reduction despite significant progress the world over. In the past few years, Sub-Saharan Africa has made very little progress and remains the region with highest prevalence of undernourishment with one in four people estimated to be chronically hungry.

No recent progress has been seen in Western Asia, while South Asia and North Africa witnessed slow change. More substantial reductions in the number of hungry and prevalence of undernourishment have occurred in most countries of East Asia, Southeastern Asia and Latin America.

Progress in South Asia is slow compared to other Asian regions such as Caucasus, Central Asia, Eastern Asia and Southeastern Asia. West Asia is the only region where the number and percentage of the undernourished has increased.

India has shown very slow progress compared to Bangladesh and Sri Lanka while the degree of chronic hunger has almost ceased to fall in Pakistan and Nepal (see ‘Hunger in South Asia’).

In the past few years, high economic growth has held key to hunger reduction. The report states that improvement in communication has helped overcome traditional infrastructural constraints and promoted market integration. Agricultural productivity has also increased due to higher public and private investments. In some countries, remittance inflow played a crucial role in spurring domestic growth.

The report calls for special schemes for the poor so that they share fruits of the growth. Specific policies targeting the poor, especially in rural areas, are needed. “In poor countries, hunger and poverty reduction will only be achieved with growth that is not only sustained, but also broadly shared,” it says.