Will the inclusion of Hepatitis B vaccination in the Universal Immunisation Programme help? 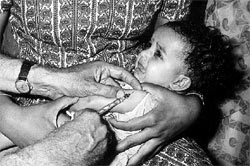 Starting September 2002, about two million children would be vaccinated free of cost against Hepatitis b in 15 cities and 32 districts in the country. The move follows the inclusion of the vaccination in the Universal Immunisation Programme (uip) by the Ministry of Health and Family Welfare (mhfw), which took five years to finally arrive at a decision on the controversial issue.

Controversial because some experts, including the majority of doctors, strongly feel that the programme is not well thought out. They go so far as to predict no reduction in the prevalence of Hepatitis b in the country because 40 million people are already chronically affected (see box: Killer on the prowl ). Others argue that the inclusion of the vaccine in uip is a shade presumptuous, considering the fact that India is still grappling with a host of other diseases like polio, diphtheria, tetanus and measles.

Another debatable aspect is the identification of people who are likely to contract the disease. As the task is very difficult, experts like Ajay Gambhir, secretary, Indian Academy of Paediatrics (iap), Delhi chapter, recommend "overall vaccination starting with infants and high-risk groups such as doctors and people receiving blood transfusions". However, since this entails huge expenditure, others prefer to opt for a more rational approach that focuses solely on susceptible groups.

But that's not all. There are more equally contentious issues that plague the programme.
"To begin with, the faulty protocol being followed," avers Gambhir. Ideally, every child should be vaccinated within the first 24 hours of birth to protect it from transmission of hepatitis from the mother and future infections. This procedure, when incorporated in Taiwan, reduced disease prevalence from 15 per cent to 0.9 per cent in a span of 15 years.

Unfortunately, in India most births are not monitored by trained personnel. So an infant will end up getting the first dose of the vaccine only when it is six weeks old and due for the dpt (diphtheria, pertussis and tetanus) shot. "Consequently, one out of three babies ends up getting infected," laments S K Sarin, president, Indian Association for Study of Liver (inasl), New Delhi. In response, all that S Malhotra, assistant commissioner, mhfw, can promise is that "a more effective protocol might be incorporated at a later stage".

On the implementation front, too, the slackness is evident. How else does one explain the fact that even though the World Health Organisation (who) recommended the move way back in 1987, it is only now that the government has taken steps to initiate the vaccination programme?

The current programme is being initiated courtesy the us $4.1 million being given by the Global Alliance for Vaccines and Immunisation (gavi) -- a coalition of organisations such as who, United Nations Children's Fund (unicef), Bill and Melinda Gates Foundation and the World Bank group -- through the Vaccine Fund. To expand the scheme, however, the government will have to generate its own money.

"Vaccinating the whole country would require around Rs 250 crore," points out Sarin, and Prime Minister Atal Bihari Vajpayee has promised to earmark the required sum in the 10th five-year plan. But people like Sangeeta Sharma, technical coordinator, Delhi Society for Promotion of Rational Use of Drugs (a programme initiated by the Delhi government) feel that the "cost involved doesn't justify the move". Elaborates Mira Shiva of the Voluntary Health Association of India, a Delhi-based non-governmental organisation (ngo): "How can this vaccine be a priority when we haven't been able to provide even basic healthcare services?"

Then arises the problem of inadequate information (like population-based epidemiological data), which has intensified the general confusion on the prevalence of Hepatitis b in India. Most of the studies conducted are so group-specific -- blood donors, pregnant mothers, etc -- that their conclusions are rendered non-representative of the whole population.

While a Union ministry document estimates the prevalence of Hepatitis b to be between 2-10 per cent, an evaluation of the available data by the department of paediatrics and the centre for community medicine at the All India Institute of Medical Sciences (aiims) puts it at around 1-2 per cent.

"To make the Hepatitis b vaccination programme a success, coverage of at least 80 per cent is a must," according to S K Acharya, professor, department of gastroenterology, aiims. To achieve this, "the existing infrastructure will be amended on the basis of the conclusions drawn from the pilot project", says Madhu Krishna, programme coordinator (children's vaccine programme) Indian wing of the Program for Appropriate Technology in Health (path), a global ngo. The ground reality is that less than 50 per cent of the target population has actually been vaccinated under the current uip. However, not everyone is complaining about the inclusion of the vaccine in the programme.


Pharmaceutical companies, for instance, are gushing over the inclusion of the Hepatitis b vaccine in uip as it has given indigenous producers a major fillip. Rajesh Jain, director of Panacea Biotech, one of the firms providing the vaccine in the Indian market, predicts "that the consumption will go up to 100 million doses per year". Backing Jain's forecast is the Confederation of Indian Industry (cii), which estimates a three-fold increase in the use of this vaccine between 2000 and 2005, making it the only vaccine showing a substantial rise in sales.

"The current market size is about Rs 140 crore, with Indian companies having a share of more than 50 per cent," reveals Ranajit Sen, advisor, strategic planning at Shantha Biotechnics Private Limited. The Hyderabad-based company has received a who certification to supply the vaccine -- Shanvac b -- to un-run programmes at a reduced rate. Pune-based Serum Institute of India has also slashed the price of Hepatitis b vaccines by 40 per cent.

On the other hand, multinationals such as GlaxoSmithKline (gsk), which was the first company to introduce the vaccine in the country, have been hit by the steep reduction in prices. According to gsk's annual report, the entry of Shanvac b, which does not infringe on any patents, has led to a net reduction in the sales of the company's vaccine.

"To counter this, gsk has now started promoting its combined dpt and Hepatitis b vaccine. It is, in fact, lobbying with the government to use it in the programme," claims Sen. Refuting this charge, a gsk official in Delhi clarified that the company routes its proposals through the proper channels and does not have any direct interaction with the government.

Though the government seems inclined to use the combined version since it would be convenient to administer, mhfw's Malhotra is hopeful that an indigenous variant will be developed soon.

Even though government officials reiterate that providing better healthcare is the sole aim of the endeavour, vaccine manufacturers and the us government have in the past been implicated for pushing vaccines to increase sales. Pharmaceutical companies have also been blamed for trying to increase sales by creating hype about the disease. According to Scott Wittet, director, advocacy, communication and training, path, usa, "This trend becomes obvious when companies try to vaccinate everyone, including adults in the low-risk category, regardless of the need." Moreover, "as decisions about the vaccines are taken by a few individuals in the government, it is easier for pharmaceutical companies to promote their products through them", claims Shiva.

Price wars and industry tactics apart, it remains to be seen whether the government's latest strategy in the battle against the disease proves effective.