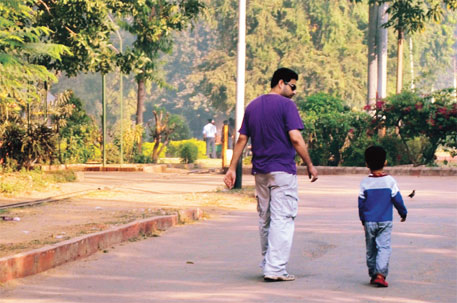 Sayaji Baug garden, a green retreat in the bustling city of Vadodara, has been the talk of the town for the past one month, not for its variety of trees and shrubs, but for a new project that the Vadodara Municipal Corporation (VMC) has taken up on its premises.

A multi-crore-rupee multimedia laser fountain in the park has upset people. Following protests, the corporation stopped work for the time being, but the park’s fate is still undecided.

The 46-hectare park, the largest in western India, was gifted to the people of Vadodara in 1879 by Maharaja Sayaji Rao Gaekwad III. The garden area includes a museum, a planetarium and a zoo. Deepak Mehta, spearheading a campaign against the project, has formed Save Kamati Baug Association. He says, the laser fountain show will invite too many visitors, which will disturb the peace and tranquility of the park.

In a 20-year public-private partnership, VMC and Cube Construction Engineering Ltd are building the laser fountain in 1.21 hectares, between the jogging track and the Vishwamitri river that flows close by. The total project cost is Rs 19.5 crore. Visitors were to be charged Rs 60 per head per show.

Every day about 2,000 people visit the park to walk, jog, play or simply laze around. Residents say they are not opposed to the laser fountain, but to its location. “Sayaji Baug has a huge diversity of plant species, comprising a variety of trees, shrubs, creepers and rare species like the Baroda palm, says M H Mehta, former vice-chancellor of Gujarat Agricultural University.

Several vacant areas in the city can be considered for such projects, but VMC always takes the easy way out, says Cassim M Unia, senate member of Maharaja Sayajirao University. Ajit Singh Gaekwad, engineer with the city traffic management, is concerned about the increased traffic. On a typical evening, all the parking spots remain full. Without any parking plan, the project can cause a nuisance.

Shishir Raval, ecological planner and landscape architect, says the project will adversely affect the ecological, cultural and visual integrity of the park. “Imposing a fee, even if for a laser show, undermines the philosophy of the public space that was intended to be enjoyed by all for free,” he said.

May set a trend

People are concerned about the long-term implications of such a project. More such projects may be taken up for private interests in the name of development of the park, says Sheetal Mehta, a businessperson. He alleges the corporation purposely neglects some parts of the park so that they can be handed over to private parties later and the corporation can financially benefit from it. But according to VMC, such developmental projects are happening in a lot of places in Vadodara. “This is just one of them,” says V R Shikhalia, director of parks and gardens, VMC. Moreover, trees are planted every now and then, which compensates for the cutting down of trees for the project, he says.

But people are adamant that they will not allow any private company to take over Sayaji Baug. “If the municipality cannot fulfil its responsibility of maintaining such an important public space that Vadodara has been proud of for generations, we are willing to take up the challenge,” says Mehta.

The only hope is VMC’s General Development and Control Regulations, which included Sayaji Baug in its list of “heritage precincts” in April this year. This will make the park a preservation area where no development or alteration of landscape will be permitted. “If a developmental activity is deemed necessary, the Vadodara Urban Development Authority will have to consult the Heritage Conservation Committee appointed by the state government,” says Sanjeev Joshi, architect and co-convenor of the Gujarat chapter of Indian National Trust for Art Culture and Heritage.