The government wanted to make India a leading wind power, but it got the details wrong 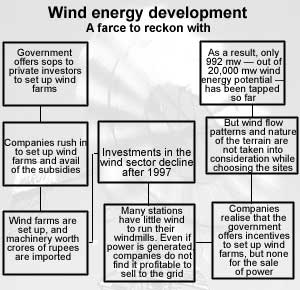 The wind energy sector in India has problems aplenty. There are complaints of wind energy development not yielding proper returns to investors, grid failure and transmission losses, inappropriate sites and machinery and, last but not the least, corruption. At the same time, Western nations, particularly Germany, Spain and Denmark, have a phenomenal success rate in wind energy generation. They score over India both at the policy formation and management levels (see box: Breaking records ).

The reason why India, today, finds it tough to maintain the same pace which it had achieved during 1994-97, is simple. Its overall wind energy programme lacks improved technology and supportive government policies ( see diagram: A farce to reckon with) . The government policies are responsible for the failure of wind farms. "I am not quite clear why the government gives capital subsidy to investors, thereby burdening tax payers," says Kirit Parikh. "For a country of India's dimensions, the first priority should be to come up with a comprehensive national power plan. Sadly, we don't have any such thing, even at the state level. A state-level power plan can take care of more than half our problems," says Suresh of teri.

Says a senior scientist on conditions of anonymity, "The period (1993-97) was big time business for many people." The scientist points out that during 1996, when the hawala racket was making headlines, there were rumours of large-scale corruption in the import of wind machines. There were pointed references to one former minister as well. There were allegations of corruption at the state-level as well. According to senior professionals in the field, in Tamil Nadu, an alleged bribe of Rs 1 lakh had to be paid to top government functionaries for every wind machine installed. Interestingly, wind energy producers are reluctant to talk about the issue, and they vaguely refer to corruption at the "lower end".


In India, the economic size of wind turbines is in the range of 200-500 kilowatt (kw) for grid connected applications. The average capital cost of wind power projects range between Rs 4-5 crore per mw, including local civil and electrical works.

If a lifetime of 20 years is assumed and operation and maintenance costs taken to be 5 per cent, the cost of generation varies from Rs 1.50 to Rs 2.00 per kilowatt hour (kwh) of energy generated. When investors sell the power generated to the grid, they are paid Rs 2.25 per kwh (as in the case of Madhya Pradesh) of energy generated, which they feel is insufficient. Says Sharma of M P Wind Farms, "The state electricity board should purchase electricity generated by wind farms at the same rate as charged by them from consumers, that is Rs 3.50 per unit."

There is no option but to sell power to the grid, and this does not seem to be commercially viable to the private investors. One of the reasons for the decline in the wind installation capacity of these farms during the last two years is the uneconomic purchase price for wind energy generation, says A Jagadeesh, a wind energy consultant, in the May issue of Renewable Energy World . "Unless a remunerative price is offered, it is hard to expect private industry to participate in wind farms in a big way," he says.

Even if the company is selling power to other companies, there is a problem of loss of power during transmission and distribution. If the grid is weak, in other words the number of transformers are inadequate, any additional burden will cause the grid to trip. "Transmission losses (of wind power) are estimated to be around 22-23 per cent in Andhra Pradesh, out of which one-third is due to grid failure," says J Manmohan Rao, member of the state electricity board.

Then there is a problem of reactive power requirement, or electricity required by generators to charge their coils before starting power generation. weg s draw this electricity from the grid. According to the Tamil Nadu Electricity Board directive, reactive power requirement should not be more than 30 per cent of the wind energy generated. But manufacturers have little control over the actual situation. When there is a repeated start-stop operation, particularly during low wind speed periods, it goes up to 60-70 per cent. "The problem is there. It is a bone of contention between the government and power producers," says AS Siva Kumar of Madras Cements Ltd.

Problems of grid failures take place when electricity is produced. But there are places where wind farms are lying idle because of poor micrositing -- pinpointing the exact location for a wind farm. In many case, wind flow patterns, nature of the terrain, local geography and landuse patterns have not been taken into consideration while choosing the site.

Hence, many of the weg stations have little wind to run the mills. Prime examples are Tuticorn in Tamil Nadu, where the second wind farm was set up in 1986, and Puri in Orissa. Both the projects had to be scrapped because of lack of strong winds.

"So compelling was the need to obtain the depreciation benefit that necessary attention was not given to selection of the location for optimum generation," say Reddy and Subamaniam judging the successes and failures of the wind projects at Ramagiri in Andhra Pradesh.

As elsewhere, the wind power sector is also beset with administrative bottlenecks. Nodal agencies in several states show no sustained interest in developing weg projects. In Karnataka, despite the initial interest shown by certain private developers, there has been no follow-up.

In some states, there is a problem of land acquisition for wind farms too. According to Siddalingappa, "Studies reveal that at higher altitudes, wind is available at greater speeds and the percentage of availability is also higher. But elevated hillocks are generally in the possession of the forest department. The non-availability and enormous delays encountered in diversion of such land for this purpose, is a major constraint for the speedy development of wind farms."

"Further, conversion of land for non-agriculture purposes and getting clearance from various government departments such as the pollution control board, national airport authority and railway clearances add up to the problems," he says.

Where wind technology is concerned, "we have technology of international standards", says Suresh. Early development of windmills in India has been greatly aided and influenced by Danish aid, according to scientists at the Bharat Heavy Electricals Limited. Danish material was more economical as well. weg s available in India now are based on successful Western models. Most of the weg manufacturers are in the private sector. According to mnes, the manufacturers have attained 80 per cent indigenisation, but all of them work in collaboration with Danish, German and Dutch firms -- the world leaders in wind technology.

The nations that could benefit most from wind are in the developing world, where power demand is growing rapidly, and most countries lack adequate local supplies of fossil fuels. But if the scenario does not change, the contribution of wind energy to India's electricity demand will continue to be less than 1 per cent, which it currently is.

Written by Mridula Chhetri with inputs from Manish Tiwari.