A town began to grow, then groan 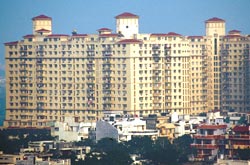 Gurgaon is divided into two -- old Gurgaon (municipal limit area), and the Haryana Urban Development Authority (HUDA) area. The latter further comprises HUDA sectors and industrial hub Udyog Vihar. The real work of formal private sector development -- better to call it colonyfication -- started after the Haryana Development and Regulation of Urban Areas Act was passed in 1975. The objective of the Act was to provide developed land and housing at a faster pace. This was possible by channelising non-government resources into urban enhancement: private sector involvement was to be the agency of urbanisation. Under this act, HUDA was set up in 1977.

Haryana became the first state of the country to adopt a policy on public-private partnership for urban development. The strategy was two-pronged: either HUDA acquired land and developed it; or private colonyfiers would be issued licenses to do the same. "In the case of Gurgaon, private colonisers were given licenses to acquire land and develop it. Although there were some problems, such as local people not agreeing to part with their land, the scheme more or less worked," says R R Singh, executive director of New Delhi-based National Real Estate Development Council.

The process got a fillip in the early 1980s, when industrial/commercial houses began trickling in, to make the most of what HUDA was offering. Real estate developers came too: 26 builders were in full swing by the mid-1990s. They built sleek glass-fronted edifices to tempt business houses. Many gave in. Pepsi, GE Capital, Flour Daniel India Pvt Ltd and others moved from Delhi to DLF Corporate Park in 1997. "A main reason for these corporate houses to shift from Delhi to Gurgaon was availability of free hold land. At that time the Urban Land (Ceiling and Regulation) Act, 1976, was applicable in Delhi. As per this Act, no one could own plots more than a certain size so as to prevent concentration of urban land in a few hands. The situation in Gurgaon was contrary. The Haryana government was inviting private colonisers and providing free hold plots," informs V K Dhar, faculty at the New Delhi-based National Institute of Urban Affairs, a body under the aegis of the Union ministry of urban development and poverty alleviation.

New Delhi-based urban planner, Gita Dewan Verma, says that whereas the intent behind the state government's housing policy was sound -- meeting housing needs by accelerating land assembly in all urban areas of the state -- the private colonisers confined their partnership to swanky development near Delhi. Subsequent planning for Gurgaon has been determined by this distortion rather than by sensible considerations like carrying capacity constraints, or regional development imperatives.

In a similar direction went the good intent of the National Capital Regional Planning Board (NCRPB), set up in 1985. NCRPB formulated a Regional Plan-2001 for the national capital region in 1989. This plan aimed at "reducing the pressure of population on Delhi by deflecting 20 lakh population and attaining a balanced and harmonised development of NCR, in an inter-state region consisting of national capital territory Delhi, six districts of Haryana, three districts of Uttar Pradesh and part of Alwar district of Rajasthan covering an area of 30,242 sq km". Projects were floated to resuscitate Delhi.


Verma claims Gurgaon has been developed in disregard of statutory plan provisions. "The 1962 master plan of Delhi made explicit proposals for all six ring towns. Whereas for Ghaziabad, Faridabad, Narela and Loni it recommended six to ten-fold growth during 1951-81, for Gurgaon and Bahadurgarh it proposed modest growth due to constrained water sources. Subsequently, in its Delhi Metropolitan Area Plan, NCRPB also flagged brisk development in Gurgaon as a cause for environmental concern. In detailing out the state policy for opening up land development to private colonizers, however, these provisions were disregarded."

Accepts A K Bhatia, senior scientist with the Chandigarh office of Central Ground Water Board (CGWB), "Keeping in mind the scarce water resources, the decision to develop Gurgaon in the present manner was wrong." But from 1981 onwards, HUDA along with the town and country planning office (TCPO) has been issuing licenses to private colonisers to acquire land. These colonisers apply to HUDA for a license, which is granted to them after they pay a certain fee. (According to Dinesh Chauhan, Gurgaon's district town and country planner, the fee structure is Rs 2.47 lakh per hectare (ha) for residential, Rs 3.09 lakh per ha for group housing, and Rs 12.36 lakh per ha for commercial. The first time license is valid for three years, after which it needs to be renewed every two years.)

Armed with the license, the developer directly approaches farmers/land owners to acquire land. It then prepares a land use plan with the help of his own planners. This plan is sent to TCPO for approval. And, according to a senior HUDA official, most times such a plan gets approved without TCPO officials actually visiting the site. The result? Plans on paper are often different from the ground reality (see section: Right of passage?).

The contract has another important clause. Informs Dhar, "As per the contract between HUDA and coloniser, 45 per cent of the total plots need to be carved for economically weaker sections (EWS) of the society. Out of this 45 per cent, 20 per cent should be EWS plots with a size of about 50 square metres (sq m). The rest 25 per cent should be sold by the builder at no profit no loss (NPNL) basis. The colonisers are free to dispose off the balance 55 per cent to the general public." But smartly enough, most colonisers have found ways around this clause. Even the EWS plots finally end up with the rich.

Also, informs Pankaj Kumra, superintending engineer, HUDA, "We have ensured that colonisers do not face any bureaucratic delays. At the time of applying for license, these colonisers also apply to us for clearance of water, sewerage, electricity and siting. And within a few days they get it all from HUDA." In effect, colonisers have quickly settled into a comfortable form of profiteering.


DLF was the first company to get this license in the early 1980s. On its footsteps came other colonyfiers: Ansals, Unitech, Omaxe. "We decided to start business in Gurgaon because of its proximity to Delhi and also because it was one of the best satellite towns," says Ashok Dalwani, former senior general manager of Ansals. At present more than 60 colonyfiers are active in Gurgaon, but the lion's share remains with DLF, followed by Ansals and Unitech (see table: They came).


Share aside, the burst of development these colonyfiers instituted has led to, at root, escalating land prices. In 1966, HUDA paid a paltry Rs 2 per sq m to farmers for acquiring their fields. This increased to Rs 25 per sq m by 1986, and present costs are estimated to be as high as Rs 2,200 per sq m. And this is the cost for HUDA. The cost for private colonisers is still very high. Explains S K Ralli of New Delhi-based Ralli Estate Pvt Ltd, " HUDA acquires land through a government ordinance, which is why the cost of land is cheap. Take the case of private colonisers. The cost of land for residential purpose in Sushant Lok colony of Gurgaon is about Rs 9,600 per sq m. Compare this with Greater Kailash in Delhi, which is between Rs 48,000 per sq m. This explains the rush to shift to Gurgaon."


Gurgaon was sold as a dream. " Building better tomorrow, today" is a DLF slogan. "Our homes, your dreams. Our offices, your success " is Unitech's promise. These dream merchants claim to have helped people realise their dream of bringing Singapore to India by developing NRI cities. Singh claims colonisers made possible what State agencies could never achieve. "The model of public-private partnership is ideal. Private sector makes the investment in developing the area and public sector creates the basic infrastructure. It is the private sector which takes the risk." But what is often not mentioned is that the private sector takes a risk when it knows it can make huge profits. And when push comes to shove, it points fingers at government agencies.

This is exactly what is happening in present day Gurgaon. Whereas initially, both public and private parties jointly decided to 'develop' Gurgaon, today the basic infrastructure mess is being solely attributed to HUDA. "The colonisers were part of policy formulation in this public-private partnership model and so had partnership responsibilities for minding and refining it as they went about their business. They have profited from and taken credit for development of Gurgaon. They can wash their hands off its problems only at risk to their credibility as competent and responsible partners in development," says Verma.

These colonisers are not keeping any stone unturned to prove that HUDA is at fault. "How can DLF say that only 10 per cent of their area is covered under water supply project? We have already covered 90 per cent area. The only portion, which remains is the Qutab Enclave, built way back in 1980s at an elevation up the Aravalli Hills. At that time DLF was supplying groundwater, as water table was good. Today, when DLF has sucked out all the water, we are facing difficulty in pumping water up the elevation," says Kumra (see interview on first page: "Infrastructure is quite bad").