Narasimharaju's dream of providing inexpensive cement for rural use will come true when his plant starts production later this year. 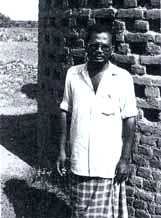 A FEW YEARS ago, L Narasimharaju abandoned his M.Tech studies at the Indian Institute of Science (IISc) in Bangalore and moved to a village. His mission? To help pass on to the people a technology to make cheap and effective cement for rural areas.
Narasimharaju based himself at Ungra village in Karnataka's Tumkur district, where IISc's cell for Application of Science and Technology to Rural Areas (ASTRA) was producing an alternative cement with technology it had developed in the early 1980s. He obtained some land in Kilara, a nearby village, and set up a unit to make lime-pozzolana (L-P) cement using the technology developed by ASTRA. ASTRA's L-P cement has become popular and is sold at Rs 1.30 per kg, compared to Rs 2.40 per kg for Portland cement.
After spending about Rs 1.3 lakh of his own money, part of which he borrowed, Narasimharaju's unit is scheduled in December to produce three tonnes of L-P cement daily -- at about the same price as ASTRA's cement -- using rice husk, limestone and clay. He intends to employ 15 local youth on a monthly salary of Rs 750.
"Portland cement is indeed ideal for use in construction," says Narasimharaju, "but the high costs of its distribution more than offsets the low production costs. Moreover, Portland cement production does not generate any local employment. We don't need Portland cement for plastering or mortaring ordinary houses. Portland cement should be used only for crucial purposes like building bridges."
According to Narasimharaju, about 60 million tonnes of rice husk is produced in the country annually, from which 15 million tonnes of rice husk ash can be made. From 20 per cent of this quantity, 4.5 million tonnes of L-P cement can be made.
"The manufacture of L-P cement is simple and requires lime, clay and rice husk", says Narasimharaju. Limetone is burnt in a lime kiln and slaked by sprinkling water. Clay briquettes (7.5 cm by 7.5 cm by 2.5 cm) are burnt slowly at 700-800oC to release amorphous silica and alumina and are then crushed and ground to fine particles. Rice husk, which contains 20 per cent amorphous silica and has excellent pozzolanic properties, is also carefully burnt.
The rice husk ash, burnt clay and slaked lime are then mixed by weight in the ratio of 1:3:2 and ground to form L-P cement. Adding some gypsum to the mixture can quicken the setting process. The cement is then packed in air-tight bags.
"This method was tried out in other places like IIT, Kanpur, too, but failed because the kilns were too small to maintain the critical temperature," says Narasimharaju. "Controlling the critical temperatures is very important. Sophisticated furnaces that do this cost nearly Rs 2.5 crore. We used a simple cooling technology to maintain the temperature." The only components procured from outside were the pulverisers, which cost Rs 70,000.
Narasimharaju intends to hand over the entire plant to the village committee once he has recovered his initial capital investment. But that is not all. He is organising the villagers of Kilara to plant mulberry on 8 ha of common land leased from the village to generate electricity through a wood gasifier. The villagers can also take up sericulture. To Narasimharaju, these activities are related and might prevent people from migrating to towns.