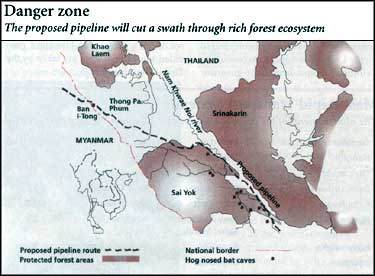 the world's only known natural habitat of the rare Kitti's hog-nosed bat (Craseonycteris thonglongyai) could be threatened by Thailand's bid to bring natural gas from offshore fields in Myanmar. The size of a bumble bee and weighing only two grams when fully grown, the bat is considered to be the world's smallest known mammal and is classified as 'protected' under Thailand's Wild Animals Reservation and Protection Act, 1992. The natural gas project also threatens large tracts of forest ecosystem in western Thailand.

The 670-km pipeline to transmit natural gas from the Yadana fields in offshore Myanmar to fuel electricity plants in Thailand has faced opposition in both countries, making it one of the world's most controversial infrastructure projects. Since construction began on the Myanmar side in early '95, international human rights groups have demanded that the two oil companies -- Total of France and the us-based Unocal -- pull out of the project on the grounds that revenue from the gas will strengthen the State Law and Order Restoration Council (slorc), Myanmar's ruling repressive military regime.

While construction of the Yadana pipeline in Myanmar continues, the Thai side of the pipeline undertaken by the Petroleum Authority of Thailand (ptt) is stalled by concerns that the pipeline will destroy large tracts of rich, undisturbed forest ecosystem in western Thailand. The us $676 million (m) Thai section of the pipeline stretches 297 km from the tie-in point inside the Thai border at Ban I-Tong village, Kanchanaburi province, and would run southeast to feed a 4,600 mw power plant being built by the Electricity Generating Authority of Thailand (egat) at Ratchaburi province. Initial gas delivery is scheduled to begin on July 1,1998, with an initial volume of 141 million cubic feet per day (mcf/d) and increasing to 525 mcf/d 14 months later. According to the 30-year gas supply agreement signed in 1995 between Myanmar Oil and Gas Exploration and ptt, Thailand will pay us $400 m per year to slorc.

The pipeline route will cut a 20 metre-wide route through 26 km of Thailand's western forest ecosystem, which covers an area of about 600,000 ha contiguous with forests across the border in Myanmar. The western forest complex forms one of the largest protected areas in mainland southeast Asia comprising 14 protected areas (pas), of which the Thung Yai Naresuan-Huai Kha Kaeng Wildlife Sanctuary complex is an internationally recognised site accorded the unesco world heritage site status. The project area will also cut across the Thong Pa Phum forest area, which is in the process of being designated a national park by the Thai government. This area is located in the centre of other pas such as the Thung Yai Naresuan Wildlife Sanctuary, Khao Laem national park and the Sai Yok national park.
In early 1996 a consortium of Canada's Nova Gas and OGP Technical Services of Malaysia bagged the us $19.2 m pipeline engineering contract for the Thai part of the pipeline from ptt. The environmental impact assessment (eia) study required for the project was completed by a private firm, team Engineering Consultants, for ppt in January 1996. However, the Experts Committee of Thailand's national environment board (neb) rejected the eia in May 1996 citing inadequate information on the potential impact on wildlife.

As the project area is located inside an area of international conservation importance, team's assessment of the potential impact of the pipeline has drawn criticism from various academics and government officials. According to an independent biologist working in the forestry department, " team's conclusions regarding species presence or its relative abundance in the vicinity of the project site are unfounded."

Concern centres on the pipeline's impacts on the Thong Pa Phum area's limestone hills that are the world's only known natural habitat for the Kitti's hog-nosed bat. According to the eia, the distinctive limestone habitat lies about 500 m north of the pipeline route. The eia states: "The pipeline would not adversely affect the hog-nosed bat since (they) are believed to keep confined to the Sai Yok national park because its foraging distance is well within the radius of one km around the preferred cave. Furthermore, this tiny bat needs the cave with constant temperatures and at a certain level of moisture to roost only, so their movement out of the Sai Yok area to colonise in the Thong Pa Phum area seems unlikely to occur."

Suraphol Duangkhae, a specialist on the hog-nosed bat from the Wildlife Fund, Thailand, dismisses the eia's claims that the pipeline would not adversely affect the bat's limestone cave habitat. According to Suraphol, "The eia does not provide sufficient information to clearly assess the impacts of the pipeline on this habitat and its endemic species. The pipeline will cut across the limestone range that runs from north to south that is the unique habitat for the hog-nosed bat. But the eia does not provide an in-depth study of the contiguous limestone caves and the ecological behaviour of the bats, it merely lists the various species of bats. Although the distribution of the hog-nosed bat is small, the viability of the hog-nosed bat population will be threatened by the disturbance to its limestone habitat caused by pipeline construction activities."

The caves which are the habitat of the hog-nosed bat are known to exist only in the dry, evergreen or deciduous forests in western Thailand. Moreover, feeding areas of the hog-nosed bat are relatively small, within flying distances of one km from the cave. These two conditions confine the bat to caves in the vicinity of appropriate foraging habitats. If its specific caves and habitats are disturbed, it will be very difficult, if not impossible, for the bat to find new roosts. Suraphol also voiced concern that the rarity of the hog-nosed bat has made it a popular trade item among wildlife poachers -- a threat that could substantially increase with the influx of outsiders into the area once the pipeline construction begins. The species is already fast disappearing in Sai Yok national park which is heavily visited by tourists who disturb its caves and its specific 'flyways' used to travel to foraging areas.

In response to the concerns, the neb assigned the forestry department to implement an additional study on wildlife. Meanwhile, ptt plans to arrange a technical hearing in Kanchanaburi to listen to the concerns of various conservation groups. However, ptt's public relations director, when announcing plans for the technical hearing, said, "The ptt has tried to divert the pipeline from the fertile forest areas and national parks as much as possible. We chose the most suitable route for the pipeline and it will never be changed."


Adding to concerns about the forest and wildlife are fears of gas leakage, landslides and massive soil erosion from building a pipeline in a known earthquake zone: the Tennaserim range seismic zone, containing two major active faults, the Si Sawat and Three Pagodas. Almost the entire Thai section of the pipeline is located practically on top of the Three Pagodas fault. Thailand's department of meteorology recorded the epicentre of earthquakes near the project area six times during 1983-1988 at Si Sawat and Thong Pha Phum districts with magnitudes of 4.1-4.5 on the Richter Scale.

Expressing impatience at the delay in the project, ptt gas sector chief, Vihit Yaboonruang said that the consequences could be "very uneconomical" for Thailand. "If the government wants to have a hearing, it can have it, but it will have to be done very fast." As Somphong Tantivanichakul, ptt's director of pipeline projects, explains, "If we cannot meet the deadline to transfer gas from Myanmar to Thailand in 1998, ptt will have to pay us $1.5 million fine per day to the government of Myanmar, and another us $2.8 million a day to buy diesel oil to substitute the gas to be used at the power station in Ratchaburi." Strangely, ptt signed a contract with the slorc dictatorship in Myanmar more than a year before completing an eia or fulfilling the legal requirements of the project approval process established by the Thai government. Now, ptt is complaining about the money it must pay to slorc if construction of the pipeline is delayed for a single day, even as a growing number of nature conservation organisations, independent academics and senior forestry officials are voicing concerns about the impact of the proposed pipeline on one of the most important protected forest ecosystems in mainland southeast Asia.

Noel Rajesh is an environmentalist who works with Towards Ecological Recovery and Regional Alliances, an ngo based in Thailand