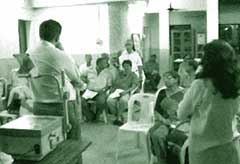 The Brihanmumbai Municipal Corporation (bmc) is reaping the benefits of e-governance. A software it introduced in 2003 is fast changing the image of its 24 ward offices of being sluggish and incompetent, at least with regard to tackling people's complaints. With the help of the Online Complaint Monitoring System (ocms), the first of its kind in the world, ward staff is today tracking complaints and analysing ward-wise data quickly and more efficiently. ocms also enables complainants to check the status of their complaints periodically.

The software was developed by Nixel Technology, which provides information technology consultancy, and Praja Foundation, a Mumbai-based non-governmental organisation. "It enables people to register complaints from anywhere, any time...It has also reduced bmc's workload and enables it to have better communication with people and coordination among wards," says Yazad Jal, chief executive officer, Praja Foundation. "Citizens can choose their mode of filing complaints, which get recorded in ocms by the concerned ward officer. We are training ward staff on the various aspects of ocms," he adds.

ocms is user-friendly. Statistics reveal its popularity: it registers 250 complaints daily, filed through different channels like phone calls to ward offices, calls to the helpline 1916, faxes, emails, letters and personal visits. Once a complaint is registered, a unique complaint tracking number is generated that can be used by the complainant subsequently to know the complaint status. After registration, a complaint is automatically routed to the concerned ward office for suitable action. According to the Praja Foundation's unpublished Complaint Audit Survey 2004, almost 53 per cent complainants said their complaints were addressed in time.
What makes the software unique is the manner in which complaints move to a higher officer, with the municipal commissioner at the highest level, if not handled in a prescribed time frame. The rules for this and the time durations are specified in the Praja- bmc Citizen's Charter, which can be accessed on Praja Foundation's website www.praja.org. ocms also has an inbuilt detailed management information system that makes available reports for each ward and department. These can be customised by date and other variables. Current reports include those on the status of complaint redressal, mode of filing of complaints and their movement.

Besides managing complaints, ocms provides crucial facts about Mumbai's civic problems. For instance, Praja Foundation's survey report says maximum complaints pertain to drainage (29 per cent), solid waste management (17 per cent), buildings (16 per cent), and water supply (10 per cent) departments. It also shows that hotline (38 per cent) and personal visits (36 per cent) are the most preferred modes of filing complaints. Only two per cent complainants used the internet for the purpose. Data like this can help identify problem areas. For instance, chronic complaints about drainage might indicate the need for new pipes. It is hoped that systematic data collection coupled with intelligent analysis will enable bmc to respond more effectively to problems and ensure that solutions are employed before they become too urgent.

The two-year old ocms is facing some teething problems, though. There have been cases of bmc staff marking a work done, when it has actually remained undone. Sometimes complaints can't make it to ocms as some bmc staff fails to feed it into the system. Work is also in progress to set up objective time frames for different types of complaints.

While bmc's initiative is praiseworthy, it hasn't done much to increase its overall popularity. On a scale of five, citizen's satisfaction level from bmc increased only from 2.64 in 2003 to 2.7 in 2004, according to Praja Foundation's survey. The civic body sure needs to do a lot more.

With inputs from Deepa Kozhisseri in Bangalore