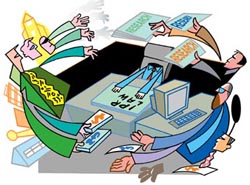 The Union ministry of science and technology (most) has circulated the draft of a bill on intellectual property rights that seeks to give government-funded universities and research institutions the power to patent innovations. This power was vested with the union government. Though, most claims it will give benefit-sharing access to scientists when innovations are commercialised, independent experts say the bill is unnecessary and can probably be dangerous--especially given the us's experience with Bayh-Dole Act which it is based--and difficult to implement given the state of patent infrastructure in the country.

"Our university system does not have patenting offices and science managers to help researchers identify markets and to facilitate patents. Nor does it have a good venture capital funding mechanism for innovations.Under this situation, the new law can be ineffective," says P Bannerjee, acting director of National Institute of Science, Technology and Development Studies (nistads). If a scientist has to benefit from an innovation, the agreement and the mode of benefit sharing should be made transparent. This should be made available to all and maintained online by the business office of the institute, he adds.

If the legislation is to be effective, says Sujit Bhattacharya, a scientist with nistads, better links between research institutions, universities and industry are must. This is now absent in India, where the rate of commercialisation of patents has been slow due to lack of a strong administrative system to monitor issues on intellectual property rights (ipr). For instance, the Council of Scientific and Industrial Research (csir) that supports patenting research results has raised the number of patents to 400 out of which it has been able to commercialise only 170 in the last five years. The Department of Biotechnology under most has acquired 56 patents during last five years and got only seven of them commercialised.
Though the centre says that it has taken sufficient measures to equip the patenting system in India, few have benefited from it. At the Indian Institute of Science (iisc), Bangalore, the system of sharing patent benefits with scientists was introduced in 1990. According to this system, 60 per cent of the benefits from a patented innovation goes to the scientist and 40 per cent to the institute. The introduction of the system hiked the number of patents. "It is not possible to say whether the system has improved the quality of the patents," says S Gopalakrishnan, in charge of the intellectual property (ip) office, iisc.

The patent cells in the country are also not functioning properly. The cells with India's research institutes face many structural problems. The scientific officer in the patent cell helps in obtaining patent rights. Once patents are earned, bids are called for the technology and production. The highest bidder gets the licence. Legal firms work out issues including agreements and other terms and conditions. But ipr offices at iisc and iits today face a dearth of experts on the subject. "We have no science managers or ipr experts. Markets for innovations are identified by management consultants," says Gopalakrishnan."Identification of markets for innovations is something that never occurs. We need better infrastructure for this," says Mohit Mahajan, executive consultant at the Foundation for Innovation and Technology Transfer at iit, Delhi.

Despite the concerns, most remains confident. Sources at the ministry say it is on an administrative reform path. This includes setting up offices for managing ipr and training for civil servants to deal with it. But many researchers feel they will not benefit from the system.


Laws like the Bayh-Dole Act were passed in Korea and Japan only after they geared up their administrative systems to adapt to the requirements of the act. Japan set up a National Institute of Advanced Industrial Science and Technology Innovation Centre for Startups in 2002. This helped it produce fast growing venture companies making practical applications of researches from universities and state-funded institutions. The act also helped some scientists become entrepreneurs. "The corporate governance system in Japan has ensured that this act is put to use in an effective manner," says Bannerjee. So how will this legislative initiative help? "The Bayh-Dole Act has been severely criticised in the us for restricting science and causing loss of academic independence. Such an act can cause similar things in India too. I do not think that the law is required at all," says Dinesh Abrol, senior scientist with nistads. "If such an act is passed it should be reviewed clause by clause. Otherwise there is cause for serious concern." Bannerjee concurs "Without proper precaution, the act can be dangerous."

Many universities in the us had extended patenting and licensing policies after the introduction of the act to protect scientific research results. Scientists criticised the Bayh-Dole Act saying it did not improve the quality of patents in the us and also paved way for a nexus between industry and research institutions (see box Misdirecting research). A paper published in Research Policy in January 2001 (Vol 30, No 1) says the act had limited effects on university research culture in us. Not many universities benefit under the act, says another study by the Iowa State university in September 2006.

A 2003 paper in Law and Contemporary Problems (Vol 66, No 1) says the Bayh-Dole Act draws no distinction between inventions that directly lead to commercial products and fundamental discoveries that calls for further research. Universities took the opportunity to file patent applications on basic research discoveries such as dna sequences and protein structures, triggering an unethical practice. This results in the patent system encroaching the domain of open science, says the study.

Scientists also fear that patenting research result will prohibit publication of the research paper, which means keeping it away from common man's reach. "Who will know about my research if I patent it? I cannot go to the industry and ask them to use it. Neither will people gain from the research nor will I earn benefit out of it, if a company doesn't accept it. On the other hand, if I publish, it will be in public domain and people will be able to derive benefits from it," says a young researcher who does not want to be named.


Experts feel if the Indian version of Bayh-Dole Act is put in place, research work that needs to be in the public domain may also get patented, restricting their diffusion. "The Bayh-Dole Act made universities in us dependent on industry," says Abrol."If most decides to go ahead with its plans, it can invite such unhealthy trends in India's patent scene."

"There is a consensus that this act will benefit us," says M K Bhan, secretary of most's department of biotechnology. But not many are so optimistic. "Today, industry is hardly using any of the innovations by universities. This bill can change this. It will also make universities encourage commercially viable innovations. The only concern of industry may be sharing ip with them," says Anjan Das, ipr section in charge, Confederation of Indian Industry. "The right to use patented innovations should not be given to a single business entity," says Abrol. "We must learn from the drawbacks of the Bayh-Dole Act. Scientists can earn commercial benefits even without the proposed legislation." Many, including Abrol, want a public debate before it's too late.