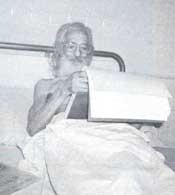 THE simmerings within the environmentalist community spilled out last fortnight and much of the squabblings centred around the ailing Sarvodaya leader, Sunderlal Bahuguna. The ego clashes of people fighting for the people...the teeming millions, left large cracks in the anti-Tehri dam movement, leaving the government to relax, in the absence of a commonly accepted, militant course of action.

Bahuguna's long fast and his being hauled off, on June 9, to Delhi's All India Institute of Medical Sciences (aiims) -- sans arrest warrant, sans charges -- had boosted the spirit of the activists. Several organisations seemed to be on the verge of charting out a strong course of action. But the arrest finally brought out the schism within the movement.

The modus of picking up Bahuguna should have been potent ammunition for the activists. Senior civil liberties activist Rajinder Sachar termed it as illegal. Bahuguna's counsel, Rajiv Dhavan said that the government's attempt to charge him with attempt to suicide would not hold water, as the Supreme Court has already ruled this to be a non-cognizable offence. Anecdotal reports on Bahuguna's attempt to resist "arrest" and the shabby treatment at the aiims had provided an excellent setting for a high-pitched agitation. However, the Tehri Action Committee (tac) which had been hastily set up while Bahuguna was on fast, itself became the breeding ground of bickerings.

The first action of the tac was to file a writ with the Allahabad High Court, which eventually ordered the government to take Bahuguna back to Tehri. But apart from that, the tac displayed all the characteristics of a loose organisation. Even as the daily press conferences and dharnas continued, the venue shifting from aiims to the Khadi Gramodyog Bhawan in Connaught Place, a shopping centre in the heart of Delhi, the rift came out in the open.
Medha Patkar was the first casualty. She had rushed to Delhi to meet Bahuguna in aiims, but she did not hold the press conference slated for June 10, darkly hinting at people inside the tac who did not like her joining forces with them. In fact, she was bourne out by these critics themselves. Said Vimal, an activist of Delhi's Gandhi Nidhi, "Why should Medha speak? What does she know of Tehri?"

The ominous dark clouds, in fact, had been seen gathering earlier. The Minister of State for Environment and Forests, Kamal Nath, was to preside over a lecture to be delivered by eco-feminist Vandana Shiva at Delhi's Kamani Auditorium on June 5. It was the World Environment Day, and the occasion was the 17th Foundation Day of the National Museum of Natural History. The previous day, Medha Patkar had been arrested en route to Tehri, where Bahuguna was still fasting. It had been expected that Shiva would lash out against Patkar's arrest and demand a review of the dam project.

However, it turned out to be a damp squib, as Shiva, while eulogising Bahuguna, merely said that a few persons had been arrested on their way to meet him. She did not ask for a review, nor condemn Patkar's arrest.

The activists present at the auditorium had earlier decided to gherao Kamal Nath after the meet, but let down by Shiva, they disrupted the meeting. An incensed Madhu Kishwar, editor of Manushi, interrupted Nath's address and said, "How can we sit here placidly and discuss environment when Bahuguna is almost dying and Patkar gets arrested just because she goes to visit him? Why don't you intervene and get an independent high level review of the dam done? And till such time, stop the construction work?" The usual sloganeering and black placards showed up too.

The activists wrangled out of Nath the assurance of setting up 2 committees to review the environmental and safety aspects of the dam. But tac convener, Nalni Jayal tripped at the crucial moment. When the cornered Nath asked her for the names of possible committee members, Jayal dithered and pleaded for time. Activist film-maker Jharna Javeri warned, "You know what happened to Nath's review promises on the Sardar Sarovar Project. He has to be pinned down." Nobody, it appeared, had a concrete agenda for the future. In the circumstances, few were surprised when Nath subsequently reneged on his promise for a review, leaving the tac wringing its hands. The tac's lackadaisical approach has been evident for some time. It claims to have in its possession several 'secret documents' on the project. Dhavan says most of these are covered under the Official Secrets Act. These papers reportedly expose the split even within the government about the wisdom of going ahead with the dam. When Jayal asked Nath about the official secrecy surrounding Tehri, Nath replied , "You have been in the government, Nalni, and know how it works. But whenever you have asked for any paper, I have passed it on." The hint confused none present. Till date, the often promised Black Paper based on these documents remains to be released to the Press.

Given the lax, divergent approaches of the faction-ridden tac , the government could afford to be cavalier in its attitude. Prime Minister Narasimha Rao's letter to the Bahuguna, requesting an end to his fast, said he was writing it on the request of Justice V K Krishna Iyer. But Rao did not comment on the dam or the review. And he was unruffled after being heckled by 3 members of the Tehri Action Network-London, during his inaugural lecture to the unesco on June 13 at Paris.


Nath's may have been emboldened by the fact of the many reviews already ordered by the government, several have been very favourable to the Tehri project. In fact, government spokespersons assert that they are totally satisfied about the safety aspects of the dam, though, the admit, the people have yet to be convinced about this, since there are several shortfalls in several other aspects of the Tehri project. Principally, these relate to statutory watershed area development and standby disaster management plans. The confidential minutes of the last review meeting of the Cabinet Committee on Economic Affairs (ccea) held on the Tehri dam earlier this year, show that the government is worried.

Neither the Union government nor that of Uttar Pradesh (up) have information on whether adequate catchment area measures have been undertaken. Flora and fauna surveys as well as the Command Area Development plans are still in their preliminary stages. Glaring gaps in the rehabilitation plans are evident. Most significantly, the disaster management plan has not been finalised, since the concerned papers are still shuttling between several Union ministries and up's bureaucratic corridors. The ccea has also noted that much of this lag is due to continued delays in establishing the long proposed Bhagirathi Basin Management Authority.

Officials view these lacunae as responsible for the government not being forthcoming on the safety aspects of Tehri, or pushing towards a 1-time resolution of the issue. This gives the activists more leeway to demand concessions, but the overall impact has been that the people at large are left confused.

Interestingly, the congregation of environmental activists and organisations threw up several comparisons between the 2 movements against the Tehri and Narmada dams. Some even pointed out that the anti-Tehri movement has consistently floundered because of a lack of a mass support-base at Tehri Garhwal, particularly, and the hill districts in general.

That criticism explained the tac's allergy towards Medha Patkar, who had been the most vociferous in demanding grassroots mobilisation of the potential victims. In fact, acerbic critics have already dubbed the tac as bac, or "Bahuguna Action Committee". Says Rajiv Vora of the Gandhi Peace Foundation, "Bahuguna is a Gandhian satyagrahi. But his followers are mere seekers of glory. Instead of staging dharnas in Delhi, in front of bbc cameras, they should have gone to the villages to mobilise opinion against the dam. But are they prepared to make such a sacrifice?"

It was not just that the movement lacked popular appeal even while Bahuguna was fasting. Worse, several of his associates from the Chipko movement days could hardly be bothered to join the gathering of environmentalists in Delhi. The absentees include Pratap Shikar of Jajal, who runs an NGO now; Vijay Singh Jardhari of Jardhar, now a natural farmer; and Shamser Singh Bist of Almora who runs a printing press. These leaders still have a following in the villages. Some reports say that they had come to Tehri to garner mass support initially, but were cheesed off with the hoards of urban neo-environmentalists descending on the scene. And Chandi Prasad Bhatt sats in studied silence in Gopeswar, nursing his differences with Bahuguna from the Chipko days. Clearly, the ego-system of Indian environmentalists is more fragile than the ecosystem of the Himalayan ranges.