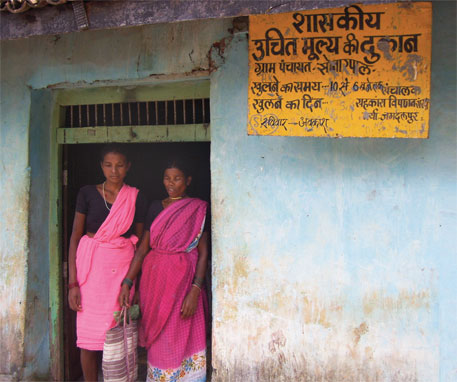 The government has denied 76 million people in the country eligible to access public distribution system (PDS) the benefits of the food security system. For the past 20 years, the government has not cared to refresh its data and has been distributing foodgrain according to the population figure of 1991.

Worse, the Centre has stopped additional allocation of five million tonnes of foodgrain to 150 poorest districts in the country since the current financial year. The decision to give additional foodgrain was taken in 2011 on the recommendation of the Central Vigilance Committee on PDS headed by Justice (Retd) D P Wadhwa.

In 2001, People’s Union for Civil Liberties (PUCL), a human rights organisation, filed a case in this regard. About two years ago, the Supreme Court directed the Centre to identify the PDS beneficiaries based on the 2011 census. But the government took no action. On April 23, this year, the apex court reminded the Centre of the order. The Centre will give its reply in July.

The country’s population was 840 million in 1991, significantly less than 1,210 million as per 2011 census. But the government recognises only those beneficiaries whose names appear in the 2000 population projections, which, too, were based on the 1991 census. Population projections were not made in 2010. In 1993-94, the Planning Commission decided that at least 36 per cent of the country’s population should be given the benefits of PDS. The decision was taken on a recommendation made by an expert group on estimation of proportion and number of poor. The expert group was chaired by D T Lakdawala. Following this, the government calculated the number of beneficiaries as 359.2 million. Ever since, no change has been made in the number despite two censuses.

“Had the government given PDS privileges to 36 per cent people based on 2011 census, there would have been 76 million more beneficiaries. But the government stuck to the population projections of 2000,” says Kavita Srivastava, petitioner on behalf of PUCL. Close to 30 million people have been left out in Bihar and Uttar Pradesh alone.

The number itself is mere estimation, says Biraj Patnaik, adviser to the commissioners appointed by the Supreme Court on food security. The number could be more, he says. “It is the duty of the government to find the exact number of exclusions and give those deprived their due.” 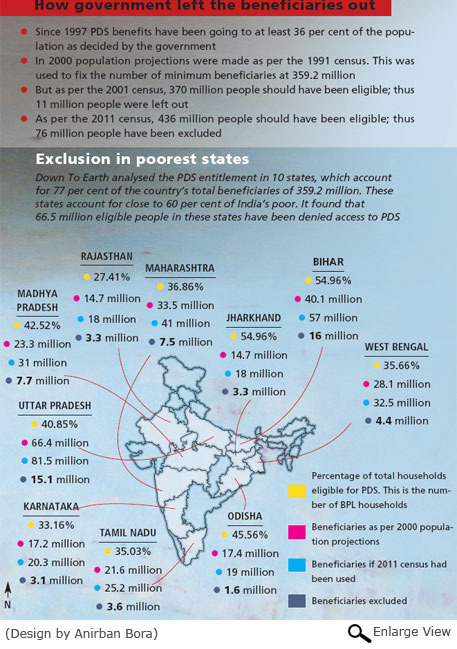 To upgrade PDS lists, state governments have removed names of some beneficiaries stating that they no longer belong to the category. But no name has been added to the lists so far, says Dharmendra, convenor of the Delhi division of Right To Food Campaign. P P Malhotra, additional solicitor general, who is pursuing the case on behalf of the government, calls the exclusion an oversight and blames it on absence of a proper law. Enactment of National Food Security Bill will fix the problem, he says. “Covering so many people as per the new census figure involves huge expenditure. We cannot bear this without a law mandating it.”

Considering the condition of 150 poorest districts, in 2011 the government had allocated additional 2.37 million tonnes of foodgrain to families registered under Antyodaya Anna Yojana and those living below poverty line. The recommendation of the Central Vigilance Committee on PDS was accepted by the Supreme Court on May 14, 2011.

On March 13, the government raised the additional allocation to 5 million tonnes. But the programme was abruptly stopped from this financial year. “The government took the decision to reduce its food subsidy bill,” says Sejal Dand, adviser to the commissioners appointed by the Supreme Court on food security.

“The additional allocation was never meant to be permanent. We did what the apex court had ordered,” says Kumar. But he admits the allocation was a financial burden which the department could no longer afford.

In Chhattisgarh, 22 out of its 27 districts were chosen for additional allocations. The Centre’s decision to discontinue it has created problems for the state, says Bikash Sheel, secretary, department of food and civil supplies of the state. “On the Supreme Court’s decision, we issued additional ration cards in order to provide foodgrain to vulnerable groups. Since the Centre has stopped the allocations, the state government will have to bear the cost,” he says. “This will create another socio-economic problem. What if one ration card bearer gets grain and the other does not?” An affidavit has been filed in the Supreme Court against the ministry’s decision, says Sheel.