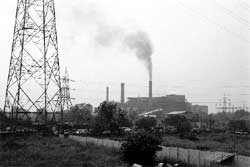 Pune has enjoyed the reputation of being one of the cleanest cities in the country with regard to air quality. The number of premature deaths in Pune is estimated to have decreased from 991 in 1991-92 to 454 in 1995. Similarly, illnesses due to air pollution have decreased from 5,65,372 to 2,59,181 during the given period. Annual average level of spm in 1991-92 in the city was 196.6 g/cum. In 1995, it dropped to 129.5 g/cum. From these figures, it would appear that lower levels of spm as reported by the cpcb would have resulted in improvement of the status of public health in Pune. dte was eager to find out why levels of spm could have decreased in Pune over this period.

The city is surrounded on three sides by the Sahyadri mountain range. The eastern side is open. This geological formation has put some natural constraints on air circulation across the city. Small-scale industrial units have been mushrooming on the three hilly sides within a radius of about 20 km. The resultant smoke, dense particles, hot air and solid waste contradict the "clean city" image of Pune.

There are no large industrial units such as refineries or thermal power stations in Pune. But it is known as the auto capital of the country with two of the biggest automobile companies, the Tata Electrical and Locomotives Company (telco, the largest manufacturers of trucks in the country) and Bajaj Scooters (India's largest manufacturers of two-wheelers), based in the city. Ironically, the auto factories are not causing environmental problems in the city. The main pollutant in the city is auto emissions from petrol-driven scooters that have two-stroke engines. On an average, 250-300 vehicles are registered with the regional transport office every day. At present, about 550,000 of the 800,000 vehicles on Pune's roads are two-wheelers. In 1993-94, about 80,000 two-wheelers were sold in the state of Maharashtra, 58,000 of these in Pune.

Recently, the municipal and state authorities have raised the floor space index for residential and commercial constructions in Pune. This has resulted in increase of high rise buildings. The combination of narrow lanes, tall buildings and a large number of scooters (which in some cases have to be parked on the second floor) has increased the levels of spm to dangerous levels. The acceptable level of SPM is 500 g/cum. It has reached levels of 800-1000 g/cum. The worst victims in Pune are the traffic police personnel. A survey conducted in June 1996 revealed that 80 to 85 per cent of traffic police personnel suffer from various ailments, diseases and disorders connected with high levels of spm . There is a marked rise in respiratory problems, sinusitis, lung infections, eye and skin irritation, insomnia, stress and diabetes. Municipal records for the number of people suffering from tuberculosis has risen from 617 in 1992 to 850 in 1996. Clearly, despite the lack of polluting industries and thermal power plants, Pune may be witnessing an increase in spm levels. The lion's share of the blame goes to two-stroke engines that make up for more than 67 per cent of the total vehicle population. Small-scale industries also stand to blame.


Air quality in Indian cities is deteriorating at a shocking rate. While major cities such as Delhi and Calcutta face severe air pollution problems, the emergent picture is none too good in smaller cities. Even as cpcb data indicate an improvement in air quality in cities such as Pune, Bhopal and Agra, dte reporters found no evidence to support this. In fact they found that air pollution due to spm emissions may even be on the rise. The inferences drawn by the dte reporters are based on general opinions and the data obtained during their field visits is limited.

There are two reasons why the air quality data reported by the cpcb for Pune, Bhopal and Agra does not match with the assessment made by dte reporters. Firstly, the data on ambient air quality does not reflect emissions from vehicles and is therefore not indicative of the deteriorating trend perceived by dte reporters. Secondly, it is possible that even though auto emissions are on the rise in cities like Pune, Agra and Bhopal, meteorological factors -- such as wind velocity -- affect the spm levels. While cpcb monitoring takes account of these physical factors, dte reporters could not include them in their assessment during the field visits. Nevertheless, it is clear that hardly any effective measures have been taken to curb pollution over the past few years.

The number of vehicles, especially diesel vehicles, are rising at a frightening rate. The situation in Delhi, Calcutta and Bhopal proves this beyond doubt. The concept of puc certificates is a farcical exercise in most cities visited. There is no reason not to assume that the puc certificate is in any way effectual in combating pollution. Even if emissions are within permissible levels, the alarming rise in the number of vehicles would prevent the pollution load from coming down. In places such as Agra, closure of thermal power plants is leading to rising numbers of diesel generators. Lawyer M C Mehta may have earned a name and awards for himself following his petitions in the sc but these have largely failed in controlling the levels of pollution in Agra. In Delhi, government officials are either blissfully unaware of the number of polluting industrial units or plainly incompetent in dealing with them despite the directives of the sc . Though esp s have been installed in thermal power plants in the city, nothing can be said about their effectiveness.

An important question mark is on the effectiveness of following Western models in developing countries such as India to estimate the health effects due to pollution. In order to get a clear picture of problems in India, there should be a model that takes all the local parameters into consideration. Given the complete lack of epidemiological studies in India, there is no doubt that models from developed countries provide some insight into the health impacts of environmental degradation. But it is crucially important to have reliable local estimates of health damages due to air pollution as they provide means of evaluating the results of pollution control measures.

The wb study by Carter Brandon claims that its estimates are conservative as many factors such as standard of living, nutrition and health -- that are generally poor in India -- have not been considered in their model. So it underestimates the number of premature deaths and sicknesses. A previous story by Anil Agarwal in dte (Vol 5, No 10) had analysed several unaccounted environmental costs in the wb study. The need for developing a model more suitable to India has never been greater. Air pollution in India needs to be taken very seriously at all levels.