Concerned residents of the city have formed groups to ensure the municipal authorities take care to keep the city clean, green and functioning. 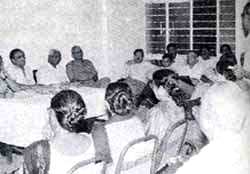 CITIZEN'S groups in Pune monitor their municipal authorities closely to ensure they do not let the city become a concrete jungle.

These groups insist on inspecting town plans, on offering alternative building proposals and on never relaxing the pressure on the authorities, whom they hold accountable to the people.

Not awed in the least by municipal bigwigs, these citizens's groups never hesitate to query them should a high-rise violate urban building laws or if a highway should threaten the green cover or if a business establishment should usurp a park. And should the need arise, take remedial action.

Sujit Patwardhan of a citizen's group named Parisar, which is involved in environmental education and awareness, explained, "There is a need for people to have a say in the growth of their city. "Parisar, for example, is concerned with such matters as tree-felling, garbage collection and illegal construction.

What sets Pune citizens apart from residents of other cities is that they have gone beyond merely trying to beautify middle-class neighbourhoods. "An effort has been made to develop a comprehensive environmental perspective to urban development, "said Patwardhan. This takes into account such issues as public utilities, drinking water and low-income housing, for all of which, Patwardhan added, the emphasis is on formulating a development model that makes sustainable use of scarce urban resources.

To do this, Pune citizen's groups became involved in the drawing-board stage itself, something made possible by the municipal corporation appointing a town planning officer, under the provisions of the Maharashtra Town Planning Act, 1982, which also empowers concerned individuals and citizen's groups to give their comments and make recommendations.

That Pune residents have taken this seriously is clear, because more than 3,000 individuals and social action groups have so far forwarded suggestions to the town planning officer on subjects ranging from providing for public areas and gardens to improved public utilities. Major changes that have resulted include guaranteeing various municipal services and setting strict Floor Space Indices (FSIs) to prevent the construction of buildings that are only massive slabs of concrete.

The willingness of Pune residents to become involved in town planning even at this late stage, has made the authorities more accountable. Municipal commissioner Ajit Warti meets frequently with citizen's groups and K Subramanian, who has overall charge of Pune Cantonment municipality, says it's because of citizen pressure that "we now also have to consult environmental groups before plans are passed".

Citizen's groups in Pune are quite aware that paper promises mean little within the confines of municipal corporation walls. Said Patwardhan, "Many of the provisions of the town planning act have been watered down." He was echoed by Netraprakash Bhog of Pune's the Social Civic and Environmental Forum, who added, "Unless we constantly follow up on municipal plans, they will be violated."

But such pressure tactics have also come in for criticism and G M Madame, town planning director, complained, "Pressure groups have to become action groups instead of only criticizing." J G Keshkar, who was appointed town-planning officer in 1982, noted, "Despite the pressure of citizen's groups, development plans are not being implemented." He blamed this on vested interests acting above the law.

Environmental action groups in Pune have taken legal action on several occasions. One example is Aurora Towers, a multi-storeyed hotel on Mahatma Gandhi Road, and it shows the determination of Pune activists to ensure regulated urban planning receives priority consideration from the municipality. When Aurora Towers was being constructed, a petition was filed in the High Court contending it violated the FSI regulations of the Cantonment Board. The petition, filed by the Bombay Environmental Action Group and Save Pune Citizen's Committee, challenged the board's sanctioning of Aurora Towers. The High Court ruled concerned citizens and social action groups have a "right to know" and can inspect any document relevant to building plans. The ruling was a landmark decision because it empowered Pune citizens to inspect building plans if necessary, to ensure nothing illegal is being attempted. Recently, a citizen's group obtained a ruling preventing the municipal authorities from digging up a pond in Pune's Model Colony.

Patwardhan says if citizen's groups are to be effective, it is "necessary for them to know the law", for they must have the law behind them. This is what Parisar attempts to do -- get its members to learn the law, because only then can they tell when a law has been broken. Patwardhan is quite aware that the legal option is a limited one but his hope is that in the process of learning the law, people will educate themselves.

Lauding the Indian Express' Citizen's Forum, Patwardhan said, "Newspapers can reach people by flashing news." The most important achievement of the Citizen's Forum, he added, was the establishment of a high--level official committee under former Maharashtra chief secretary K G Paranjpe to examine the problems of urbanisation in the twin cities of Pimpri-Chinchwad.

A major worry that Patwardhan voices is that urban planning is not being looked at holistically and "many action groups still are too focused on local issues". He urged, activists to question the nature of urbanisation and to study the urban environment for both global and local implications.