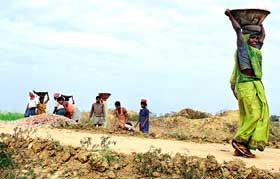 The Union ministry of rural development (mord) has allocated Rs 11,300 crore for the fiscal year 2006-2007 towards nrega. The Centre has already released Rs 4,401.57 crore to states in the last six months and the rural development ministry has spent Rs 2,367.56 crore. Madhya Pradesh and Rajasthan, according to mord officials, are the only two states to ask for the second installment of funds. Uttar Pradesh, Bihar, Jharkhand, Assam and West Bengal, which constitute 41 per cent of the total districts implementing nrega, have been able to spend hardly 15 per cent of the initial installment allotted.

On August 2, 2006, Suryakanta Patil, the Union minister of state for rural development, claimed that nrega had achieved a "90 per cent success rate". She said that 68.86 lakh jobs had been provided against 73.28 lakh applications. Raghuvansh Prasad Singh, Union rural development minister, on August 25, 2006, said that about 1 million more jobs were added to nrega. He said more than 8.3 million rural households had been provided employment and 254,73,820 job cards issued. Out of these, 89,43,703 had demanded employment, which meant a success rate of almost 93 per cent. But Renuka Vishwanathan, secretary mord, said that although the results were encouraging, there was no official data that supported claims of achieving a 90 per cent success rate, and called it baseless.
For the civil society, nrega's implementation is marred by crucial faults. In the last two months, at least six state-specific surveys have been carried out by various organisations. The surveys indicate that Panchayati Raj institutions (pris), the nodal bodies under the act, have not yet been empowered to implement the act. Going by the assessments, political intervention at local level is taking a toll on the authority of pris. The objective of creating productive assets under the act is not being adhered to either, thus limiting its impact on local development.

According to the act, panchayats should implement at least 50 per cent of the total works (projects) mentioned. Assessments show that steps have not been taken to enable them to handle such work. Central guidelines mandate an employment guarantee assistant for each village panchayat to be recruited to assist in the scheme's implementation. But this has not been done in most of the states.As a result, panchayats have not completed selection and registration of employment seekers, thus leaving large gaps between registrations and providing jobs. "Without the functionaries, the panchayats cannot implement the functions under nrega effectively," says Manoj Kumar of the Society for Participatory Research in Asia (pria), a Delhi-based ngo.

Add to it attempts by state governments to dilute the power of panchayats under the scheme. For example, in Madyha Pradesh, the tehsildar (designated as employment guarantee scheme circle officer) has the power to decide the validity of applicants for jobs, in case a complaint is lodged against the head of the panchayat. In many states, district collectors have been made the district programme coordinators thus diluting the principle of making the panchayats the 'principal authority' under the act. "The process of registration and issue of job cards for aspirants under nrega is marred by political discrimination," says Sanjay Sharma of the All India Agrarian Labourers Association, an association of labourers monitoring the scheme in 110 districts. Evaluation of nrega in Karnataka and Andhra Pradesh done by Trilochan Sastry of the Indian Institute of Management, Bangalore, points out that the panchayats are not being encouraged to be in charge of the scheme as it mandates. "Selection of work is totally in the hands of either the local elites or the local bureaucracy with no real role of the gram sabha," he says.


Many states have not adopted the conformity schemes as mandated by nrega, under which states need to evolve their own employment guarantee schemes. Admits Singh, "The initial problem has been states' not implementing nrega full scale." Eight states -- Chhattisgarh, Haryana, Madhya Pradesh, West Bengal, Tamil Nadu, Karnataka, Maharashtra and Meghalaya -- have constituted Employment Guarantee Councils, as mandated by the act, but they have changed their composition by nominating only government members. And those states that have adopted the conformity schemes have not issued operational guidelines.

Chhattisgarh, Madhya Pradesh and Rajasthan have formed executive councils with just government members. Chhattisgarh and Madhya Pradesh have transferred all powers of the state councils to an empowered committee. "All decisions of this empowered committee will be final. Provision of such committee may severely undermine the status of non-official members of state council, as the council may be used as a mere rubber stamp," says a pria report after assessing nrega in 11 states.


nrega is also being contested on its provision of creation of productive assets. Out of the nine types of works prescribed by nrega, seven are on water conservation and management. States are free to evolve their own specific preferred work but within broad guidelines. This is to ensure that the local needs are reflected in the scheme. But most states have retained the suggested preferred works under the act.

Few like Andhra and Orissa have decided to develop sc/st land for irrigation and development as a priority. "But in the field we don't see this happening, despite the guidelines. No sc/st land has been developed so far. Building roads rather is a priority," says Sharanya, programme officer, Action Aid India. Bela Bhatia of the Centre for the Study of Developing Studies, Delhi, who recently did an assessment of nrega in Jharkhand says, "There is a great scope for rain harvesting, tank and road building, wasteland regeneration and development of sc/st land in the state. But not much is happening under nrega."

According to mord data, however, the focus on water conservation under nrega is being maintained. Of the 2,60,332 works taken up under the scheme, 1,41,085 are on water conservation, 16,727 for plantation and drought proofing, 3,391 for flood control and 43,859 for rural connectivity and other works. But ngos are sceptical of government's claims. "The government claims of success need to be verified on the ground," says Sandeep Chachra, international coordinator for governance, Action Aid.

While it may be too early to come to a definite conclusion on the success of the act, the plan for sure has caught up with rural imagination, which was expected. But the fact that there are problems also cannot be ruled out. There is still time and given efforts to address the problems at this stage, there should be no reason why the scheme cannot achieve success.