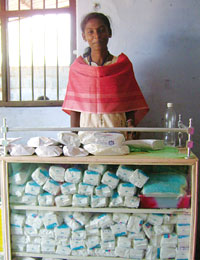 Unavailability and high costs of sanitary napkins deter menstrual hygiene in rural India. The scheme aims to provide one pack of six sanitary napkins at Re 1 to girls in the belowpoverty- line category. Those above the poverty line will get the pack for Rs 5.

Approved by the National Rural Health Mission, the scheme’s first phase will cover 150 districts, targeting 15 million girls between 10 and 19 years of age. “Women in most villages use dirty cloths during their menstrual cycle. Sometimes the same cloth is shared by more than one woman,” said Sudha Tewari of Parivar Seva Sanstha, a nonprofit in Delhi that has studied menstrual hygiene in villages. “In Rajasthan, some women use sand bags. Such unhygienic methods cause diseases, including reproductive tract infection,” she added.

Citing such health problems activists for long have been demanding a programme targeting menstrual health in villages. “The ministry was working on the scheme for the past two years,” said a health ministry official. There were suggestions that the napkins should be sourced from self-help groups because they make low-cost sanitary napkins, especially in south India, he added. The team under the National Rural Health Mission travelled to Tamil Nadu where self-help groups make sanitary napkins. After the visit the ministry decided that of the 150 districts it would procure sanitary napkins for 50 districts from the groups.

Cost is the key

Self-help groups in southern India have been a success. Tamil Nadu alone has around 100 sanitary napkin manufacturing units. Each unit makes 30,000- 50,000 napkins per month and sells them to women at Rs 1-2 per napkin. A group started 10 years ago by Kannaghi Chandrashekhar of Puddkottai village has helped 150,000 women shift from old cloth to sanitary napkins in and around the village. 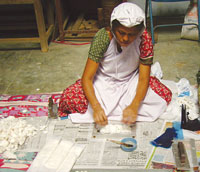 Her group, called Welfare Organisation for Multi-purpose Mass Awareness Network (WOMAN) makes 600,000 sanitary napkins every month and sells them at Rs 2 per napkin. “We started with a small unit and made napkins using cloth and cotton. Our technology has evolved and now we have six big units that make industry-standard napkins at minimal cost,” said Kannaghi. The napkins are made of pine wood pulp, cotton and cloth. The cost of production of each napkin is Rs 1.20. The production unit sells the napkins to vendors for Rs 1.50, the profit goes towards running the units.

Every production unit employs 10- 12 women. It has helped improve their quality of life. N Noorjahan, 38, is in charge of one such manufacturing unit of WOMAN. In 2005, when she decided to work with the group, her husband, a bus conductor, earned Rs 2,000 and it was difficult to make ends meet. Today, she earns Rs 5,000 and they lead a better life. WOMAN also employs to spread the word on the use and disposal of napkins. “They can be burned easily without causing pollution,” said Sushila, 49, of WOMAN.

Self-help groups are gradually gaining popularity in Karnataka, Andhra Pradesh, Maharashtra, Gujarat and Uttar Pradesh. In Anupshaher in Uttar Pradesh, a girls’ school run by the nonprofit Pardada Pardadi Educational Society has installed a low-cost sanitary napkin unit. It employs its former students to run the unit, and sells a pack of 10 napkins to students at Rs 5. Members of the students’ families have also started to order.

Now with the government scheme, these groups hope to expand their reach. But the government might also rope in private players. “Napkins can be procured from self-help groups for 50 districts. For the remaining 100 districts, bidding might be done because self-help groups’ scope is limited,” said a health ministry official. “The choice of sourcing napkins would be left to the states,” he added.

Bidding might promote corruption, said Abhay Bang, who runs a community- health non-profit SEARCH in Gadchiroli, Maharashtra. Besides, it will open the routes for multinational companies to enter the rural market. “Once rural women are dependent on their products, the MNCs can increase the prices according to their wish. The napkins should be procured from self-help groups,” he added.

Procter and Gamble (P&G), an MNC that makes sanitary napkins, refused to comment whether it would participate in the bidding. Despite repeated attempts, P&G and Johnson and Johnson did not give their cost break-up.

Kannaghi, though, is prepared to participate in bidding. “Barring southern India, self-help groups may not have taken to making sanitary napkins on a large scale. We shall exchange the technology and products and enable them to take up the task,” she added.

M Santhanam, who runs a sanitary napkin unit in Karnataka, said buying napkins from self-help groups would be the best deal for the government simply because of the price they quote.