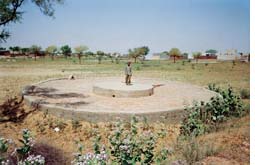 People in Rajasthan's Churu district have to make do with an annual rainfall of 350 mm. The area's high evaporation rate -- 2,600 mm -- aggravates water scarcity. But the people have learnt to live with the scarcity. In Churu, as well as in other areas of Rajasthan such as Bikaner and Sikar, people harvest rainwater in kunds dome shaped structures over an underground tank surrounded with an artificially paved catchment sloping towards the centre. Traditionally, these tanks were made up of lime, which acted as a disinfectant. The dome-shaped cover kept water cool during summers and reduced the load on the structure.

But the architecture of these water-harvesting structures is undergoing a change. Brahammanand, a resident of Indrasar village, recently got a 15,000-litre capacity kund constructed in his house. Unlike the dome-shaped traditional structures, Brahammanand's kund has a flat roof. It's also made of cement--and not lime.In fact, most newly-constructed ones in the area are made with cement, and have flat roofs.

"Cement is easily available. So making a kund with it is easy. Making one with lime is labour-intensive and time-consuming," Brahammanand says. Jagdish Jat, a mason agrees. "Lime has to be grounded well. This takes more than a day. It takes another few hours to prepare the mortar." Moreover, phog wood, used in making the traditional kunds is not easily available.
This does give them an advantage over traditional kunds modern ones are made on a raised platform, which does not allow suspended particles to flow into the tank.

People also prefer flat kunds because they save a lot of space. However, Ran Singh, who has made more than 350 traditional kunds, disagrees. He says, "Today people want instant results, but they compromise on time-tested techniques. The new tanks do not have a long life. The high evaporation rate in the area means that the steel bars used in the current-day structures are vulnerable to corrosion. So, these tanks can collapse easily. Traditional tanks, in contrast, last forever," he says.

Singh has a point. Tanks constructed more than hundreds of years ago can still be found in Churu. "The traditional kunds have an arch-shaped roof which gives strength to the structure, minimises evaporation and keeps the water cool even during hot summers," he says. Scientists also support Singh's contention. Rajiv Gupta, dean of engineering services division of Birla Institute of Technology and Science, Pilani, says, "Dome-shaped structures are more stable. Lime used to make the traditional kunds is as a natural disinfectant, while water has to be treated separately in the tanks made with cement," he says.
"Kund-construction involved locally-available raw material, local technology, and most importantly local people," says S M Mohnot, director of the Jodhpur-based School of Desert Sciences. Kund-making was a specialised vocation, and many in Churu, Sikar and Bikaner were skilled in making these tanks. Today there are very few kund-makers left, and the tanks are very often made by local masons. "Nobody wants the genuine kunds and their makers," says Singh.

Mohnot has an explanation "When people are provided water at their doorstop through taps, why would they bother about kunds." Government water supply is, however, erratic. "We got water yesterday after nearly a month and that too for about 2-3 hours," says Singh. Mohnot does not dispute this.In fact, he adds, "Today many people use kunds to store tanker water during a crisis. Earlier, kunds were not mere tanks to store rainwater, they were critical to equitable water distribution and were made to suite local topographical and climatic conditions." Traditional kunds had a channel from where the cattle could drink water, but the new structures have no such provision.

But this local knowledge is not totally extinct. Singh, for example, made a small kund last year. "There will be enough water throughout the year not just for my personal use but for my neighbours as well," he says.