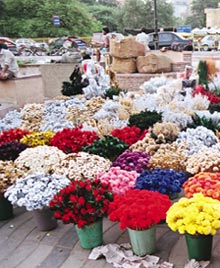 If one were to make a fleeting visit to an Indian city, the sight that would first greet the eyes would be a sky-scraping cluster of cement, with a pinch of green. With home gardens being the prerogative of a privileged few, most middle class homes are adorned with at least a few potted plants. The more ambitious souls buy flowers regularly as room dcor. Even fewer also own a small terrace garden.

Is the desire for green corners linked with environmental consciousness? In the West, greenery in urban centres could be understood as a form of vapid compensation for that which remains beyond reach most of the time -- the wilderness 'out there': 'in here' is mere apology. This is also true of India; but 'nature' in the verandah, roof or drawing room serves another purpose: it is an object that exhibits the 'nature-lover's' aesthetic sense. Might the desire for potted plants stem from the idea of a fancy, well-appointed, nature-loving home -- a dream that cannot be fulfilled, but a fantasy that must be lived, and invested in?
Gardens and potted plants typify how class and capital shape the boundaries of nature in urban centres of the country. The 'extent' of ownership of greenery is a physical proof of the class divide. In cities, where real estate prices are forbidding, gardening spaces represent middle and upper class consumption abilities, status, class and identity.

What's more, the 'aestheticisation' of landscape further 'politicises' the highly charged politics of the environment: deforestation is rightly attributed to the desires of 'only' the well off. The elite desire for owning flowers and plants, too, is a form of nature exploitation, though not an obvious one. But to an intelligent mind it implies that the 'urge' for nature further politicises the questions of equity, access and social justice.
The flourishing flower trade best illustrates the class politics and the aesthetic worth of nature. Indian soil nourishes a variety of flowers -- from the forever-loved roses to the exotic ones like gladiolus, lilies, chrysanthemums, anthuriums, zerberas, birds of paradise, tube roses, orchids, carnations, lotuses, pink gypsophyllums or gypsies and bells of Ireland.

The domestic market is growing manifold. "For instance, 10 years back, the turnover of Cannaught Place flower mandi of New Delhi was Rs 3 crore. Today it amounts to Rs 30 crore," informs Veerendra Kumar Singh, director of Camson Bio Technologies Limited, who sells flowers in the mandi, which is said to be the largest in Asia. Florists, displaying impressive arrangements, can now be found in virtually every major intersection of any Indian city.
Use of flowers to express feelings and decorating office interiors has become widespread. "The main thrust for the domestic market came in 1990s, when multinational corporations (mncs) set-up their offices," says Singh.

Indians deploy flowers only on occasions -- marriages, festivals, birthdays, marriage anniversaries and Valentine's Day -- as grist to the 'how to be different' mill. "Even a change of government becomes a reason for us to celebrate -- lots of flowers are sold to impress the mighty," reveals Ajay Barua, vice president of the Cannaught Place mandi. "The concept is mainly related to social status -- it is not 'fashionable' to give Rs 100 as a present, but the same amount can be spent on buying a bouquet, which then becomes a symbol of social status," asserts Singh.


The rich and those belonging to the upper-middle class mostly buy flowers in India. "But teenagers or youngsters from all sections of the society want to buy flowers because of their so-called western lifestyle. For many a 100 rupee note is just a piece of paper," says Ramakrishna Karuturi, a Bangalore-based floriculturist. The western culture indeed seems to make a difference -- sales have increased on occasions like mother's day and teacher's day. "But use of flowers for home decoration is yet not popular. It will happen once the market becomes more competitive," says Navneesh Sharma, deputy general manager, Agricultural and Processed Food Products Export Development Authority, Union ministry of commerce and industry.

Marketing played a crucial role in making flowers, or 'nature', a symbol of status and aesthetics. And media has proved to be the most effective tool. For instance, in the January 2004 issue of Cosmopolitan, Avon's Treselle has been described as an "opulent floral fragrance with notes of liquorice, spices and tiger orchid a scent for a female who wants to feel confident, sensual and sophisticated in her skin". Every visual description of an interior decoration magazine includes flowers or some other form of nature. Flowers have also been projected as the best way to befriend people to woo and even to end a lovers' tiff. Are these marketing strategies not a form of commercialising nature to benefit a few?

Kolkata, Sharanpur, Bangalore, Himachal Pradesh and Pune are the key growing centres due to their climes. New Delhi is the biggest consumption zone thanks to mncs, government offices, embassies and hotels.

The domestic market is an offshoot of increasing exports. "Indian floriculturists mainly farm to cater to the international market. The surplus comes to the domestic market," informs Sharma. In 1991-92, the value of floriculture export amounted to about Rs 1,480 lakh; in 1995-96, it was almost Rs 6,014 lakh and in 2002-03 it was Rs 17,486 lakh. India mainly exports to Australia, Belgium, France, Italy, Japan, Lebanon, Malaysia, The Netherlands, New Zealand, Saudi Arab, Singapore, Switzerland, the uk and the us.

While the global political economy of the flower industry is an interesting study in its own right, the rapidly growing Indian market -- both export and domestic -- does give a good insight about the patterns of consumption and possession of 'nature', and what they imply for class-based identities. The market figures are enough to convince anybody that nature indeed has become an object of consumption, possession and eventually rank display.